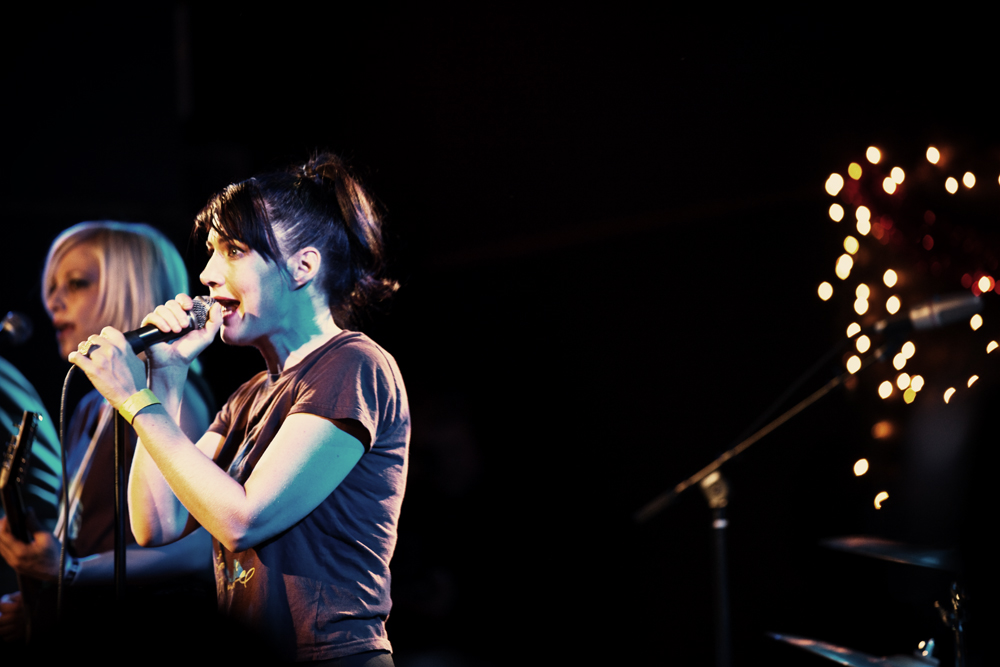 The career of Kathleen Hanna, lead singer of Bikini Kill and Le Tigre, is the subject of the new documentary “The Punk Singer,” which opens Friday at the IFC Center and Nitehawk Cinema.

The Punk Singer, Sini Anderson’s first feature-length documentary, opens with an archival clip of Kathleen Hanna performing in Olympia, Wash in 1991. The film, which opens at the IFC Center and Nitehawk Cinema on Friday, Nov. 29–perfect to clear you palate after a day of turkey and couch time–follows Hanna’s career as a feminist musician and riot grrrl pioneer.

“Feminism is a verb,” Hanna said during a Q&A after a recent screening of the film at the DOC NYC festival. “It’s something you do. It’s not something you are.”

In the early nineties, Hanna was a young artist looking for a medium that would allow her to spread a message of female empowerment and solidarity, and she found her outlet in punk music, as the lead singer of the riot grrrl band Bikini Kill, which she formed with fellow students at Evergreen State College in Olympia. The group didn’t bring innate technical skills to the stage—bassist Kathi Wilcox had never played the instrument before—but the band was a vessel for feminist poetry and activism, propelled by its captivating lead singer.

“She’s saying, ‘Look, I’m up here and I’m doing this, and people tell me that I’m not talented, or I can’t sing and we can’t play our instruments, but I’m doing it, so you can do it,’” said Anderson. “It was more about inspiring more women to action, rather than inspiring the people who are viewing it to change.”

Anderson assembled the film through a mix of interviews with Hanna and other artists and activists (Hanna’s husband, Adam Horovitz of the Beastie Boys, provides the sole male voice) and archival material. Early performance footage shows Hanna as an effervescent, inimitable spark plug in a ponytail, at once sexy and grim, thoughtful and provocative, angry and vulnerable. She bopped around on stage in a crop top and shorts, with SLUT scrawled on her stomach in black marker, and pushed to make the punk scene—which was dominated by violent mosh pits—a safe space for women.

“It’s the message, it’s the music and then it’s the package that it’s in,” said Jennifer Baumgardner, executive director and publisher at The Feminist Press who also appears in the film. “Some people are very charismatic and that’s a gift that they have and people are drawn to them. They have a public persona that feels totally personal and I think she has that.”

The Punk Singer also explores Hanna’s struggle with late-stage Lyme disease, which prompted her to leave the band Le Tigre in 2005. The film approaches Hanna’s illness and recovery with a quiet intimacy reminiscent of home videos (some of the more intense scenes were filmed by Horovitz at his wife’s urging). The result is a well-balanced film about Hanna’s music and her message, but it’s also a comeback story about a performer who still has a lot to say: Hanna’s latest band, The Julie Ruin, released its debut record, Run Fast, in September and is touring in support of the release.

“I would be sick in bed for two weeks,” Hanna said about recording with The Julie Ruin. “Then I’d have three days and I’d just drink a bunch of coffee and just sing as much as I could over those three days and drive my neighbors crazy. It gave me a lot of hope, because I had a reason to get better. To finish this record.”

Fans of Hanna’s will find plenty to enjoy, from the archival footage of frenetic stage shows to interviews with Joan Jett and Kim Gordon of Sonic Youth. But for those who showed up late to the riot grrrl party, the music and message still feel modern and fresh. In contrast to stale retreads of nineties fashion, Bikini Kill’s anthem, “Rebel Girl,” is every bit as infectious as it was 20 years ago.