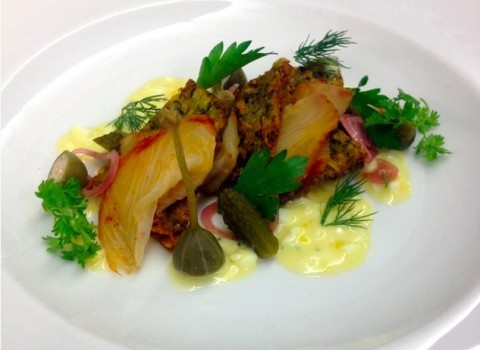 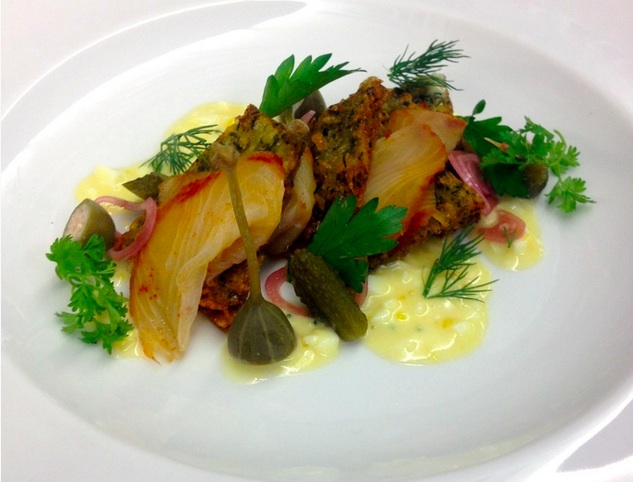 Chef Steven Hubbell updated old recipes from the turn of the 20th century with creative twists, like his smoked sablefish with potato pancakes, egg sauce and herb salad. Photo: 1 Knickerbocker

The building at the wedge-shaped corner of Knickerbocker and Johnson avenues in Bushwick has been a speakeasy, saloon, dance hall and brothel, before transitioning to more recent industrial uses. Its latest reincarnation is–you guessed it–a hip restaurant and bar with lots of retro, reclaimed decor. Opening Tuesday night, 1 Knickerbocker will feature the now-standard Brooklyn design scheme of 19th- and turn-of-the-century details like tin-accented ceilings and wood beams salvaged from the actual Arctic Saloon that once occupied this space.

What sets the restaurant apart from 100 other places that have opened over the past few years is that the menu also harkens back to early 1900s New York.

While few people would point to the nineteen-aughts as a seminal era for American food, 1 Knickerbocker co-owner Jesse Levitt says it was a time when food, especially in New York, came into its own. “In turn-of-the-century New York, the kind of food that was served at higher-end restaurants here was very European, high-end-cuisine-inspired, but people were just starting to take advantage of all the produce and foods that were available in America, but not Europe at the time,” says Levitt. “It was the start of a real American cuisine that distinguished itself from European and French food for the first time.”

To bring Gilded Age cuisine up to modern standards, 1 Knickerbocker’s chef Steven Hubbell looked through 100-year-old recipes. He incorporates then-newly-exciting foods like wild North-American game, fresh local fish, and oysters into the menu, updating them with some creative new twists.

The restaurant plans to have some kind of game meat on the menu whenever possible, in dishes like roast elk with spaetzle, chestnut and red cabbage. There are also plans for venison and duck dishes in the works. Your more standard meats also come in adventurous old-style platings, such as fried pig ear with pickled pepper mayonnaise and curry leaf. Local fish are given inventive treatments, like a skate wing cooked with the bones in, so as to keep the moisture and flavor intact throughout the cooking process, then served with hazelnut caraway vinaigrette, orange, crushed beets and beet sprouts.

In a 1900s fad that’s right at home in 21st-century Brooklyn (or a Portlandia episode), the in-house pickling operation encompasses everything from a pickled Scotch egg, encased in chicken sausage and dipped in black garlic mayo, to cauliflower, which is pickled, then fried, and served over a roasted cauliflower cream. House-made bitters and herb infusions dot the handcrafted winter cocktail menu, featuring house-made egg nog, hot punch and a “Hot Scarecrow” made with bourbon, apple-nettle tea and cloves.

The restaurant opens Dec. 17 for dinner, with a late-night menu and weekend brunch coming soon.