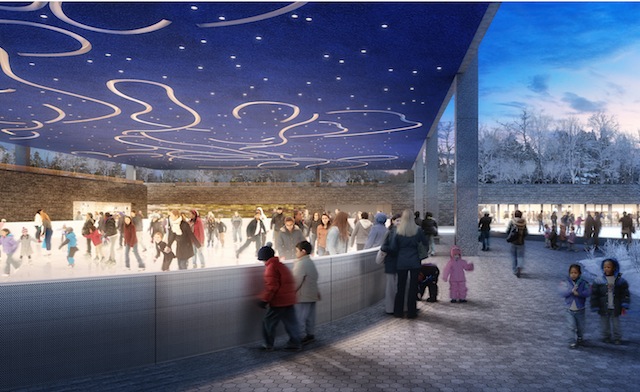 Bloomberg may not have made the city more affordable, but he helped make its parks bigger, better, and more spectacular than any other mayor in our lifetimes, leaving us with plenty of green space to forget, for a moment, what we spend on rent. This Friday, another crown jewel of his legacy opens–Prospect Park’s $74 million dollar Samuel J. and Ethel LeFrak Center (a name familiar to anyone who has ever passed beautiful LeFrak City on the L.I.E.). What that means for us this winter are two mammoth ice rinks, one covered by a green roof whose ceiling resembles a starry sky, and an uncovered one closer to the lake and reminiscent of skating on a frozen pond, like New Yorkers did in Olmstead & Vaux’s time. While it seems strange that anyone would miss “the old funky crappy homely rink with its barebones facilities and unhealthy snack bar,” as one commenter claimed he would on this video preview of the rink, the Robert Moses relic couldn’t deliver the year-round fun the new LeFrak Center will, when it turns into a water play area and roller rink from April through October. Park goers can also now enjoy 26 restored acres of the park’s Lakeside section, including eight acres we never even used before. Starting Friday at 9 am, you can get a rink-side glimpse of this gift to the city seven days a week, for $6 on weekdays and $8 weekends (skate rentals are $5). Enter at the Parkside and Ocean Aves. entrance.