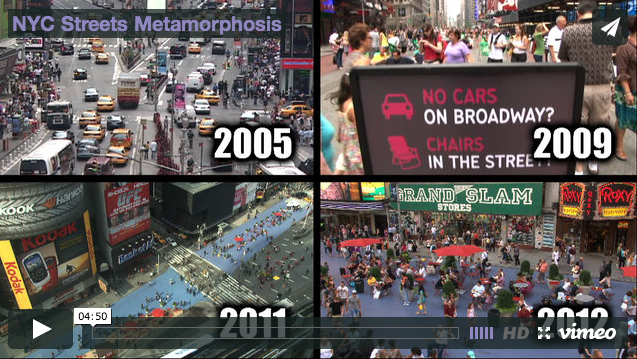 Today marks the end of Mayor de Blasio’s first full week in office and despite the rotten, cold, snowy and now wet weather, it’s business as usual in the city. Including on the city streets.

As we mentioned in our round-up of 10 stories we think you’ll be talking about in 2014, during his campaign de Blasio outlined a comprehensive, Scandinavian-inspired plan to make the streets of New York City safer for pedestrians, cyclists and motorists, too, called Vision Zero. The basic idea is that our roadways, intersections and sidewalks, and the laws that govern them are a system and that a properly functioning system will eliminate traffic deaths. Mayor de Blasio aims to reduce traffic fatalities and major injuries in the city to zero by 2024. Naturally, the adovocy group Right of Way has put up a Vision Zero Clock, keeping tabs on whether the city is on track toward lowering the traffic fatality rate. It isn’t. So far this year three pedestrians and four drivers and passengers have died in New York City.

What exactly does de Blasio plan to do to make our streets safer?

In his comprehensive transportation plan, the mayor proposes adding more neighborhood slow zones where speed is reduced to 20mph (it’s 30mph everywhere in the city unless otherwise marked), identifying and reconfiguring at least 50 dangerous roadways and intersections each year, and expanding bike lanes. His new police chief, Bill Bratton, has pledged to spend more police time and energy on traffic safety and on ticketing traffic violations like speeding. Alternative transportation advocates (though, it seems strange to call walking and biking “alternatives” in a city where the majority of residents aren’t car owners) have suggested that applying a “broken windows” style policing strategy to traffic laws–stopping motorists consistently for speeding, failure to signal (yes, it is the law that you have to signal before you turn or change lanes, even in New York City) or failing to yield–could do to road safety what Giuliani’s crackdown on graffiti, fare dodging and public drinking may have done for violent crime in the 90s.

As someone who walks and bikes a lot I’m consistently awed by how fast many drivers seem to think it’s okay to drive, especially through residential neighborhoods. Going from zero to 50 and then stopping again in a single block seems like a really frustrating way to drive and it definitely doesn’t prove that your car is awesome, thanks anyway. The good news though, is that Transportation Alternatives, has a few different tools you can use to make your neighborhood streets safer, including links to request a speed camera for a dangerous intersection, apply for a 20 mph Neighborhood Slow Zone, or you can generate data about speeding in your community using their Speeding Toolkit.

Crowded roads and tension between motorists, cyclists and pedestrians is not a problem unique to New York, although certainly European cities seem more willing to go radical with their solutions. Brussels, which has been called “a sewer for cars” by French critics, has a new mayor who has proposed eliminating cars in the city center. Lord Norman Foster, a British architect, has proposed and designed a 220km system of cyclist skyways to be built on top of London’s commuter rail system to provide the British capital’s cycling community with a safer, faster routes. And, in small town America, engineers with an eye for what makes places livable are calling for an end to “stroads”–four lane roads lined with businesses that are too slow to efficiently move cars, but wide enough to inspire highway speeds. Sounds like Queens and Bruckner Boulevards, two of the most dangerous roadways in New York.

Reducing the number of traffic fatalities is going to depend on the NYPD actually investigating crashes that injure or kill cyclists and pedestrians, ticketing motorists for speeding and not yielding and enforcing traffic laws. It’s ridiculous that it hasn’t been of more concern to the NYPD in recent years–anyone who has ever been to a community board or neighborhood safety meeting knows that speeding has long been a problem all over the city. The thing that really burns my biscuit, is how much time and effort the NYPD put into using stop and frisk to police suspicion of a crime, when speeding, which is actually a crime, can be observed with no effort at all. Stop and frisk speeders and see how long it takes to make the streets safer.

But, it’s also heartening to remember that much of de Blasio’s plan is an extension of changes that have already been taking place for years. Bloomberg transformed the city in a variety of pedestrian and cyclist friendly ways, that are pretty stunning when you watch the changes in sequence in the video above. If we can just put the kibosh on speeding and stroads, then New York will be the walker’s paradise it was meant to be.