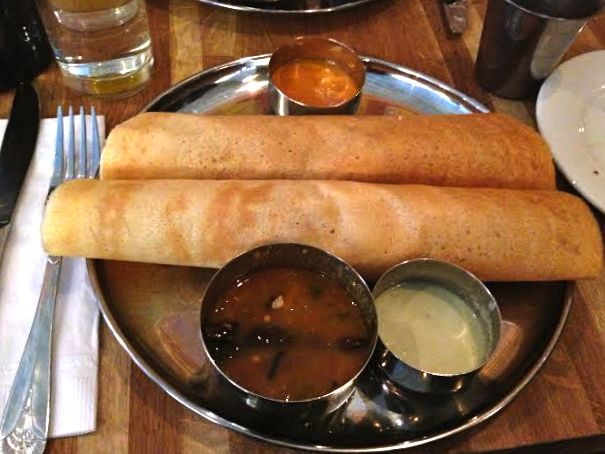 Considering it’s home to 17% of the world’s population and more ethnic groups than practically anywhere on earth, the diversity of India’s food scene gets short shrift in New York. We’ve got hundreds of restaurants serving chicken tikka masala (an only kind-of Indian dish that was actually invented in the U.K.,) but few that branch out into the many lesser-known genres of sub-continental cuisine. Dosa Royale, which just opened its doors in Carroll Gardens, is one of only a handful of Brooklyn restaurants specializing in the spicy flavors of South India, good news for fans who previously had to travel to New Jersey, Queens, or one of a scattering of local South Indian hole-in-the-walls like Ghandi in Prospect Lefferts Gardens.

Dosa Royale, an offshoot of a successful Smorgasborg stand, is run by the same husband-and-wife team behind Fort Greene’s excellent Italian restaurant Dino, and unlike most no-frills Indian spots, it features a very New Brooklyn-y design scheme complete with exposed brick, blond woods and an open kitchen. However, it’s the strictly South Indian menu that makes Dosa Royale notable. The namesake dosas–giant, super-thin pancakes made from a batter of rice and black lentils–are filled with a variety of spicy-savory veggie options such as red onion with curry leaves, roasted cumin, fresh coriander and curried potatoes. At brunch, they come stuffed with South Indian-style scrambled eggs (with chilis, tomatoes and onions). There is also uttapam–a thicker, flatter variety of pancake with green chilis, onions and tomatoes cooked right into the batter. All are served with a delicious assortment of chutneys and spicy sambar dipping sauces, and can be amped up by adding mysore, a spice blend with a lot of heat, or gunpowder–a thick, slightly-sweet lentil-and-sesame based concoction.

Elsewhere on Dosa Royale’s menu there are very tasty small plates based on Indian street food snacks such as vendakai poriyal, a snappy mix of crispy-fried okra bits thrown together with coconut, curry leaves and crunchy mung beans, as well as the more familiar lamb-filled samosas. There are also thalis–platters of eight to 10 small cups filled with sambars, curried veggies, yogurts, pickles and the like–IMHO one of the best ways to sample a wide range of Indian flavors.

Keeping with the New Brooklyn-y motif, this is one of the few spots where you can enjoy your Indian cuisine with craft cocktails like a Madurai sour (bourbon, lemon, tamarind and rose water), or enticing non-alcoholic drink options such as the black sesame fizz (housemade black sesame syrup with lime and seltzer). All of the food and drink I sampled at Dosa Royale was delicious, and best of all, despite the somewhat upscale trappings, the prices are only slightly higher than your standard Indian take-out spot, with entrees ranging from $8 to $12 at brunch, $10 to $18 at dinner.