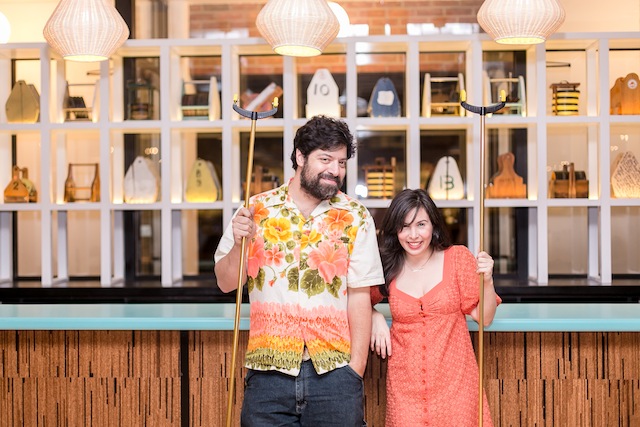 Royal Palms owners Jonathan Schnapp and Ashley Albert before their collection of vintage biscuit baskets (there’s a lot to love about the lingo of this sport). Photo: Phillip Van Nostrand

UPDATE: The free tickets went in a jiffy but we have a good feeling we’ll be able to offer more. Stay tuned.

If you still don’t know how much fun you can have with a biscuit and a tang, The Royal Palms Shuffleboard Club is about to introduce you to your new favorite sport. While the official opening is still a few weeks away, Brooklyn Based subscribers can get a special sneak peak next Wednesday, Jan. 22, when The Royal Palms invites us for a night of free shuffleboard from 7-11pm.

The club has been hosting a few of these preview events for their Facebook fans as they prepare to open in early February. “So many people we haven’t met before have been following this journey through Facebook. We wanted to thank them for supporting us and being part of this community,” says Jonathan Schnapp, one half of the brains behind The Royal Palms. He and co-owner Ashley Albert came up with the concept during a trip to Florida in 2011, where a visit to The Mirror Lake Shuffleboard Club in St. Petersburg inspired them to bring the game of many Floridians up north. Like everyone else, we’ve been anxiously awaiting this opening. And after checking out their first preview event, we can officially say: you’re gonna have a lot of fun sliding biscuits and tossing back drinks here.

Through their earnestness and enthusiasm, and the sheer uniqueness of opening a shuffleboard club in New York, they amassed an all-star roster of architects, designers and a construction team whose shared portfolio includes The Standard, Marc Jacob’s house and many other fancy places. “All these incredible people jumped on board to be a part of it, better people than we thought we deserved, and made it the beautiful place that it is,” says Schnapp. 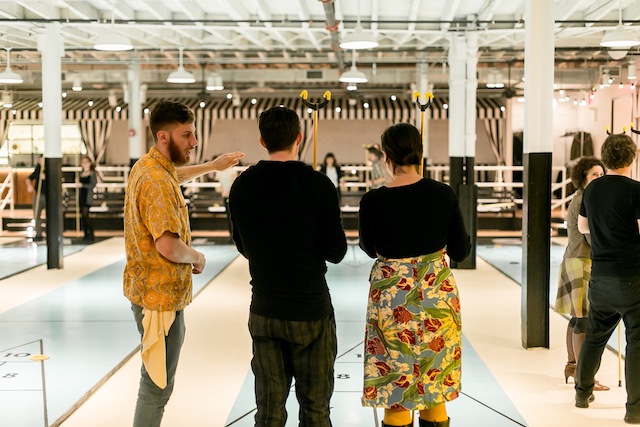 The Royal Palms staff will be at the ready to explain the game next Wednesday. Photo: Phillip Van Nostrand

It’s not over the top though–you will not feel like someone dropped a Miami nightclub in the middle of Gowanus, though you will feel a little warmer and more festive inside thanks to the strings of globe lights, black and white cabanas, 10 turquoise shuffleboard courts, and the rotating selection of food trucks.

Most importantly, you will be thankful that snowbirds no longer have a monopoly on this pastime. It’s a very social game, more like bocce than bowling, and since teammates play on opposite sides of the court, you’ll likely spend a large amount of time talking to and befriending one of your competitors. The appeal is so strong, its Monday night league is already fully subscribed, with 60 teams of six players each, and there’s a waiting list in the works for a possible Tuesday night league.

“I just love to see people getting really into the game,” says Schnapp.

We’d love to see you on these gorgeous courts, too, so be sure to RSVP for our free night of shuffleboard at The Royal Palms next Wednesday (there’s just 200 spots, so do it quick!). The game takes a minute to learn, and many biscuits to master, so let’s get started together.