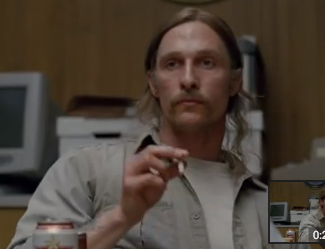 It’s been a big week in television: Girls, True Detective, Mad Men, Just Call Saul, Game of Thrones and Brooklyn Nine-Nine were all stories in their own way, the Golden Globes happened, and all my favorite network trash is finally back on the air after the midseason break.

First, here’s the news. Mad Men, season seven premiers on April 13, and just like Breaking Bad, this final season will be split into two parts. A few on-set photos in Los Angeles have been circulating this week.

Looking, a new comedy that has been touted as Girls for gays premiers on HBO on Sunday. Here are some thoughts on the new series from BB pal, Alex Abad-Santos.

Game of Thrones will be back in all its bloody, bawdy glory on April 6. Judging from the trailer, season four has a lot of Jamie Lannister action (sadly, no sight of Brienne).

Better Call Saul, the Breaking Bad spinoff, is coming out on AMC in November, and creator Vince Gilligan says that he wants Bryan Cranston and Aaron Paul to make cameo appearances on the show.

Brooklyn Nine-Nine won a Golden Globe for Best TV Comedy. Maybe it’s time to watch an episode or two? The Golden Globes themselves didn’t have nearly enough Tina and Amy, and came across as Hollywood’s holiday office party.

Now a question. When did Matthew McConaughey become a good actor? I mean, he’s always been charming in a bongo-playing, board short-wearing kind of way, but lately he’s been downright impressive on screen. In Dallas Buyer’s Club, he plays this rawboned dirtbag with a streak of stubborn intelligence and the portrayal is so much more than simply method acting trappings of losing 45 pounds for the role. (A total aside, I thought it was a huge oversight that neither McConaughey nor Jared Leto thanked the real people the movie was based on, most of whom are dead, when they won Golden Globes for their performances.) And he’s almost unrecognizable in True Detective. Which, if you like procedural dramas as much as I do, you’re going to love.

Forbes did a story about how Nic Pizzolatto, the creator of True Detective, wrote all eight of the episodes that make up this first season, and then hired Cary Fukunaga to direct all of them. That’s just not the way television is made. The first episode was jaw-droppingly good, both procedurally pulpy and also strangely existential, with a narrative structure that takes us back and forth across 20 years and into the backwaters of Louisiana. McConaughey and Woody Harrelson play detectives, uneasy partners, and they couldn’t be better together. Really, they’re two of the most surprising actors working right now. Who would have thought that Harrelson would evolve so far away from the Woody we met on Cheers and McConaughey so far from his infamous “I get older, they stay the same age” drawl in Dazed and Confused? I do wish though, that we could start a crime drama without a dead naked girl, posed in some macabre but ultimately meaningful way. Just once.

HBO also has this little show called Girls and season three started last weekend, and you can watch the first two episodes on YouTube, should you not have access to HBO or someone’s HBOGo password. The Lena Dunham controversy of last week–a TV writer asking her why she is naked so often on the show and her telling him that what she’s doing is capturing what it’s like to be a person, to be alive, and if he doesn’t like it, that’s because he has a problem with her particular body and that’s his to deal with–is over. The Lena Dunham controversy of this week–how much Vogue Photoshopped her photos in the new issue, which she is on the cover of–has begun. Time to go catch up on Nashville, Law & Order: SVU, Bones and everything else wonderfully terrible in the world.