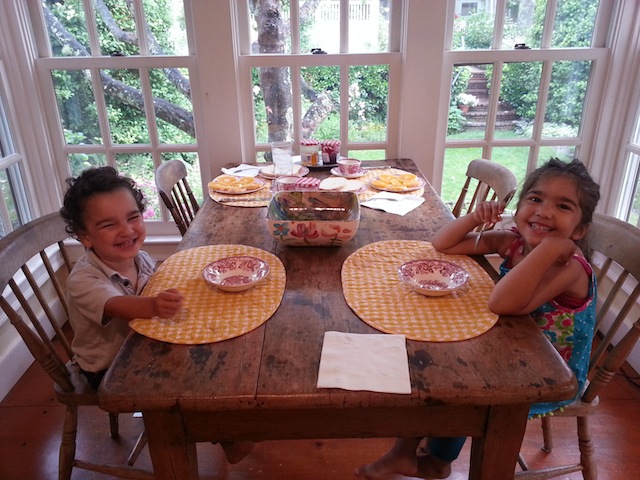 Five years ago, Amy Hamberry revolutionized the healthy junk food world with her take on kale chips. Food writers and New Yorkers–perhaps even you!–go nuts for her brand, New York Naturals, because they’re crunchy, packed with bold flavors like curry and cool ranch, and seemingly as deep fried as a potato chip (they’re actually just dehydrated). Together with her husband Joe Orr, they produce the kale chips locally in their Crown Heights “Kale Factory,” along with other vegan snacks like Greenola and Kale Krackers (you can find them at Back to the Land, Whole Foods Brooklyn, the Park Slope Food Coop, and online). Not surprisingly, their little girl Gaia Rose, who is five, and boy, Schuyler, 3, aren’t always enamored with their parents’ products. Here’s what does work in the Hamberry-Orr’s Park Slope home, for breakfast, lunch and dinner.

What kinds of eaters are your children?

Gaia takes after my husband’s side of the family. She’s picky. Once she finally picks a food she’ll eat, she’ll eat it very slowly and neatly. Schuyler takes after my side of the family. He’s up for eating anything. He decides he doesn’t like a certain food after he’s chewed it. Then he’ll spit it back on his plate. He is also a fast eater. He eats twice as fast as Gaia Rose who is two years older than he is.

What kinds of foods did you give them from the start? Do you feel like you influenced the way they eat now?

They were both breastfed until they were 3 and I made their baby food in a Vitamix blender using organic fruits and vegetables like peas, beets and mangoes from the health food store we used to own.

Today, they will gladly eat vegetables and fruits but I don’t think what I did the first few years made them more incline to reach for fruits and veg. If there were a choice between cookies or strawberries, they choose the cookie.

Are you vegan or vegetarian and are your kids the same? How did you arrive at that decision?

We accidentally fell into a vegan lifestyle when we became minimalists in the kitchen. Having two small children, (one picky eater and one becomes picky by association), we found it difficult to make elaborate meals every evening. Our grocery bill topped $250 bucks a week buying meats and expensive cheeses. Fed up, we did an experiment. We bought $80 worth of food and tried to make it feed 4 mouths for one week  It worked! Our diets changed. Instead of munching on cheese sticks, my kids munched on apples. But we would never restrict our kids from any foods. We make them macaroni and cheese, wild salmon and organic chicken. They truly need the protein. They’re still growing. We never offer red meat and when we do bring poultry and fish in the house, it is from top quality butchers like Fleisher’s grass fed and organic meats.

What’s a typical breakfast like for you and the kids?

On Saturday mornings we make organic Kale Pancakes in the blender using kale powder from our factory. Recently, my kids are on a kale strike and refuse to eat anything with kale in it [Ed. Note: with one exception, below.] We’re back to normal pancakes with sliced apples.

A typical lunch for them?

Gaia Rose and Schuyler both eat lunch at school. Gaia Rose loves sandwiches that are made by her daddy. They are made with sunflower butter and jam on bread. Schuyler’s school offer them catered lunch from Red Rabbit which provides locally sourced farm fresh foods like quesadillas but he prefers the same lunch as his sister, a homemade sandwich made by his daddy.

What are your go-to dinners for the family?

I use our rice cooker on a daily basis. I throw in different grains, seeds and rice in the cooker and make a side of vegetables like broccoli or green beans. Lentil Burgers are a big hit in our house.

Do you try to eat together or feed them first?

Actually, I feed myself first so that they can be ready to eat a nice warm meal. Gaia and Schuyler sit together facing each other. I serve them dinner in small plates starting with vegetables, protein and then carbs. The kids enjoy using Bambu condiment cups to add spices and sauces to their meals. They love passing the Bambu cups to each other.

What do you keep on hand always (in the freezer or pantry) for last-minute meals?

Our last minute “meals” are bars. Our family loves to eat bars. The kids love LaraBars and will eat them as an appetizer while I muster up the energy to boil pasta.

How often do you order take out?

We used to order in a lot. We’ve come to a point in our lives where ordering in is a defeat. Rather than order in, we’ll scan the pantry and use up food we didn’t realize we had! We want our kids to
realize that ordering in frequently is an unhealthy habit.

We let our kids be kids and enjoy sweets and junk. My husband and I don’t restrict sweets and junk foods but rather empower them to practice moderation when eating sweets and how to make healthy choices on their own.

What’s your policy on introducing new food or encouraging your children to eat things they’re not interested in?

We rarely encourage our kids to try something they’re not interested in unless it’s a new kale product we’ve made. However, the kids don’t take part of our product research anymore. We use our friends as guinea pigs now.

Do they eat your Kale Chips or any other New York Naturals snacks?

Schuyler is a huge vegan cheese kale chip fan. He’ll devour an entire box in one sitting. Unfortunately, Gaia is exhausted from eating kale chips. I don’t blame her, really. She is inspiring us to make a kid-friendly kale snack for picky eaters.

Are there any cookbooks you refer to often?

Recently, I’ve been making recipes from VB6: Eat Vegan Before 6:00 to Lose Weight and Restore Your Health for Good by Mark Bittman. Cooking vegan really allows us to enjoy lots of grains, nuts and seeds that we wouldn’t normally eat.

I soak and make chickpeas in my rice cooker and use them to roast in my oven, but if you’re fixed for time use a 16 oz. can of chickpeas, rinse them, lay them on a cookie sheet, spray them with coconut oil, sprinkle sea salt and roast for 30 minutes at 450 degrees or until golden brown. If you let them roast longer you’ll make chick pea chips. So yummy!