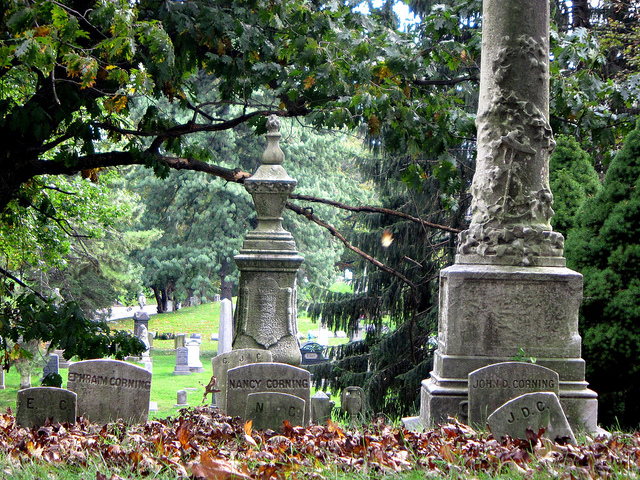 Sifting through a year’s worth of receipts to file your taxes might feel less formidable after you hear what researchers at the Green-Wood Historic Fund have been up to. The stewards of one of New York’s largest and oldest cemeteries recently organized every scrap of paper they’ve collected since 1840 as part of a new genealogical research project that has the potential to add branches to the family trees of 20 million people–kind of like Who Do You Think You Are? does for celebrities.

“The number that you see widely cited is that 1/7 of Americans can trace their roots back to Brooklyn,” says Jeff Richman, historian at GWHF. “Ken Jackson, an expert on U.S. cities, seems to think that, given the number of people who came through Ellis Island and that a substantial number of them settled that in Brooklyn, it comes out that probably 20 million is a bit on the low side.”

Answer a few questions online to start your Green-ealogy and researchers will scour their records and tell you what they can unearth about your family roots. Not sure if you know any of the 560,000 people interred at the cemetery? Start by checking out Green-Wood’s burial search database.

An initial review is free, but if you want to know more, it’ll cost you $28 per half-hour to have them conduct a full report. Full reports typically take two weeks to compile and can contain information on each burial, the cause of death, age at death and late residence, as well as the names of other family members, original family and business correspondence and other unique documents, which,  depending on the person, can include wills, family trees and letterheads from business stationary.

“We had a woman inquire about a man who led a fascinating life,” Richman says. “He was a confederate officer in the Civil War who was arrested in New York City as a spy. He fought in Italy for Italian independence after the Civil War.  It turned out I had researched this guy as part of our Civil War project and found a photograph of him that, with all of her research, she had never been able to find.”

Puzzling together ancestral pasts has proven to be as informative for Green-Wood’s historical researchers as it has for descendants who come seeking information, Richman says.

“For us to be able to fill in those blanks and answer those questions in a way that no other institution could because we have these millions and millions of records that no one else has is a great opportunity that we, as a historic fund and as a cemetery, want to be able to share with the public,” he says. “It’ll be interesting to see what they learn and what we learn.”