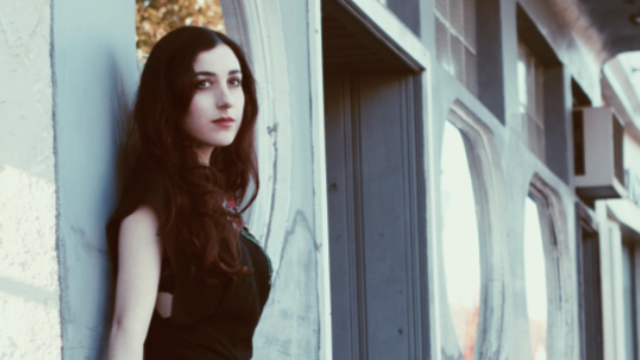 For the Boston-based singer-songwriter Marissa Nadler, 2014 marks a series of new beginnings in her 10-year recording career. She has a beautiful new record, July, which came out yesterday and is her debut release for the Brooklyn-based record company Sacred Bones, and she’s kicking off her upcoming U.S. and European tour with a show at Brooklyn’s Glasslands on Feb. 8.

“I’m glad that the reaction seems so far to be positive,” Nadler told me about July prior to its release. “I hope it does well. I’ve been around long enough to not get my hopes up.”

She needn’t worry, as the new record continues the lush, hazy and dreamy folk-influenced music from her previous works–if you haven’t listened to her work, you’ll definitely hear the influence of Kate Bush,  Tori Amos and other bewitching songstresses on July. Must-listen tracks include “Dead City Emily,” whose storyline is a conversation between friends about a relationship, according to Nadler; the hauntingly gothic “Was It a Dream,” which juxtaposes beauty and darkness with the repeating lyric: “Was it a dream?/Or something sinister;” and the achingly romantic “1923.”

“There’s definitely a thematic thread through the record,” Nadler said. “The title comes from the fact that the record was recorded in July, exactly a year after the July before kind of details the events of my life almost in chronological order–from one July to the next. Somebody doesn’t need to know that to enjoy the songs individually. It’s not like it’s a concept record, but there’s definitely a theme.”

Helping her realize that theme is producer Randall Dunn (his previous credits include the drone metal bands Sun O))) and Earth), who worked with Nadler for the first time on the record. “I think part of the reason why I wanted to work with Randall is because he had worked with a lot of various atmospheric artists and that’s always been a part of my aesthetic to make the dreamscapes,” she explained. “Some records have been more successful than others at that particularly quality of kind of atmosphere. I think it’s just a nice match in terms of our aesthetics matching up in a nice way.”

Nadler concludes the record with a beautiful but depressing piano-dominated ballad called “Nothing in My Heart.” “It’s a song about feeling empty,” she says. “It’s definitely a strange way to end a record. I think it’s kind of funny to end a record. I have a kind of dark sense of humor. My mother actually called me up and she’s listening to the record. And she was like, ‘Are you okay?’ I think that’s probably the saddest song on the record.”

With the lush nature of the music and the poetry of lyrics, you have to wonder if she’s writes from personal experience, imagination or a little bit of both. “It’s definitely a combination of the two,” she said. “When I was younger, I think I was really afraid more afraid writing confessional songs. So I would write more imagination based stories. It’s just my tastes have changed in terms of what I mostly respond to when I listen to music. I really like pure and sincere songwriters. I try to strive to say the honest truth in a song.”

With eight albums under her belt, the Boston-based artist now says she’s seen a lot during the last decade.

“It’s a difficult business,” she says. “There’s been a lot of ups and downs in my career—things will start seemingly good, and then something bad will happen. So now I think I just have a lot more perspective on it and making music for the right reasons, and kind of nothing else matters. As you get older, you realize more and more what you could live with and what you can live without. There was a place in my career where I thought, ‘Maybe I’ll give this up.’ I have a [part-time] job as a fine arts teacher. But I don’t think I’m capable of not being an artist, if that makes sense.”