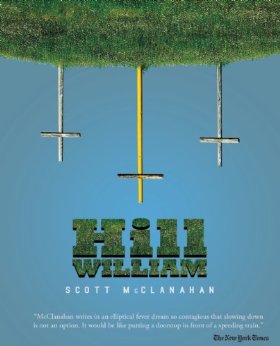 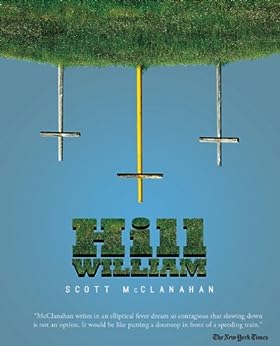 Writing in Booklyn I receive at least one book in the mail per week. Sometimes I ask for them and sometimes I don’t, but I try to read all of them. Unfortunately I read about as quickly as I digest lactose, so sometimes the books have a tendency to pile up.  I’ve just returned from Toronto, covering a battle rap event. Rap battling is just like an installment of the Franklin Park Reading series–if the readers were really mad one another. During the flights I got a chance to catch up on two books I’d been meaning to read for some time now.  So, here’s your fiction and non-fiction book of the week.

Fiction
Hill William by Scott McLanahan (Tyrant Books)
I’m not sure there’s a young writer alive who had a better 2013 than Scott McLanahan.  His name was on the tip of the tongue of every taste-maker in every literary cluster across the map and his persona has garnered almost as much notoriety as his prose. His animated reading style is so beloved that he was included on a list of the best things to see in New York City–apparently seeing a McLanahan reading is on part with Sleep No More as far as entertainment is concerned.  Hill William is the name of McLanahan’s debut novel. It was probably the most anticipated debut of the year and it managed to live to hype.

McLanhan employs tactics with his prose that are likely to either enthrall or infuriate you depending on how you enter into your reading experience.  He might end a story with “Who the fuck knows?” He might throw in a chapter shorter than a a Negative Approach song. He might leave you confused as to whether you are reading short stories in a collection or chapters in a novel and you might find yourself infuriated when he talks about moment of utter and profound emotional intensity with absolute detachment, and when you’re done feeling confused and angry and sad you might laugh, because you might realize that he was just doing what he intended to do all along: drag your across the spectrum and milk your emotions without you even knowing. Or maybe not, maybe he’s just writing–who the fuck knows. 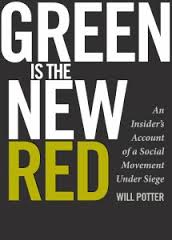 Green Is The New Red by Will Potter
Allow me to start this recommendation off with another recommendation. One of the most talented new filmmakers/actresses Brit Marling wrote and starred in a film last year called  The East. It stars Alexander Skarsgard and Ellen Page and it presents a fictionalized version of some of the events in Green Is The New Red. The East is my pick for Most Underrated Film of 2013. But, to truly understand the issues, minus the sex and sensation, you must read Potter’s book.

Eco-terrorism is a buzzword conceived of in the 90. The term refers to groups that cause property damage and financial sabotage in the name of the environment. The two predominant groups in this country who take responsibility for such actions are the ALF (Animal Liberation Front) and the ELF (Earth Liberation Front.) The ALF have broken in the labs and freed test subject animals and released horses from stables. The ELF have burned down ski resorts and set fire to SUVs in the name of the environment; collectively they’ve caused millions of dollars in property damage. Much like the Weather Underground, a group that was identified as domestic terrorists in the 60s, they’ve not yet harmed a single human being in the course of their direct actions.

Green is the New Red delves into a few of the most interesting cases of so-called eco-terrorism, namely SHAC 7 and The Family cell of the ELF and specifically Daniel McGowan–an activist turned domestic-violence victims-advocate with a teddy bear-like appearance who’s currently behind bars for his part in ELF direct action.  Will Pottermanages to show us the wider picture of this type of activism without being blinded by the minutia.  In the end, Green Is the New Red focuses in on a very interesting movement in our recent history and the ways in which it was used to blind the greater public from the failings of national security.  Through the scope presented by Potter it’s hard not to get into the heads of these young people who  were moved to such extremes.

Green is the New Red is an important book and I highly recommend reading it. The story of Daniel McGowan leading up to his arrest is also told on film in the documentary If A Tree Falls. It’s a subject worth studying up on. It’s about the age we live in. It’s about our youth and the future of our planet and about a kind of passion that, if you’ve yet to read this book, you might think no longer exists in the current generation of young Americans.