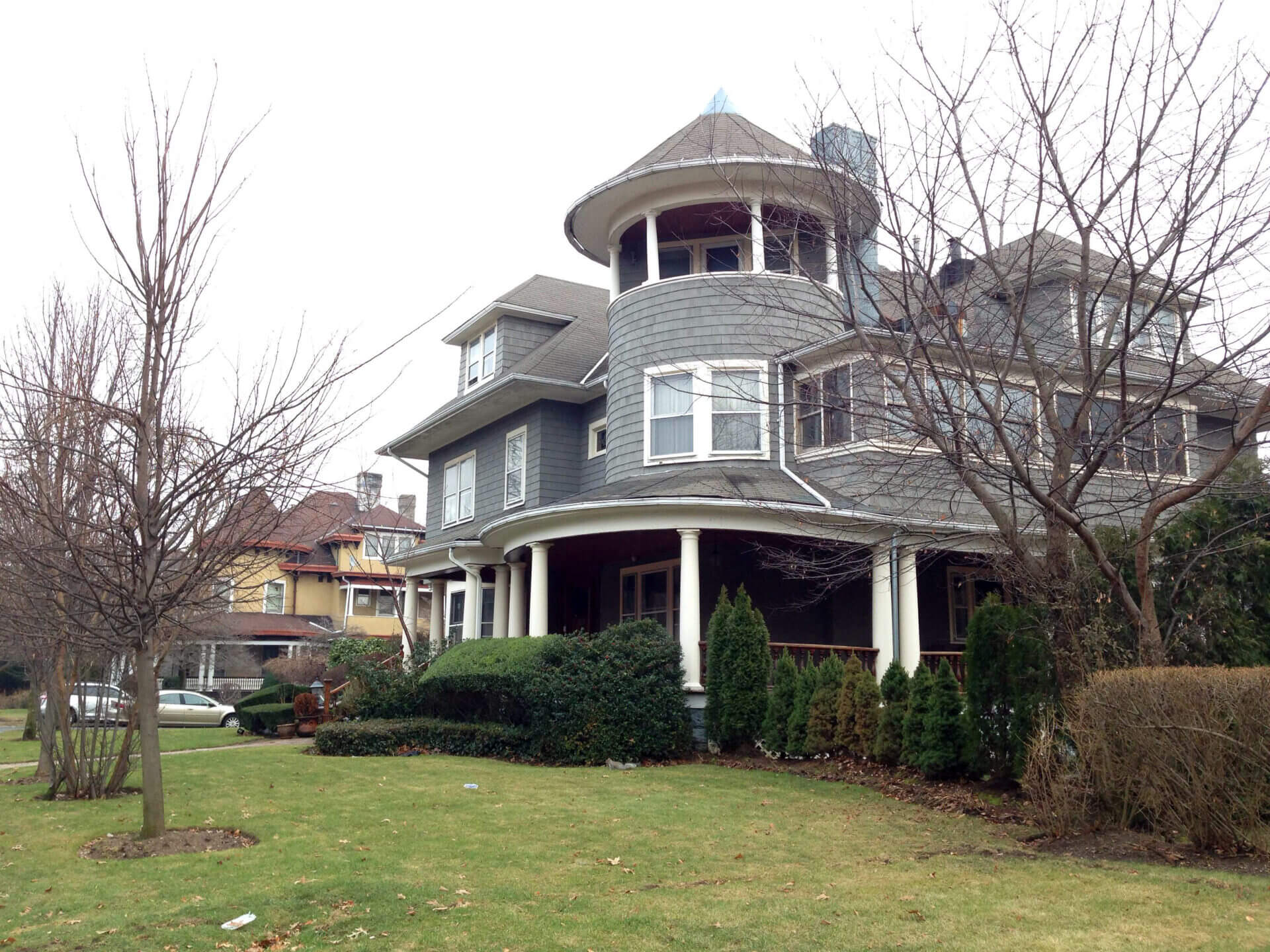 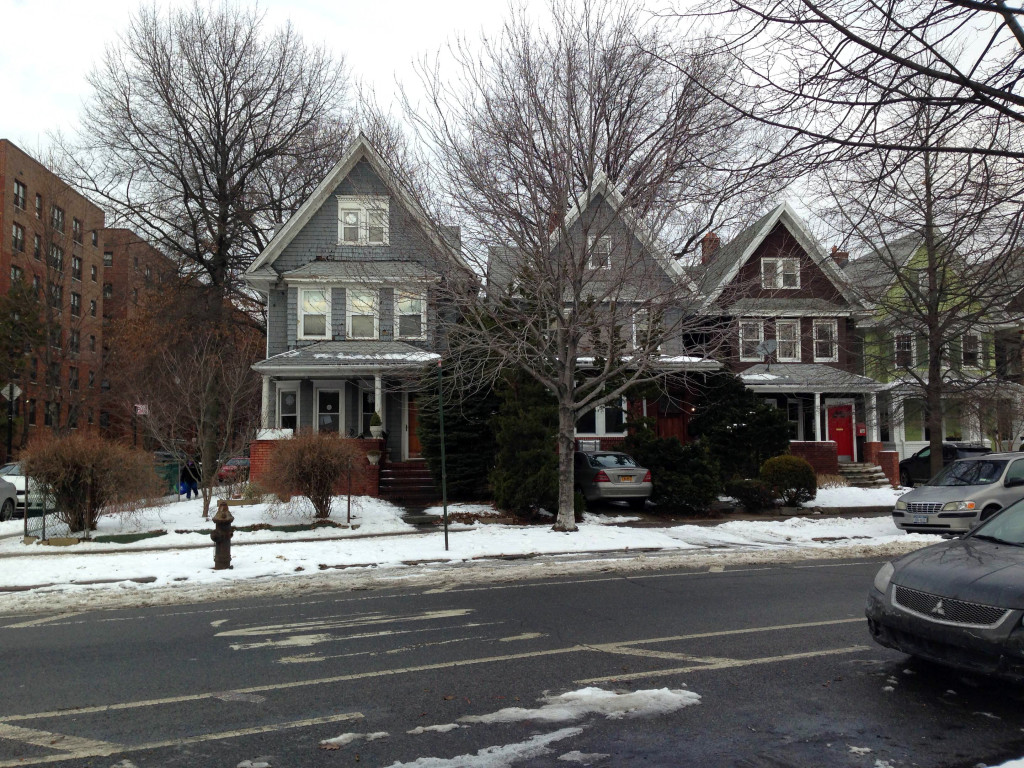 When you arrive in Ditmas Park, it’s pretty easy to forget all of your worries–and the fact that you’re in Brooklyn and can get to midtown Manhattan on a train in 30 minutes or less. Driveways, front yards and porches suddenly feel wonderful and out of place at the same time.

Since moving to the neighborhood about four weeks ago, I’ve basked in the glory of streets lined with Victorian houses, the sweet smells of baked goods and the hustle, bustle and charm of residents, old and new. 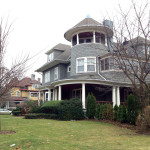 A mansion on Albemarle Road. 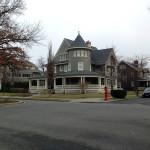 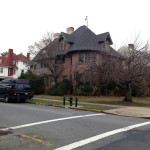 A corner property in all its Victorian glory on Albemarle Road. 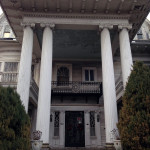 Pillars are common features of Ditmas Park’s historic homes, such as this one. 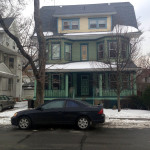 A beauty on Marlborough Road. 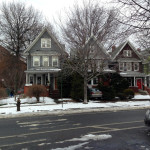 Albemarle is not the only lovely street–Dorchester Road is also lined with beautiful homes. Photo: Peggy Truong 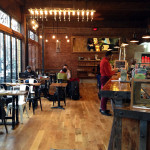 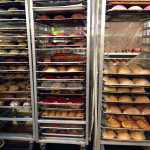 La Nueva Union Bakery on Cortelyou on a recent Monday morning, when Mexican pastries were still cooling off on trays. 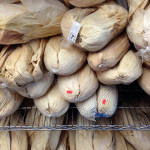 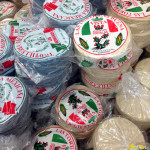 Or a taco fiesta. 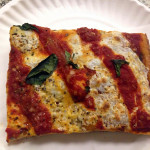 Presenting, the grandma slice at San Remo Pizzeria on Cortelyou. 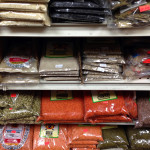 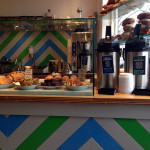 Bread pudding, brownies and other goodies at Nine Chains Bakery on Church Avenue. 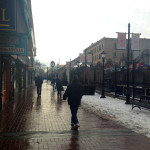 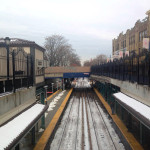 
Since I’m a comparative newbie, I spoke to Ditmas Park Corner’s Nora Whelan and Max Habib, owner of Qathra and Milk & Honey, for guidance about the neighborhood, and their favorite hangs and hidden gems. It’s tempting to tag the neighborhood as a suburb, thanks to the bevy of freestanding homes and tree-lined streets. Even the air feels a bit cleaner. “I don’t consider ‘suburb’ a dirty word,” says Whelan, who’s lived in the area for four years. “Ditmas Park is like everything you ever wanted in a perfect suburbia in terms of green space, breathtaking Victorian houses, and neighbors who will lend you a cup of sugar, but with the wealth of creative talent, amazing food and amenities, and easy transportation that the rest of crazy, urban NYC is proud to share.”

The neighborhood has changed quite a bit as of late, but for the better, say Habib, who opened Qathra on Cortelyou nearly four years ago. “It’s flipped 360 degrees in a good way,” he says, adding that the busy street, now packed with popular restaurants and bars, used to be on the rough side.  “[Ditmas Park] is a great neighborhood to hang out in,” he says. “Awesome neighborhood. Everyone’s friendly and they love supporting the local businesses. I wish I could open more places in the neighborhood.”

Got a few hours to explore? Bring a camera, a friend and your appetite.

Where to eat: In less than a month, I’ve managed to pack the following into my belly: the veggie momos from Café Tibet (BYOB with a wide selection of alcoholic beverages from the bodega next door), the smoked pollack cake from The Farm on Adderley and the delightful pitas and hummus from Mimi’s Hummus. I also tried Afghani cuisine for the first time at Bahar Masala, where I feasted on lamp chops and chicken karahi. Halal Chinese options are also available at this Coney Island Avenue joint, as are family combos (meat galore) and a refreshing mango lassi.

Max’s pick: The Farm on Adderley (“I used to go there a lot when I first opened Qathra. [The owner] is a good friend of mine.”) 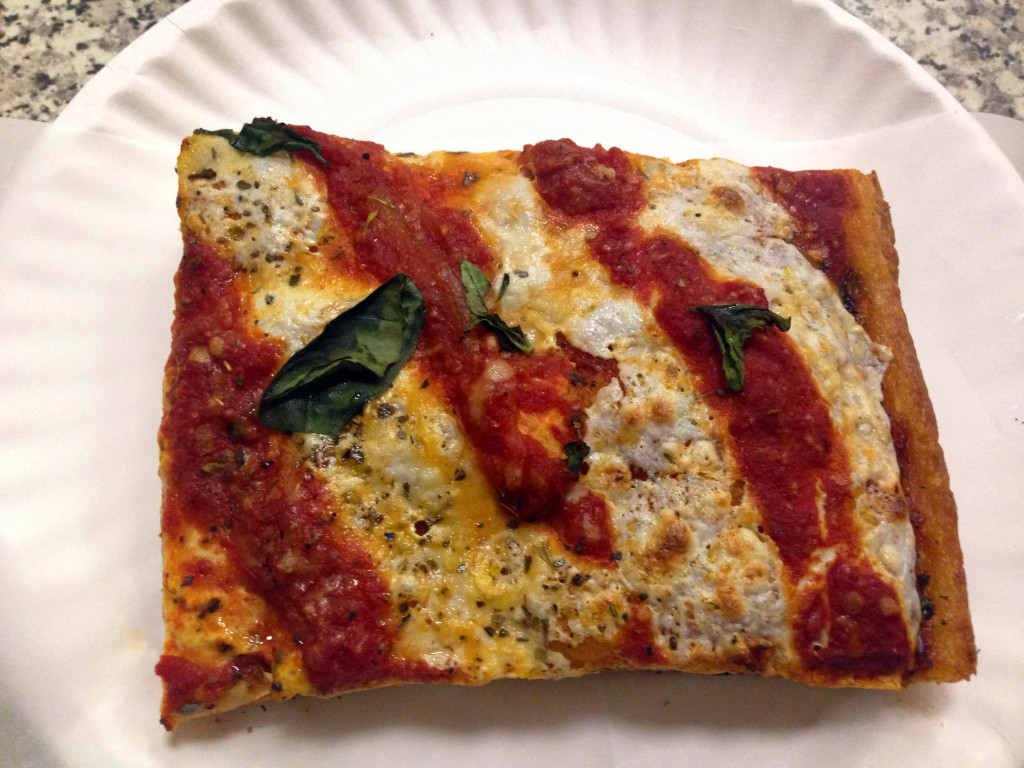 If you’re in the mood for a slice, head to San Remo or Lo Duca. Nora swears by Wheated (featuring sourdough pies named after surrounding neighborhoods like Sunset Park and Brighton Beach), Lea (if sourdough isn’t your pizza jam) and Di Fara (“even if it’s a little far out to be considered ‘Ditmas Park’”).

Bonus: If you have a sweet tooth to take care of, pick up a treat (like the melt-in-your-mouth mint chocolate grasshopper cookies) from Nine Chains, the neighborhood’s newest bakery. The cozy shop, operated by the same folks behind The Farm, is about all things local and sustainable. Fresh sandwiches, soups and oatmeal (go for the bacon with soft egg, jalapeno and squash) are also on the menu.

Where to drink: I quickly trashed the idea of having a sober January thanks to the friendly faces at Sycamore Bar (which doubles as a flower shop by day) and the double happy hour options (5 to 6pm and 10 to 11pm daily) at Ox Cart.

Nora’s picks: Bar Chord (for the live music and jukebox), 773 Lounge (for board game nights on Sundays), Shenanigans Pub (“because there’s never a line for a drink” and “it’s dirt cheap”). 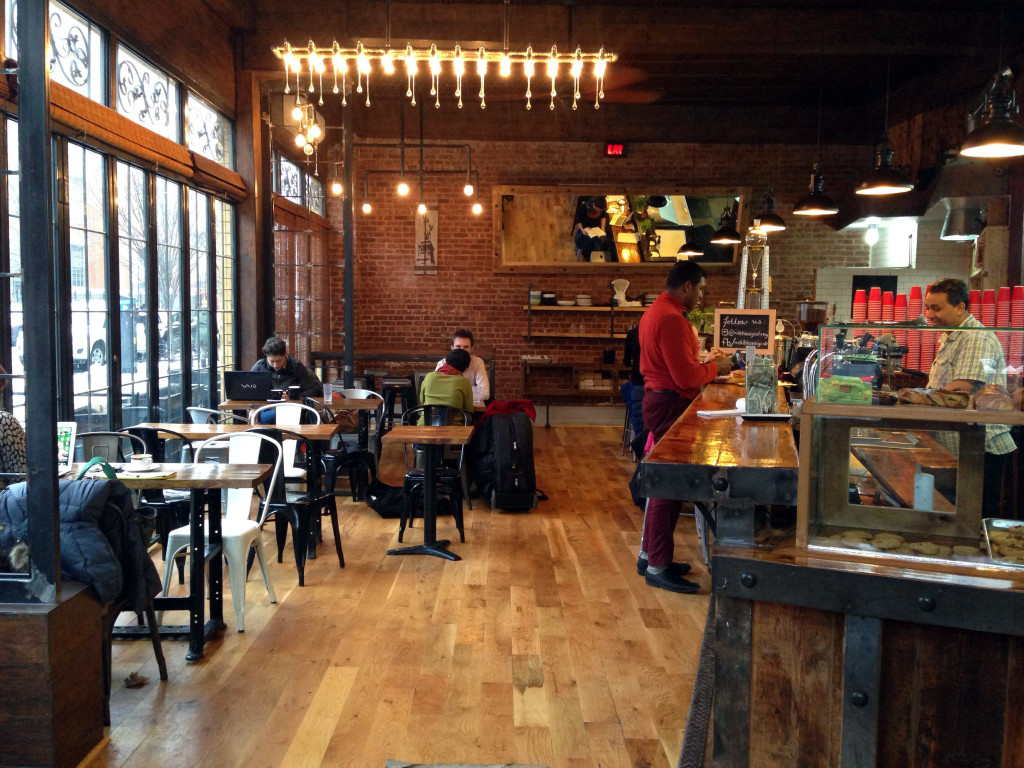 Where to get caffeinated: Milk & Honey serves both coffee and a mean Egyptian poached egg (served on sourdough bread with avocado spread, baby arugula, tomato and dukkah, a nut and spice blend), and for this reason,  and many more like breakfast tacos, flatbreads, salads and a soda fountain, it stands out as Ditmas Park’s go-to coffee shop. “I never expected Milk & Honey to do so well,” Habib tells us. “It’s almost on the same level as Qathra.” The café also has a living wall of herbs, many of which make it onto the menu–it’s one of the first things you notice when you walk in, a very welcoming and warm feature that feels green and fresh and alive.

When he’s not on daddy duty to his four-month old twins, Habib spends his time coming up with new menu items. If you pop by on a future Sunday, you might find yourself in the presence of homemade donuts–recent flavors have included bacon glaze and sea salt caramel. 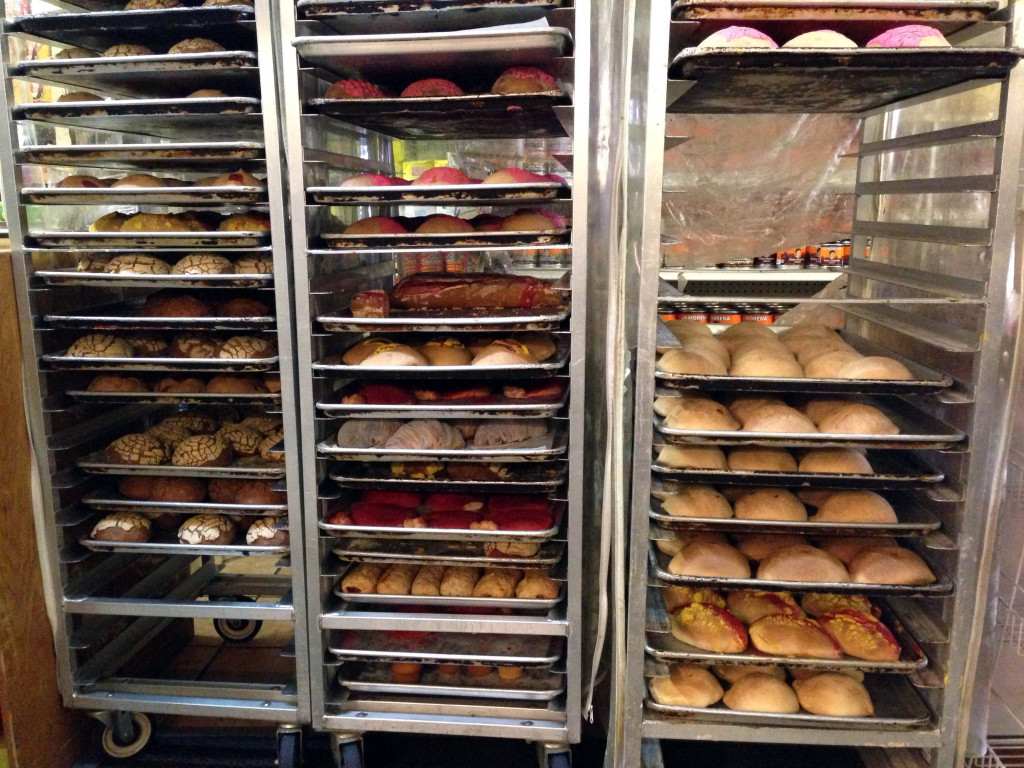 La Nueva Union Bakery on Cortelyou on a recent Monday morning, when Mexican pastries were still cooling off on trays. Photo: Peggy Truong

Don’t miss: Once you’re all finished with eating your way through the neighborhood, pick up a few delicious Ditmas Park souvenirs, courtesy of the diverse number of grocery stores. Bhutta Grocery and Halal Meat on Coney Island Avenue has a solid assortment of rice, noodles, spices, lentils and seeds, while Los Jazmines Grocery (formerly Karina) on Newkirk Avenue carries all the cornhusks you’ll need for a raging tamale party. (Stock up on Tapatio hot sauce while you’re there, too).

Save your remaining bills for some tasty pastries (or an entire cake) at La Nueva Union Bakery on Cortelyou and bagels from Catskill or John’s Bakery & Pastry Shop. If you’re in Ditmas Park on a Sunday, hit up the Cortelyou Greenmarket (between Argyle and Rugby) for local goodies. 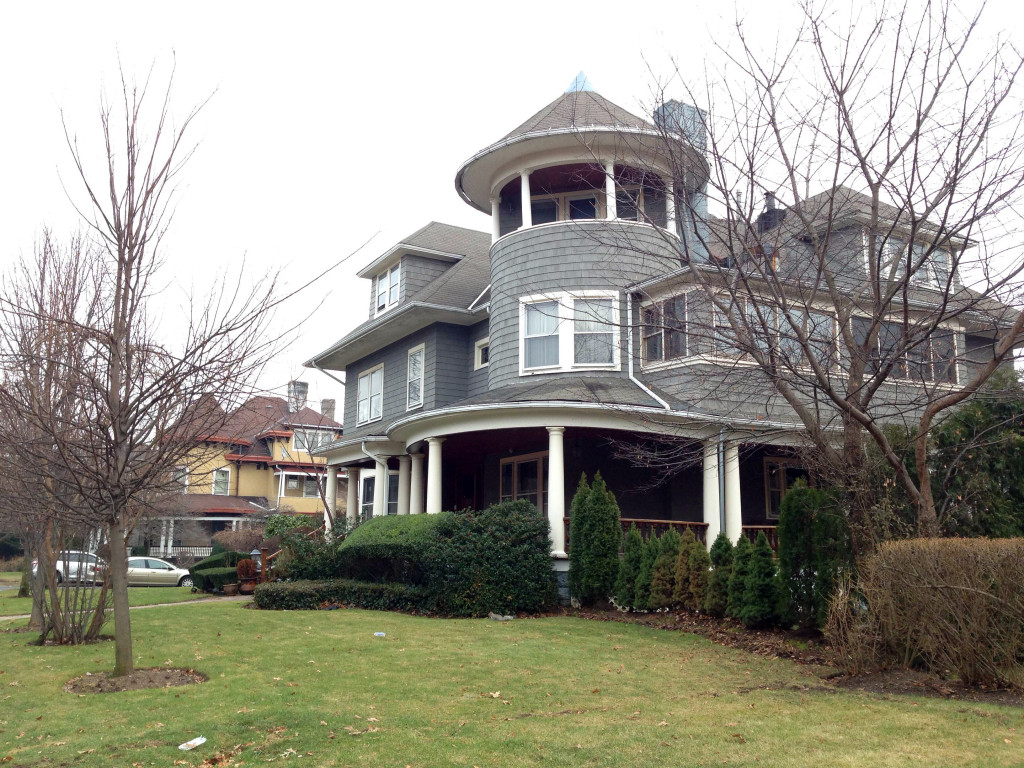 Care for a stroll? If you start your Ditmas Park visit in the north part of the neighborhood, get off the Church Ave. stop on the B, Q and make your way west along Church Avenue to Stratford Road. Make two lefts to find yourself on arguably the most pristine street, Albemarle Road. Take your sweet time gawking at these Victorian beauties (spend extra time on 1305 Albermarle Road and 1510 Albermarle Road). Take your pick between Marlborough, Rugby, Argyle or Westminster Roads as you head south toward Beverly Road, and admire even more noteworthy architecture. Or, try the walk that Nora shared with us.

Keep heading south to either Cortelyou (to take care of your hunger) or Newkirk (to quench your thirst) before heading home on the subway.

Max’s favorite street: Albemarle Road (“After a tough day, it’s nice to go somewhere with no sound. There’s so much green. It’s magical.”)

How to get there: The B and Q trains run through the heart of Ditmas Park, with local stops at Church Avenue, Beverly Road, Cortelyou Road and Newkirk Plaza. The B runs express from Church to Newkirk. (If you’re visiting on a weekend, only the Q will take you there).