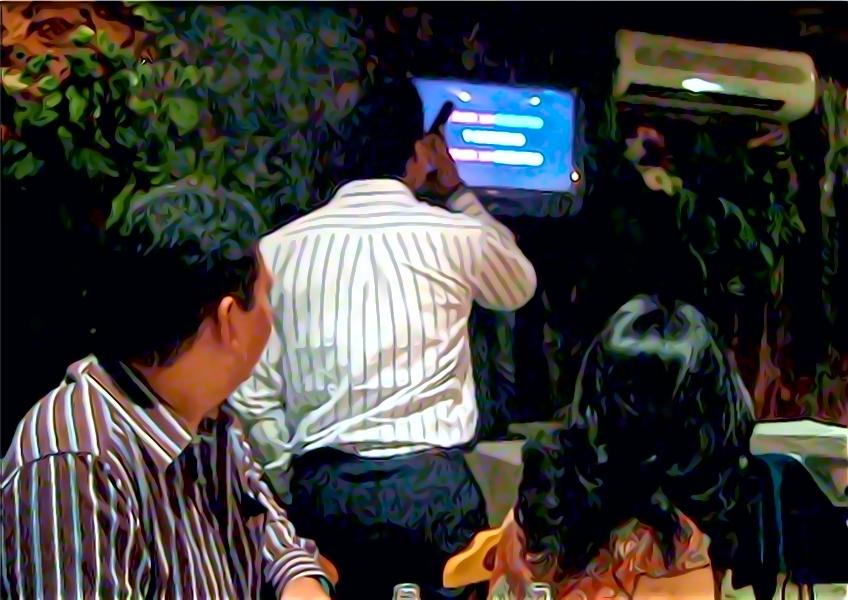 As I veer closer to my 40th birthday, which is coming up in a couple of months, I’ve been reviewing the thing that I want to cross off my bucket list: visiting the U.K., publishing a music book, eating at Peter Lugers, and walking the Highline. What I’m not eager to do–and yet feel curious to try–is singing at a karaoke bar. It might sound strange coming from someone who’s written about popular music for most his life and yet has never taken a stab at singing except in the privacy of his own bathroom. But if I ever did manage to muster up enough courage to actually do it (either under the influence of alcohol or the  threat of blackmail), the following are the songs that I would try to sing.

These aren’t your typical karaoke tracks–I deliberately avoided the usual suspects like Journey, Foreigner, Bon Jovi, Styx, Huey Lewis, and Queen (even though I like most of those acts)–but they still have a sing-ability factor that I might handle. You’ll also notice that most of these songs are from the ’80s, which when I started to get into music, so there’s a nostalgia factor here, too.

So here, in no particular order, is my list of 13 songs. And please don’t cringe.

1. Toto
“Africa” (1983)
Okay, this one’s no big surprise–Toto’s music is guaranteed to be on any karaokes playlist. But there’s something about the L.A. band’s first and only number one song that still resonates 30 years later–whether it’s the scintillating percussive groove, Steve Lukather’s piercing guitar, or the addictive chorus. On a side note, it was hilariously featured in a scene from Scrubs.

2.The Beatles
“Real Love” (1995)
Sing a Beatles song at a karaoke bar? Of course you would. But this particular track, “Real Love,” may not be the most recognizable of all of the classic tunes from the  canon. Technically, it’s not even a Beatles song, but a track John Lennon recorded as a demo on a cassette in 1979; the surviving Beatles took Lennon’s vocals and piano and reworked it for the Anthology TV series in 1995.

3. The Tubes
“She’s a Beauty” (1983)
Every time I listen to this great rocker, I always think about the summer of ’83–there were just so many great songs on the radio that year. A perfect blend of New Wave and arena rock, “She’s a Beauty” was the Tubes’ first huge hit. The video is pretty eye catching too, with the always charismatic Fee Waybill portraying a carnival barker who entices a kid to “ride the beauty.”

4. Joe Jackson
“Steppin’ Out” (1982)
If any song could conjure up a typical night on the town in the Big Apple, with images of people decked out in evening attire, taxi cabs, brightly-lit theater marquees, and piano bars, this Joe Jackson tune is the gold standard. A charming song with a very New York sensibility, “Steppin’ Out” is a stylistic departure for Jackson, who was known more as a New Wave artist.

5. Paul McCartney
“No More Lonely Nights” (1984)
Continuing on with the Beatles theme is this top 10 hit from Sir Paul, from the otherwise forgettable movie, Give My Regards to Broad Street. It’s truly one of Macca’s wonderful ballads and features a soaring guitar solo by Pink Floyd’s David Gilmour.

6. Don Henley
“The Boys of Summer” (1984)
There’s a romantic, bittersweet and jaded tone to this track that has struck a chord for me since I first heard it back in 1984 at age 10. Accompanied by a stark yet elegant black and white video, “The Boys of Summer” conveys the loss of innocence. By the way, the Ataris’ 2003 punk remake pales in comparison to the original.

7. The Police
“King of Pain” (1983)
The most popular Police song of all time is undoubtedly “Every Breath You Take.” But “King of Pain” to me, also off of the Synchronicity album, is the greatest song from for its wordplay, haunting tension, and that ringing Andy Summers guitar solo. The chorus still kicks after 30 years.

8. Nine Inch Nails
“Head Like a Hole” (1989)
Singing this song would be my moment to vent about bad bosses, the MTA, and ex-girlfriends. Joking aside, my earliest introduction to NIN still packs a ferocious punch 25 years later.

9. Morrissey
“Suedehead” (1988)
(runner-up: “Every Day Is Like Sunday”)
I would just want to do any Morrissey song from the period from 1988 to 1992, so that I can pretend to have fans toss me daffodils on stage and come up and hug me (with security pulling them away) as I’m still singing.

10. Kool and the Gang
“Tonight” (1984)
For a time, Kool and the Gang was the preeminent R&B band of the ’80s with hits like “Celebration” and “Ladies Night.” But “Tonight” stands out because it showed more of a rock-and-roll side from the Jersey City band. Besides, what other act could record a song about a teen trying to lose his virginity with so much funk and grit?

11. Peter Schilling
“Major Tom (Coming Home)” (1983)
Somewhat of a sequel to David Bowie’s “Space Oddity,” this 1983 track is a synthpop classic for its pulsating rhythm, Schilling’s chilly voice, and a melancholy storyline conveying the loneliness of space.

12. Kate Bush
“Running Up that Hill” (1985)
For any mere mortal, singing a Kate Bush song would be a Herculean task just because of her amazing vocal range. My absolute favorite song of hers is “Running Up That Hill” from the Hounds of Love album–it is emotional, sexy and powerful.

13. Duran Duran
“Is There Something I Should Know” (1983)
To me, this is the  quintessential Duran Duran song even though most folks are more likely to croon “Hungry Like the Wolf,” “Rio” or “Notorious.” Everything about this song is fantastic from the mindlessly catchy chorus, Nick Rhodes’ dazzling synths and Roger Taylor’s always excellent drumming. My favorite line in the song: “You’re about as easy as a nuclear war.”

Looking for a few karaoke spots to try out my suggestions? Here are a few in Brooklyn: