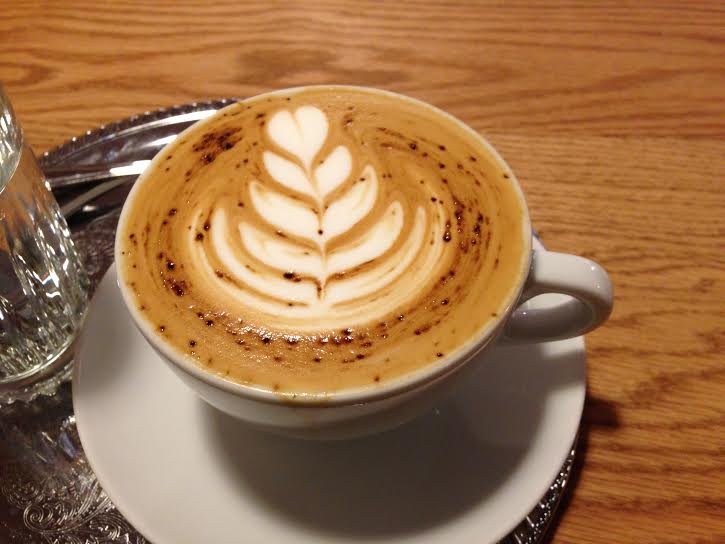 Our most anticipated coffee destination of 2014 has opened its doors and already attracted a flurry of attention, mostly due to the fact that they serve what is surely the most expensive non-alcoholic, coffee-based drink in Brooklyn, if not the whole country.

Budin, a Scandinavian-inspired coffee bar, debuted in Greenpoint two weeks ago, attracting widespread internet derision for daring to price their “lakkris latte” at a hefty $7. That deluge of derision was only dwarfed by the number of customers who lined up to try it. In just a few days Budin reported that they were running out of imported ingredients for the popular drink and upped the price to $10.

So what does a $10 latte look like? If your first question is whether it’s served on a sliver platter, the answer is yes.

To be fair, Budin’s other to-stay drinks come on the same platter, and it does make for a pretty presentation, along with a glass of water and a chocolate-covered Danish licorice. So why the two-digit price tag? Budin co-owner Elliot Rayman told the Daily News that it’s because “Each component is of a high caliber that is rarely seen in the states.” Namely, the Ethiopian beans sourced by Norwegian master microroaster Tim Wendelboe, mixed here with milk, anise syrup and raw licorice powder, the latter two ingredients imported from Denmark.

I reached out to expert coffee writer Oliver Strand to get his take on whether there’s any justification for java this expensive. Strand noted that every coffee on Budin’s opening list–not just the beans in the latte–are among the highest quality you can find anywhere in the world, and also imported from countries with currencies that dwarf our own. So yes, it’s an over-the-top price, but the truth is that Budin is probably making less of a profit on a $10 super-high-end latte than say, Starbucks does on a $5 mocha-frappa-whatever-the-hell-it-is, or any random bar in New York City does by charging $10 for a no-name vodka and soda.

“Nobody is going to go to the desert and bury a barrel full of money made from selling licorice lattes,” says Strand, who adds that “I think the pricing is correct–good milk, good coffee, good licorice. Whether or not you like how it tastes is up to you–you’ll decide if it’s worth it.”

Which brings us to tasting the damn thing. When I made it to Budin early one evening last week, the mania seemed to have died down a bit and I had no crowds to push through in order to sample an Alexander Hamilton’s worth of milky coffee.  First though, I have to say that Budin is surprisingly devoid of snobbery. I was certain that this would be a precious little place with condescending baristas and lots of signs telling you not to put your laptop anywhere near their beautiful reclaimed-wood tabletops. In truth, Budin is a spacious, airy cafe (with an outdoor space coming soon), very friendly baristas who were quite excited to make any drink, free wifi and plenty of room to work. In addition to the java, there’s also Danish rye bread from Tørst, Siggi’s Icelandic-style skyr yogurt, and, pending community board approval, beer and wine coming soon.

The on-site design shop features Scandinavian products with um, latte-sized price tags, like a handmade wooden bowtie for $245 and Icelandic birch hand soap for $33. I’ll be sticking to Duane Reade for my toiletry shopping, but back to that latte! I have to say: it’s special. It comes with a strong licorice scent that hits you immediately, but the flavor is more subtle than that, a sweet-but-not syrupy herbal note that I found quite pleasing, even though I’m not normally a huge licorice fan. It’s a warming, indulgent drink that’s also smooth and light and every ounce a perfect latte. Will it become my go-to morning brew? My bank account certainly hopes not, and the light, flavorful notes of Wendelboe’s beans are more apparent in a regular, milk-free cup here. But I also have to say that if you like lattes, it’s well worth a try.