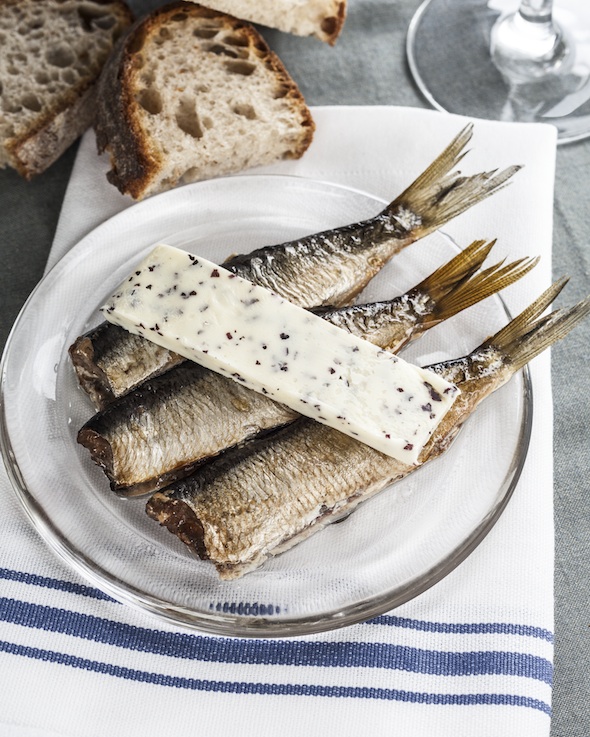 Since opening in Carroll Gardens in 2008, Buttermilk Channel has been one of Brooklyn’s most consistently acclaimed eateries, winning best new restaurant awards, a star review from the New York Times, national media attention, and even visits from Beyonce and Blue Ivy. For most local restaurateurs, success like that would be carte blanche to start building an eatery empire (see Frankies, No. 7), moving on up to Manhattan (like Mile End and Brooklyn Fare), or expanding into everything from 10-course tasting menus to frozen pizza (that’s you, Roberta’s). But Buttermilk owner Doug Crowell and chef Ryan Angulo have been content to run the borough’s best neighborhood restaurant, a homey, comfortable outpost where the menu rarely changes but everything is always excellent. With that in mind, the focused team took more than five years to debut their follow-up restaurant, the just-opened French Louie. 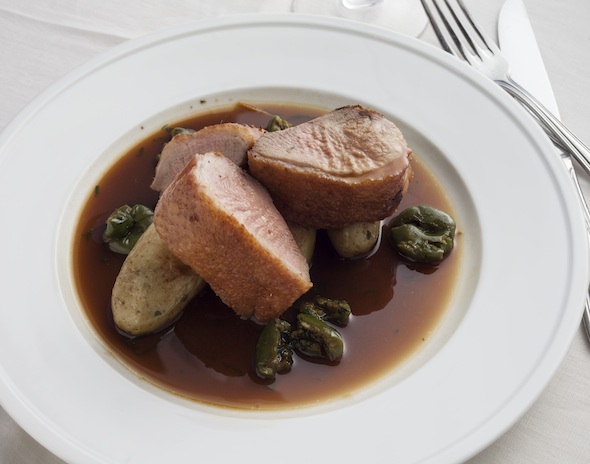 Set in the Atlantic Avenue space that was briefly home to Hopeland, French Louie is named for Louis Seymor, a 19th-century French-Canadian lumberjack who, as legend has it, ran away to the forests of the Adirondacks, periodically emerging from the woods to drink and paint the town red. This bit of folkloric flair points to the fact that the menu is “French-accented contemporary American fare,” or as one staff member explained it, “we wanted to open a French restaurant, but a Brooklyn-style French restaurant.”

Yes, that means there are snails on offer, but here they are are served over hearty house-cured bacon, delicate mushrooms and creamy grits–think “snails and grits.” Whereas your standard American French bistro is content to hide their escargot behind butter and garlic, at French Louie they’re cooked perfectly, hardly chewy at all, letting the earthy snail flavor come through–albeit amped up with a red wine reduction and magnificently fatty hunks of bacon. Elsewhere on the appetizer menu a foie gras and country ham terrine comes with sweet pear butter, salty anchovies are battered and fried for anchovy frites, and smoked sardines are covered in a seaweed-spiked butter.

The entrees offer a similar focus on classic culinary technique and innovative flavor pairings. A toothsome skin-on seared duck breast is smothered in castelvetrano olives, with duck fat fingerling potatoes and supremely savory duck jus. A whole Point Judith flounder, served  bone-in, is a challenge to navigate, but a pleasure once you manage to get a well-composed bite of flaky fish, roasted cauliflower and blood orange grenobloise. On the vegetable-focused side, heirloom bean stew is served in a hollowed-out kabocha squash with a kaffir lime pistou, while on the other end of the spectrum steak frites are available three ways: thin bavette, a hunk of 28-day dry-aged steak, and a lamb blade chop. 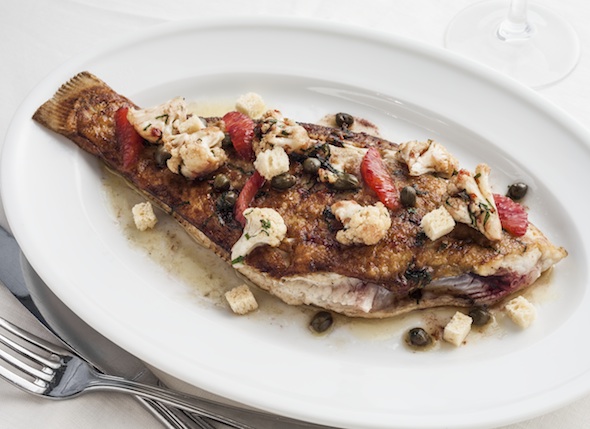 The laid-back atmosphere here is only slightly more upscale than at Buttermilk, with just a few fancy touches like modernist lamp fixtures and high-backed banquettes. (A garden space is set to open later this spring, along with a brunch menu.) Owner Doug Crowell was tending to the (very busy) house on a recent evening one week after opening, taking the time to smile and check in with every table. The hostess happily guided us to a perfect and affordable wine selection, while servers were excited to talk Francophobes through details of the sometimes difficult-to-decipher menu.

French Louie is not your new favorite neighborhood joint. In fact, it has less in common with Brooklyn’s French bistro boom than it does with the laidback-but-ultra-ambitious M. Wells Steakhouse. The upscale cuisine here is more date night than every night (and the prices match, running from $19 to $36 for entrees), but the food is also flavorful enough to match a very special occasion, and it comes with none of the frills or fuss of an old-New York French eatery. In short, French Louie exactly what it aims to be–a Brooklyn-style French restaurant.