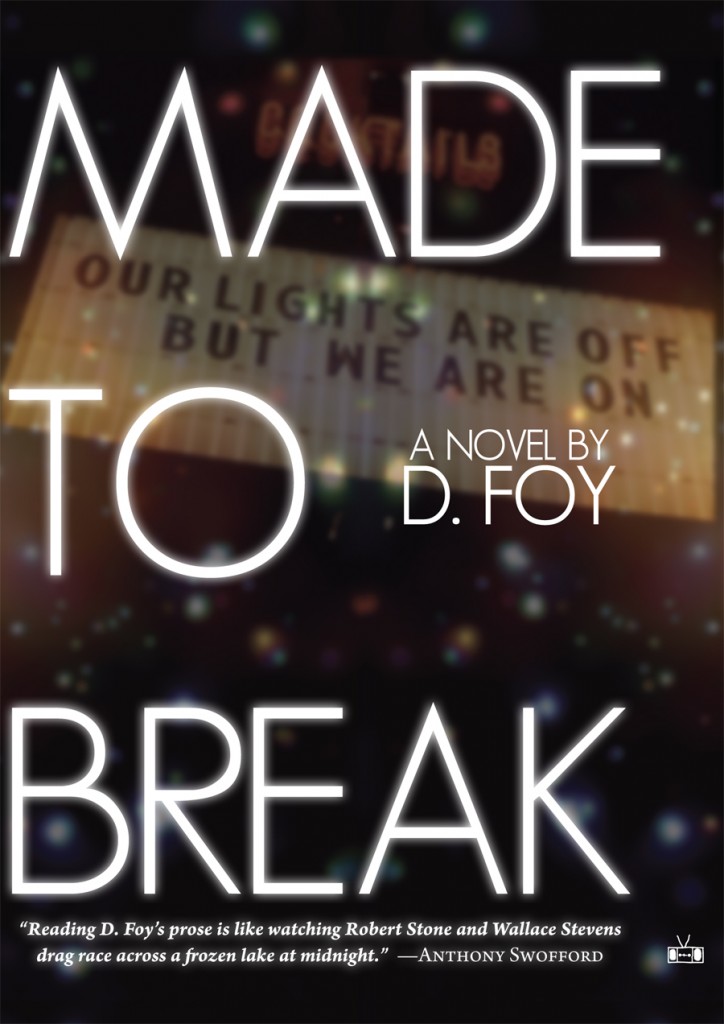 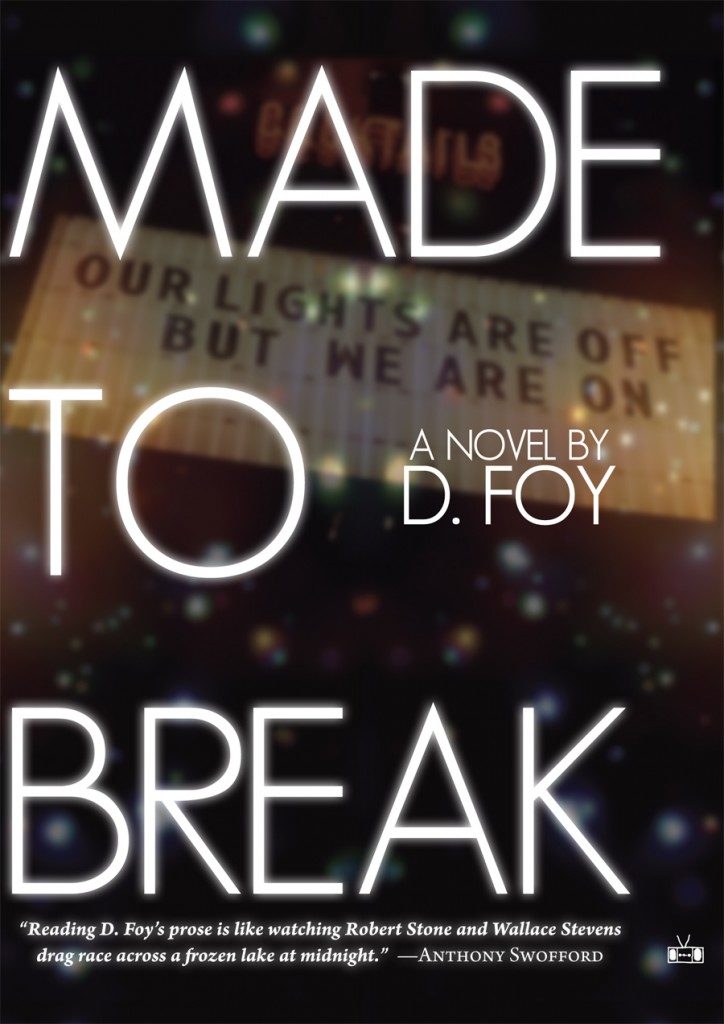 Made to Break by D.Foy, published by  Two Dollar Radio,  March 18

Made To Break is not an easy read, especially early on.  Take these snippets from first chapter.

“We’d nothing to do but get to the door, but the stairs slipped me up, and I collapsed, and lost my bottle too… The stars were dead. The night was rage. the was was sick with danger. Someone moaned and from the blue I understood: time is a leech… ”

I picked Made to Break up, asked it to dance and it broke eight of my toes before we found a rhythm. Thing is–it ended up being a beautiful rhythm. Still, half the time I put into reading it was spent in limbo. I found myself constantly picking this novel up and then putting it down again almost immediately. That is until I found that rhythm. Then I finished it in a night.

Here’s the set up: A group of friends in their thirties convene at a cabin at Lake Tahoe during a particularly devastating flood.  A car accident leaves one member of the group sick and dying, and the weather knocks out any  means of communication to the outside world.  Instead they are forced to look inward and backward, and that’s where things get interesting. Though it’s always the same narrator, the tone changes radically between the cabin scenes and the flashbacks which take place outside the world of the cabin and in the main characters’ respective pasts. It’s not until we learn to distinguish between those two narrative modes that we really become immersed in Foy’s world. Once I began to understand the method to Foy’s tempered madness I became like an enthusiastic child, finally being let in on the secrets of the older and wiser.

Foy could have won the reader early on with a more linear narrative or by placing some of the more digestible interactions earlier in the book.  Friends at a Warhol-esque bash playing truth or dare, sharing phallic descriptions, stories about pubescent coitus with a stuffed monkey, three brothers sleeping with the same woman, all of these plot elements could have been intriguing up front. Instead, they’re parsed out deliberately. We only come to understand these people we are already acquainted with once we read their backstories. Foy gives you the experience of how knowing a person can change your perception of them, within the confines of the novel.

The flashbacks inform the drama that takes place in the Lake Tahoe cabin. They explain the stunted, sometimes passive aggressive interactions between the characters. The narration in the cabin scenes is jumbled and often confusing compared to the taut and straightforward flashbacks–a reflection of the novel’s take on what it’s like to be in your 30s, fraught with anxiety and dissatisfaction.

Doom is always impending in Made To Break, although Foy never tells us so explicitly. For the most part, the doom in this story exists inside the characters themselves and maybe even inside the reader. It’s the music playing on the phonograph in the cabin, in the muddled drunken and drugged out dialogue between the characters. The haze of a drugged-out-for-too-long mind is communicated with perfect clarity in Made To Break.

Both the language and structure of this book challenge the reader in a way that just don’t see in first time novels.  It’s as if Dennis Cooper published Marbled Swarm,—a book that deliberately confuses the reader about what is and isn’t real–as his debut or if Bret Easton Ellis published Glamorama—a book that uses repetition of like words and phrases in a way that lulls you into near hypnosis–as his first.  Ultimately Made To Break is a psychological thriller in the purest sense and it’s one of the gutsiest debut novels you’re likely to come across.