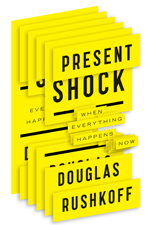 There must be something serious in the air at New York’s publishing houses. Over the past few weeks I’ve received some dark galleys on some especially heavy subjects.  If you’re looking for some light and crisp reads, like the spring air, you won’t find them here. These are four heavy books.

Present Shock by Douglas Rushkoff A few weeks ago we discussed a few books that explore how technology is changing the way we think and act. Had Present Shock been out at that point it would have been included, because it’s one of the most poignant rundowns on the subject to date. Present Shock refers to an elusive goal put forth by modern technology–the goal of “now,” and in this book Rushkoff exquisitely describes the anxiety caused by the dissonance between our digital selves and our analog bodies. He has been a crucial voice discussing our relationship with technology for quite awhile now, including in a series of specials on PBS’s Frontline, notably Digital Nation, which explores the way digital experiences can easily replace or perfectly mimic actual experiences. In Present Shock, Rushkoff tells the story of the phenomenon through different types of media, beginning with Beavis and Butthead, a show that actually featured characters watching TV, and extends the analysis to current shows like Family Guy, where constant cutaways diffuse the presence of any kind of “now.” In the end he argues that the more we yearn for the present, the more it eludes us. 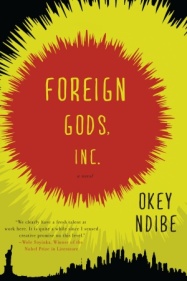 Foreign Gods Inc. by Okey Ndibe This book came out a little before the official start of spring, but it’s easily one of the best literary fiction offerings of 2014 so far. Despite his degree from a major American university Ike, the main character, struggles with the Nigerian accent that keeps him from climbing the American corporate ladder.  As a result, he’s relegated to driving a cab in New York. Ike feels inferior as a man. A failed marriage that ends with his wife running off with his savings doesn’t help matters and he turns to gambling, which only compounds his debts. In the midst of this, Ike learns of the “God Trade” wherein posh art dealers sell African deity statues to the rich. The burgeoning trade inspires Ike to return to his home village in Nigeria and acquire a god statue to sell, where he quickly finds that the home he’s returned to isn’t quite the one he remembers. This novel is told with such precision, not a word is wasted, and it proves that great literary works needn’t be confusing or verbose.

Children of Paradise by Fred D’Aguiar A book of historical fiction can be tricky for a reader who’s especially versed in those fictionalized occurrences. Often the trick to overcoming this is in writing that illustrates the inner, and interactive world of the characters so well that the history surrounding the story becomes almost secondary–the better the characterization the more malleable history becomes. An excellent example is Neil Gordon’s The Company You Keep, which fictionalizes aspects of The Weather Underground’s direct action, using it mainly as the back story for a fully imagined character. Children of Paradise author Fred D’Aguiar was born in London, but raised in Guyana, the site of the Jonestown Massacre.  The novel takes placed on a compound modeled after Jonestown, though this isn’t said explicitly. It tells the story of a young girl named Trina who is attacked by a pet gorilla kept on the compound. Just when the community accepts that Trina has died in the attack the group’s charismatic leader brings her back to life in a theatrical performance that only tightens his stronghold on the community.  Trina’s mother becomes a skeptic of the cult and their leader after rejecting his sexual advances and eventually hatches a plot to escape. D’Aguiar succeeds not only in portraying the nature and pull of a religious cult, but of mental illness and humanity’s innate desire for community and faith. 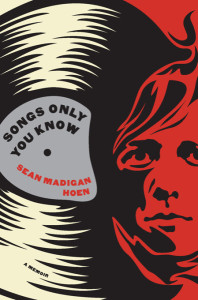 Songs Only You Know by Sean Madigan Hoen Just as a reader who is also a history buff may not love historical fiction, someone with a deep connection to a specific music scene might tend toward critical when reading a memoir about that scene. Sean Madigan Hoen’s Songs Only You Know is about a young man finding healthy escape from family and social woes in Detroit’s hardcore punk world circa 1996.  Now, I’ve shouted my share of “Up The Punks!” so I’ve been critical of, and have sometimes altogether avoided punk coming-of-age tales. However, Songs Only You Know is about much more than punk rock. The world of constant futility and dread that was 1990’s Detroit is aptly portrayed in this book, as is the world of addiction. A young rebel in a punk band with a father living a secret life as a crack addict is not your run-of-the-mill addiction tale and it provides an especially compelling case for escape through music.