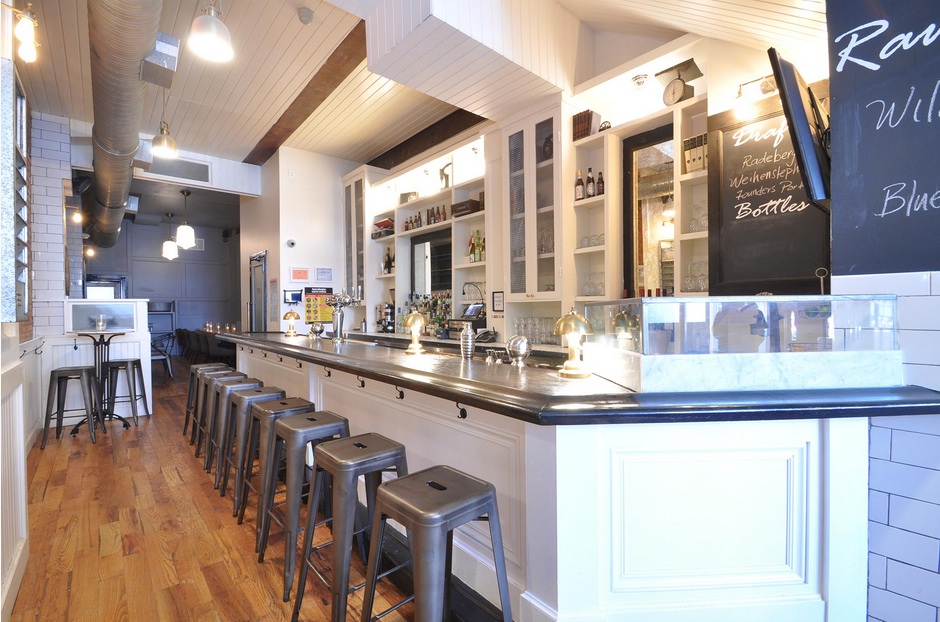 With a narrow, white subway tile-lined interior and a focus on oysters and cocktails, I didn’t expect Docklands, which debuted on Franklin Ave. in Crown Heights last week, to stand out much from, well, 100 or so other places that have opened in Brooklyn recently. Inside though, it quickly becomes apparent that Docklands is a labor of love designed to appeal to a diverse neighborhood.

This is the first restaurant from Kwhame Gittens, who is from Guyana, and his wife Juliet, who grew up just a few blocks away in Prospect Heights. The name comes from London’s Docklands area, a former shipping hub that was at one time the world’s largest port–and where Kwhame, a financier, spent time working–and the focus here is on the fruits of the sea. Friendly bartenders were handing out gratis East Coast oysters in a tangy housemade mignonette during opening week; moving forward they’ll be $1 during happy hour. Elsewhere, seafood-heavy small plates range from Caribbean-influenced (spicy prawns are served over crispy yellow plantains) to comfort food (lobster comes encased in macaroni and cheese balls).

The rest of the menu includes simple bar food standbys–sweet and spicy chicken wings are a sticky, delicious mess–along with standard New American fare like shisito peppers which, despite having gone from obscure to ubiquitous in recent years, manage to stand out here in a straightforward presentation of tomato, garlic, olive oil and warm marinated olives. There are also seasonal soups and salads and a limited entree menu featuring wintry items like Arctic char on a bed of creamy polenta, with a more extensive large plates lineup coming soon (Gittens promises pork belly and a burger). The cocktail list is creative and local while managing not to be too precious, with a mix of six classic cocktails and six house creations, including an excellent take on the Moscow Mule with fig vodka mixed into house-brewed ginger beer.

Docklands plans to add brunch soon, and this week they’ll debut live music, with the neighborhood-based People vs. Larsen beginning a Wednesday-night residency on April 2. A second local musician, Bill Todd, will soon be playing following brunch on Sundays.