BOYTOY’s self-titled EP on PaperCup Music will be out on May 13. They will be performing at Niagara, 112 Avenue A, New York, every Thursday April 3, 10, 17 and 24, 10pm, free. For information, visit their Facebook page.

The band BOYTOY was born out of a double breakup. A few years ago guitarists Saara Untracht-Oakner and Glenn Van Dyke, from You Can Be a Wesley and Beast Make Bomb, respectively, were both looking for new projects after their bands split up. The group had toured together, so Saara and Glenn already knew each other.

Being in New York and single and seeing all these beautiful people, and it’s warm out and everybody’s kind of like on the prowl. Everything is kind of on the surface level when you meet someone, it’s a physical attraction, you like how they dress, you think they’re cool, and you want them to think you’re cool.

“Glenn and I got along really well,” says Saara. “And then when our bands broke up, I was in New York visiting [Glenn from Boston]. It was like 2am or something: ‘Let’s go play music.’ We rented a practice space and she and I jammed. We were like, ‘Well, this is kind of cool.’ We worked well together and liked each other’s ideas. So I moved to New York, and then we were like, ‘Let’s start a band.’”

With drummer Matthew Gregory, BOYTOY is set to make a proper arrival with the imminent release of their debut self-titled EP. (The band’s previous drummer, Dylan Ramsey, helped record the album before he decided to relocate to Washington, D.C.). Their brand of noisy yet melodic rock recalls great ’90s bands like Throwing Muses and the Breeders. Starting Thursday, the trio will begin a month-long residency at Niagara in the East Village.

The guitar interplay between Saara and Glenn is at the core of BOYTOY’s sounds and the musical chemistry between the two was immediate from the start. “The first night,” recalls Saara, “it was, ‘You serve, I serve.’ ‘You skate and I skate.’ ‘You like zombies, I like zombies.’ ‘You were a soccer goalie?’ We had all of the same interests. I liked her guitar playing and she liked my songwriting. It just synched up on multiple levels.” 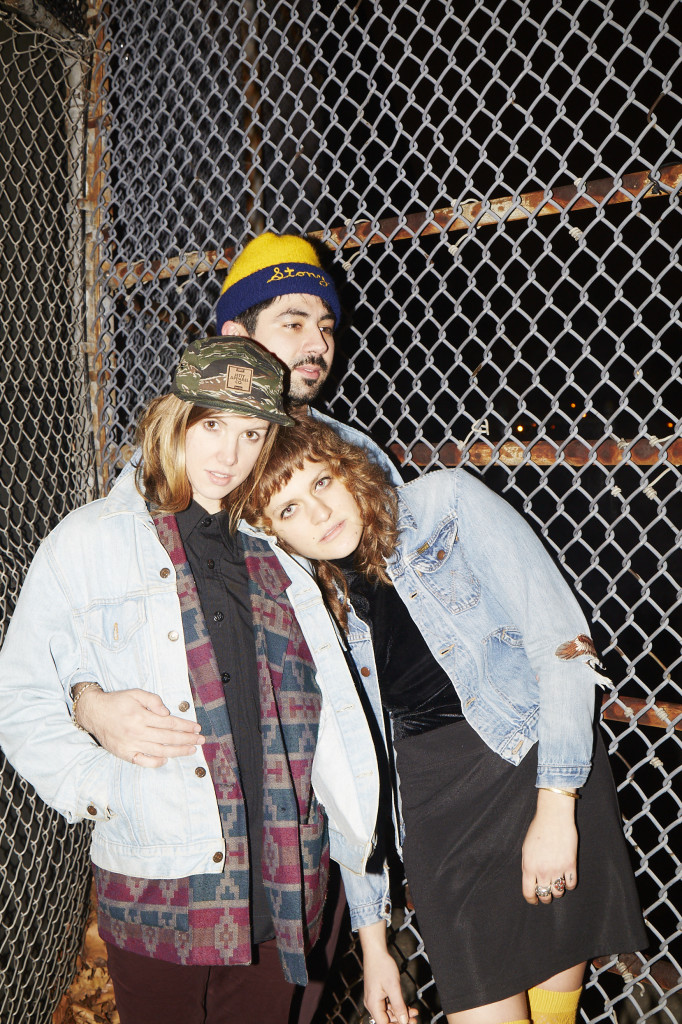 A couple of the tracks draw from Saara’s own personal experience and observations, beginning with “Shallow Town.” “I was kind of casually seeing someone,” she says of the song’s origins, “and being in New York and single and seeing all these beautiful people, and it’s warm out and everybody’s kind of like on the prowl. Everything is kind of on the surface level when you meet someone, it’s a physical attraction, you like how they dress, you think they’re cool, and you want them to think you’re cool. It’s all kind of shallow.”

The back story for another song, “Visits,”  is from the period when Saara was moving from Boston to New York. “I was seeing someone in a long distance relationship where we only hung out a couple of times and talked basically for two months before really hanging out again. I came down to New York for a week to cat sit at my brother and his girlfriend’s apartment. This guy came down and it was the first time that we ever really hung out together despite having this long distance phone relationship.” The song’s video also features former Saturday Night Live cast member Horatio Sanz. “He’s been a friend of mine for 10 years,” says Saara. “He was in town and I had asked if he wanted to do it. He said yes. It worked out really well. He was awesome for doing it and awesome in the video.”

Despite a majority of the BOYTOY EP’s spirited tracks, there are a few mid-tempo songs with the unusually-titled “Sharks in the Sun” closing the record. If that song sounds melancholy, it’s because it goes back to the time after Saara’s old group You Can Be a Wesley disbanded. “We had been together for six years and it all kind of fell apart. Basically that song is just about the band breaking up. It was really a sad time and kind of a lost feeling. It’s a relationship when you break up with anyone, it’s sad, you kind of got to figure it out.”

But that was then and this is now and BOYTOY is currently working on material for a full-length album. They recently performed several shows at South by Southwest and have their eyes on doing more dates beyond the confines of their home base. “We played Boston a lot because of my ties there,” says Saara. “It’s kind of nice having two cities that feel like home. We’ve done Connecticut, Philly–basically in the Northeast But we’re planning on making it out to the West Coast this summer after the record comes out.”