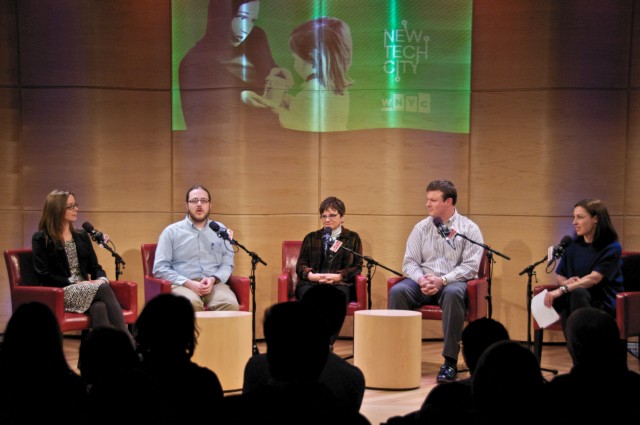 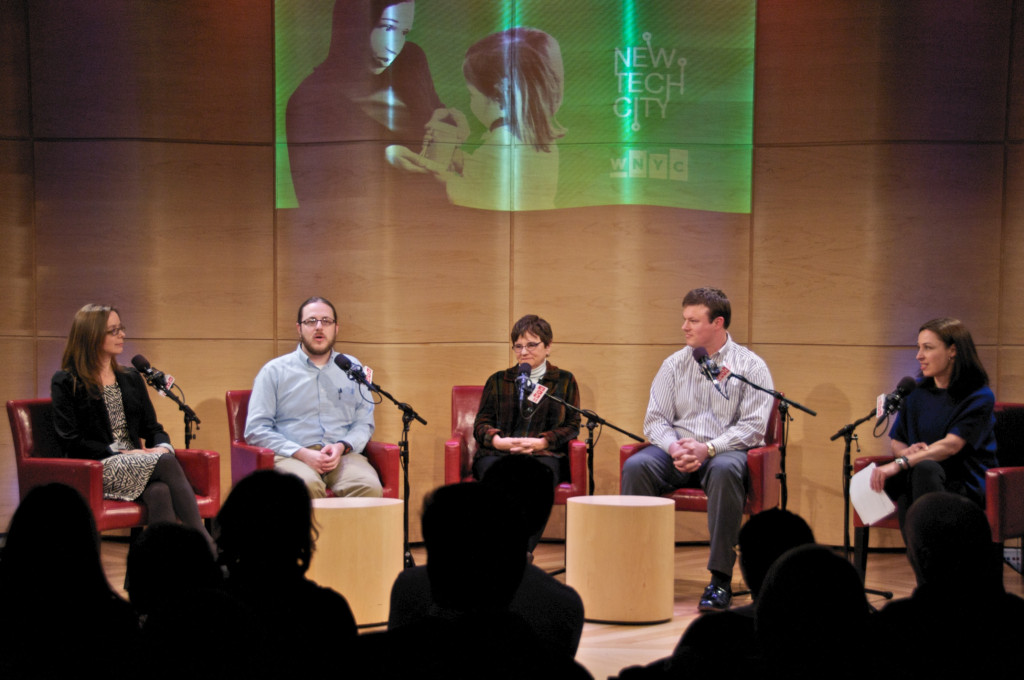 Figuring out how much time your child should spend in front of a screen is a never-ending question for parents. Also up for debate: how old they should be before you put an iPad in their hands, whether a tablet or TV is better, and if any game, app or video can really be called educational. These were some of the questions on the minds of parents and teachers who filled WNYC’s Greene Space last Wednesday to hear the panel, “Parenting in the Digital Age.”

Moderator Manoush Zomorodi, the engaging host of the WNYC show and podcast, New Tech City, and a mom of two young children, assembled four guests spanning a range of perspectives on how much technology benefits, or harms, our kids: Matt Smith, director of Camp Longacre in Pennsylvania, where adolescents can play with their gadgets and handhelds all summer long; psychologist Dr. Susan Linn, co-founder and director of The Campaign for a Commercial-Free Childhood, the group that pressured Disney to drop Baby Einstein’s educational claims, resulting in refunds for every parent who bought their products; MinecraftEdu co-founder Joel Levin, a parent who created an educational version of the game with its developers, and teaches it in his second-grade classroom; and Wendy Kelly, a third grade teacher at Rudolf Steiner School, America’s first Waldorf school, where screens are not introduced into the classroom until the fourth grade, and parents are expected to maintain limited screen time at home, as Kelly did with her own three teenagers.

Zomorodi set the tone for the evening by reading a line from Danah Boyd’s new book, It’s Complicated: The Social Lives of Networked Teens, which is now on my reading list. “My frustration about how we approach young people is that we think that everything must be so much worse because of technology,” Boyd writes, crystallizing the starting point for most parents when it comes to their kids and today’s ever present screens.

We think this because we are raising a generation of digital natives in “real time,” relying more upon our guts than first-hand experience or years of research (though that is emerging). And everyone is doling out the technology differently.

In trying to establish the right approach to screen time, Zomorodi started with a panelist on the extreme end of the spectrum, Wendy Kelly. How hard was it, Zomorodi wondered, for the parents at her school to enforce a no-screen rule at home–and was zero tolerance really the answer?

Kelly admitted that there were “different levels of compliance” among the parents, and that it was hard to raise kids the Waldorf way. Her own son, she said, continuously asked for video games in high school and ultimately “rebelled” at 18, indulging in them when he left home. But six months later, he thanked his parents for teaching him to put technology in balance. (As someone who was weaned on MTV and “You Can’t Do That on Television,” this sounded unbelievably mature, even suspect.)

As a counterpoint, Zomorodi offered an example from her daily life around dinner time, when she hands the iPad to her four-year-old son for 15 minutes so she can make dinner. Was that really so bad? Joel Levin weighed in next. Considering he teaches Minecraft in school, and his own daughter began playing the game alongside him before the age of five, I think the entire room expected him to be even more liberal about his kids’ technology use, but surprisingly, he said he has a no-screen policy Mondays through Thursdays.

By this point, I felt like the only bad parent in the room. My husband and I let our kids, who are two and five, spend hours in front of screens. They don’t get this open spigot every day, but compared to these panelists, our approach to media is exceedingly liberal. (Or alarming, depending on your perspective.)

While the panel didn’t delve into the research out there, the recommendations for screen time are one to two hours a day for kids over the age of two–though many kids clock in close to 50 hours a week. One study, published this week in the Journal of the American Medical Association, shows that limiting screen time improves children’s behavior, sleep, and health (though it doesn’t spell out the exact limitation, and the desired results don’t appear until at least seven months). Another longer-term study found that the more time toddlers spent watching TV correlated with poor performance in school at the age of 10.

Moderation, clearly, is key, a fact everyone agreed upon last Wednesday. Even in our house, where there are multiple showtimes for Frozen each week, we make sure our kids spend plenty of time with the TV off and the iPads away. Though in light of the New Tech City talk, I’ve already started to re-think their media diet. I’m sure we’ll always be tinkering with the exact ingredients. We’ve already eliminated Jessie, one of those big kid, bratty Netflix shows that is so easy for a five-year-old to discover and access if you keep the app on a tablet. So we deleted it. 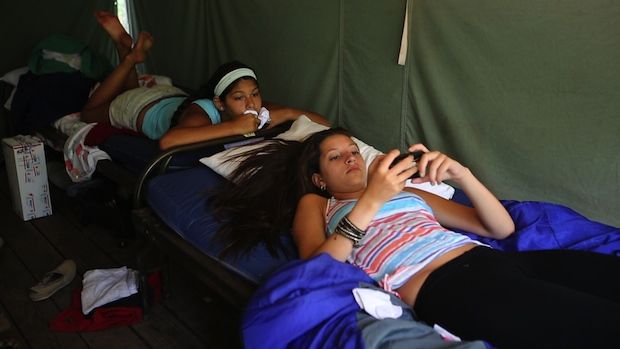 Campers were allowed to bring their gadgets to Longacre last year, an experiment in teaching teens self-discipline with their devices. It had the desired effect. Photo: Jennifer Hsu/WNYC

By a show of hands, most of the parents in the room had kids in the 3 to 12 range, so the topics and questions posed stayed primarily in the realm of toddlers to middle schoolers–there was no talk of sexting, and little of social media. But camp director Matt Smith gave us some insights into the lives of teens. While not a parent, he’s spent many summers with kids at the rural Pennsylvania camp his parents founded 40 years ago. Last summer, in an effort to continue to prepare their campers for long-term success, even as kids appear increasingly attached to their phones, the camp came up with an experiment. The counselors would take the devices away—as most camps do for the duration of summer—and then return them a week later and allow the kids to manage their own time on their gadgets for the rest of their stay. (Zomorodi produced a great video of the experience, which we watched at the beginning of the panel.)

When the kids got their devices back that first day, Smith admitted, it was scary. The kids discussed the experience together during one of the camp’s evening meetings, and Lewis became visibly choked up when recalling how some of the teens were frightened by the way their fellow campers disappeared in their own virtual worlds, unable to hang out with friends they had just bonded with. Gradually, though, the kids became more aware of the time they spent on their devices, and were better able to strike a balance between their screens and the world around them, which was the point of the experiment.

What concerns Smith most, it turns out, is not just adolescents who spend a lot of time on their smartphones. It’s overprotective parents who regularly text with their kids, and children who do not know what it’s like to be bored—a phenomenon he’s experienced first hand, and was reading about in Brainstorm: The Power and Purpose of the Teenage Brain. He admitted how strange it was, “to be selling unstructured play time as a business” in 2014. The fact that it’s an easy sell no doubt has to do with the fact that summer camp, and all of its unplugged freedom, resembles a childhood that parents can relate to. In many ways, our fear of all this rampant technology use is just the fear of the unknown every generation experiences, and tries to wish away by romanticizing “the way things were.”

Earlier in the evening, Dr. Linn nailed our generational divide on the head. While many of us may console ourselves with the fact that we watched tons of TV and played tons of video games, and we turned out OK, Linn made clear, “No parents in history have ever had to cope with the unprecedented convergence of a ubiquitous, alluring, habit-forming screen technology, and unfettered, unregulated advertisement…There’s a lot of money being spent trying to convince you and your children that a screen is no different than a book, and that more time [on it] is better than less time.”

No parents in history have ever deliberated so much about their kids’ well being, either. As my husband pointed out, we’re the most educated, oldest generation of parents to date, and are no strangers to media ourselves. We’ll all find a way to raise these technologically tethered kids. Though it would be a lot easier if we could just implant tracking devices in them.

Hear Manoush Zomorodi’s latest New Tech City podcast, Save the Children: 4 Parenting Strategies for the Digital Age,” which features some of the parents and speakers from last week.