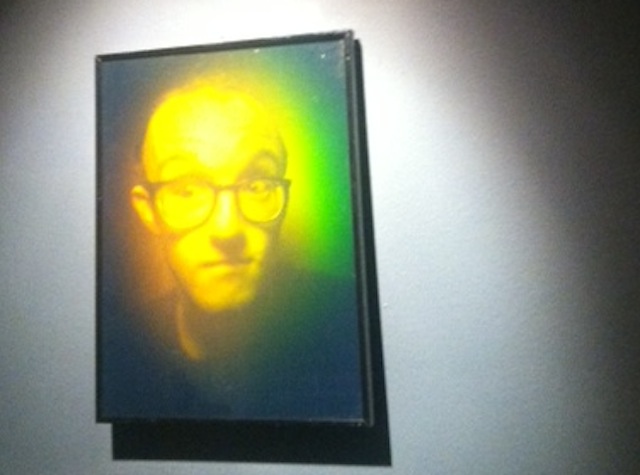 A hologram at the soon-to-close Holocenter in Long Island City. If it’s been a while since you’ve these 3-D artworks up close, they’re still truly outrageous. Photo: Meredith Craig de Pietro

Holograms are trending right now, with rumors of an Amy Winehouse hologram getting ready for a world tour. A quick recap of other recent holograms: The 2006 autumn/winter runway show of the late Alexander McQueen featured a ghostly Kate Moss shimmying on the runway. Then in 2008, Will.I.am made a holographic appearance on CNN during the presidential elections. The craze culminated in 2012, when Tupac Shakur’s posthumous hologram caused a stir at Coachella. But guess what? None of those were really holograms. They are all just examples of high tech 3-D projections, essentially fancy CGI.

Real-deal holograms are both more complicated and simpler. There are a few different ways to make holograms, but all require laser beams, interference and diffraction. Even without spending millions of dollars, the visual effects can be spectacular, as my son and I recently discovered when we visited the Holocenter in Long Island City. And you don’t have to understand the mathematics behind the science to feel the magic in the art. My 4-year-old son has gone to many museums and galleries, and usually finds the experiences enjoyable, but this particular show actually blew his mind.

The current, but soon-to-close exhibit, “Uncertain Worlds,” takes place on the main floor of the historic Clock Tower Building, a unique space complete with multiple levels and walk-in bank vaults. The building has decided not to renew its lease with the Holocenter, which will be leaving the space by April 13, so see it while you can.

In the lower level is the Holocenter archives, which reads like a group show of a mesmerizing variety of holograms. In case it’s been years since you’ve seen a real hologram, it works like this: Initially you are looking at a blank gray square but when you walk closer a 3-dimensional image reveals itself to you which changes depending on the angle you are standing. After looking at faces, planets, and a banana, my son had to scramble behind the picture to see if that object was really there or not. This optical illusion never got old. These “magical holograms” were mindbending to all of us, but my son was giddy over the realization that there was no easy explanation for them. His favorite was a dizzying grouping of people, whose faces changed as you stepped further and further off center. Even after we had looked and re-looked at the pieces on display, my son was reluctant to leave without examining them all at least one more time.

A true integration of math, science, and art, this hologram show is not to be missed. So hurry to see it before it closes on April 12th (or attend the farewell party on Friday April 11th.) The really unbelievable part is that this is one of the only organizations dedicated to holographic arts in the world. I only hope they can find a new location and keep promoting this art form before it becomes extinct.

Keep the magic of your day alive, with a shockingly reasonably priced meal at the LIC branch of Corner Bistro. This popular West Village haunt has an equally charming and comfortable outpost here with the same delicious burgers and pub fare. It’s the perfect place to duck in out of the spring rain and discuss art, mystery, and the musical merits of the 80’s television show “Jem and the Holograms.”