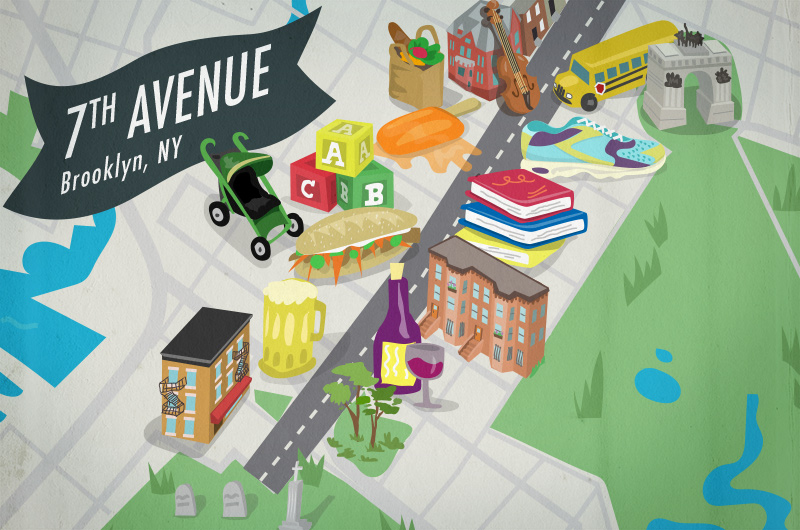 When you think of brownstone Brooklyn, those quintessential tree-lined blocks, beautiful stoops and the urban pastoral aesthetic, well, that’s prime Park Slope. Forget the punchlines about strollers, obsessive co-op shoppers, and hovering parents — that’s all secondary to the fact that this is one the most beautiful neighborhoods in the city, and, tucked next to Prospect Park, it offers plenty of open green space, sorely lacking in many other parts of Brooklyn.

Down the hill, to the west, 5th Avenue is the upstart shopping, dining and drinking district, while 7th Avenue, just two blocks from the park, is the traditional heart of the Slope. Stroll down the street keeping one eye on the architecture and the other on the many dining and shopping options, and make sure to take a side trip over to Prospect Park while you’re at it. Oh, and watch out for strollers. 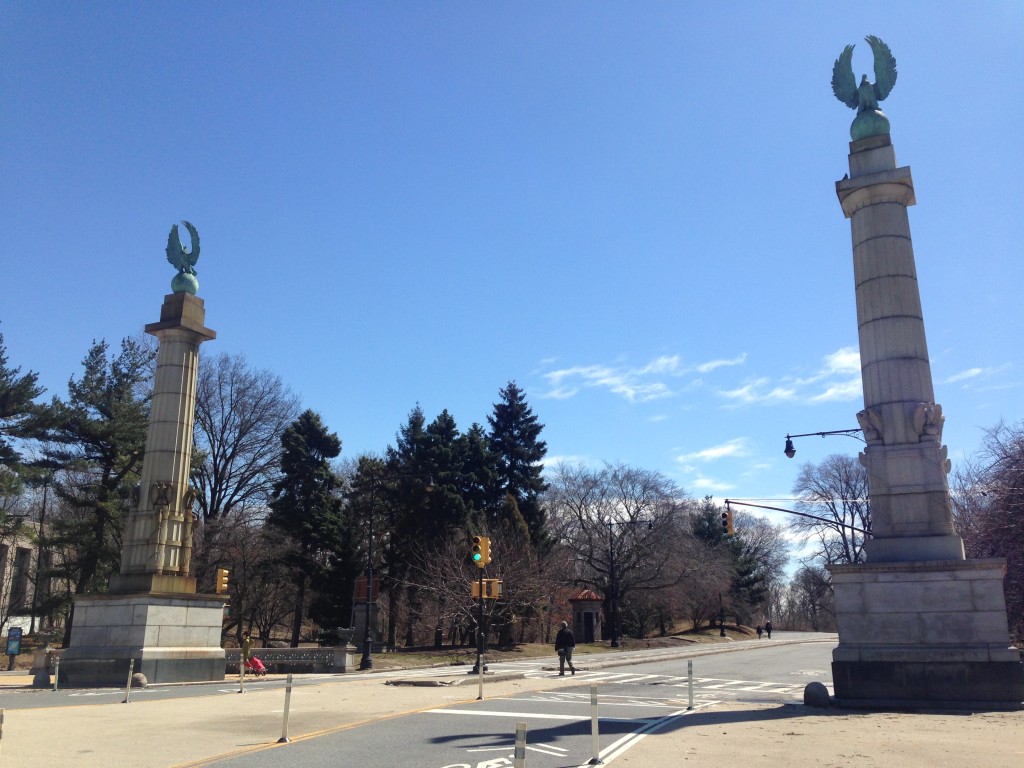 To get the true Park Slope experience, you may want to begin your stroll a couple of blocks away, at Grand Army Plaza. The plaza was originally designed in 1867 by the landscape architects behind Central Park and Prospect Park,  Frederick Law Olmstead and Calvert Vaux, as a grand entrance to Prospect Park. Now it’s a busy traffic circle, acting as a hub for Flatbush Avenue, Vanderbilt Avenue, Prospect Park West, Eastern Parkway, and Union Street. Make sure to pay attention to the traffic signals!

The arch in the middle of this circle is the Soldiers’ and Sailors’ Arch, a monument to the soldiers who defended the Union during the Civil War. John H. Duncan’s design was chosen from 36 entries in 1889, and President Grover Cleveland presided at its unveiling in 1892. 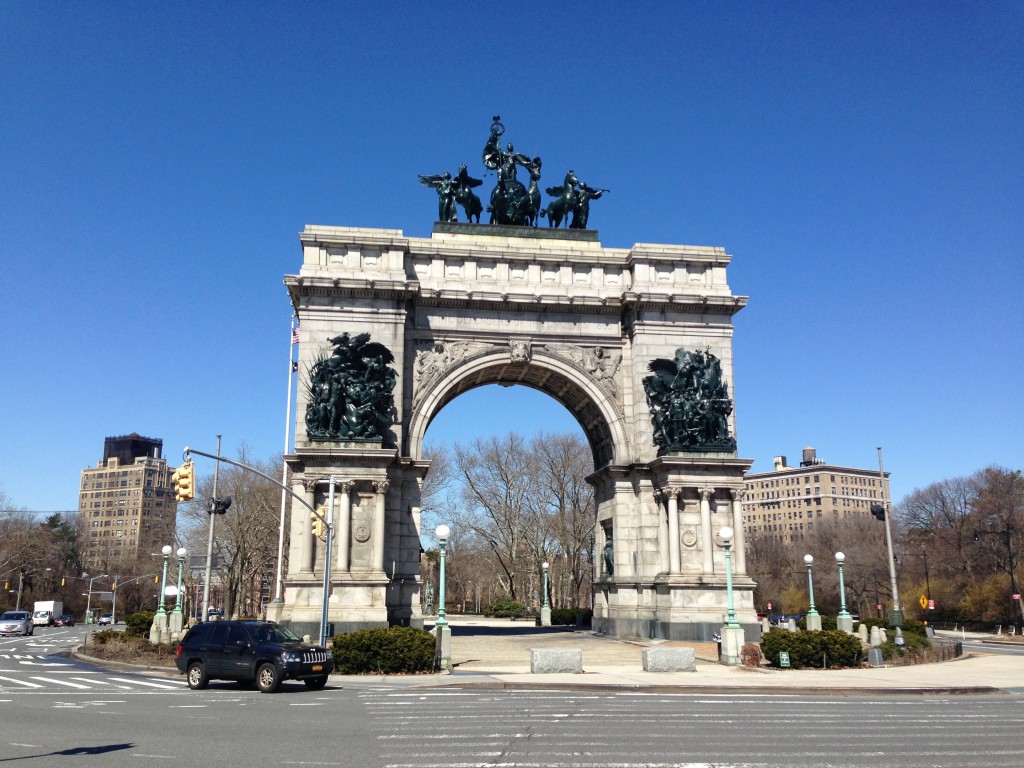 Grand Army Plaza is a great place to start a walk in Prospect Park, and home to an excellent farmer’s market on Saturdays. From here you can make a detour up to Flatbush Avenue, where, between 8th Avenue and Sterling Place, you’ll spot Franny’s, the casual yet fiercely beloved wood-fired pizza spot, which recently celebrated 10 years in business.

Nearby, at 8th Avenue and Lincoln Place, is the fabulous Montauk Club, a private club built in 1889-91 from a design by Francis H. Kimball in the Venetian Gothic style. Look closely and you’ll see a frieze wrapping around the entire building depicting the lives of the Montauk tribe. If you’re wondering it’s like inside, you may be amused by the club’s self-description: “The Montauk Club atmosphere is like that of a cocktail party in a Venetian palazzo…. The majority of our members are well educated men and women who stop in after work to decompress and enjoy a glass of wine or a well made drink, and a pleasant, often spirited conversation in a beautiful room.” 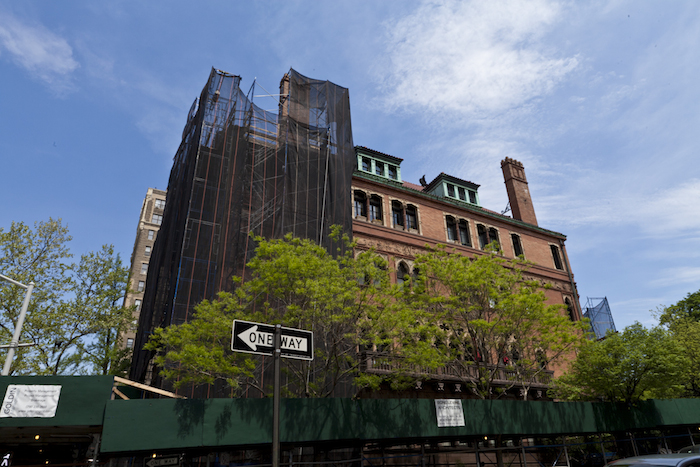 Head down the hill past 8th Avenue to 7th Avenue at any point to continue your Park Slope stroll. There are a few notable houses of worship in Park Slope, including St. John’s Episcopal Church on St. John’s Place between 6th and 7th, founded in 1826 by an abolitionist pastor. The congregation takes pride in its diversity, and the building itself is beautiful, with impressive stained glass inside. Grace United Methodist Church is right across the street. Not far away, on Garfield Place and 8th Avenue, Congregation Beth Elohim is known for cultural events, including Brooklyn by the Book, and for their commitment to volunteerism and social justice. 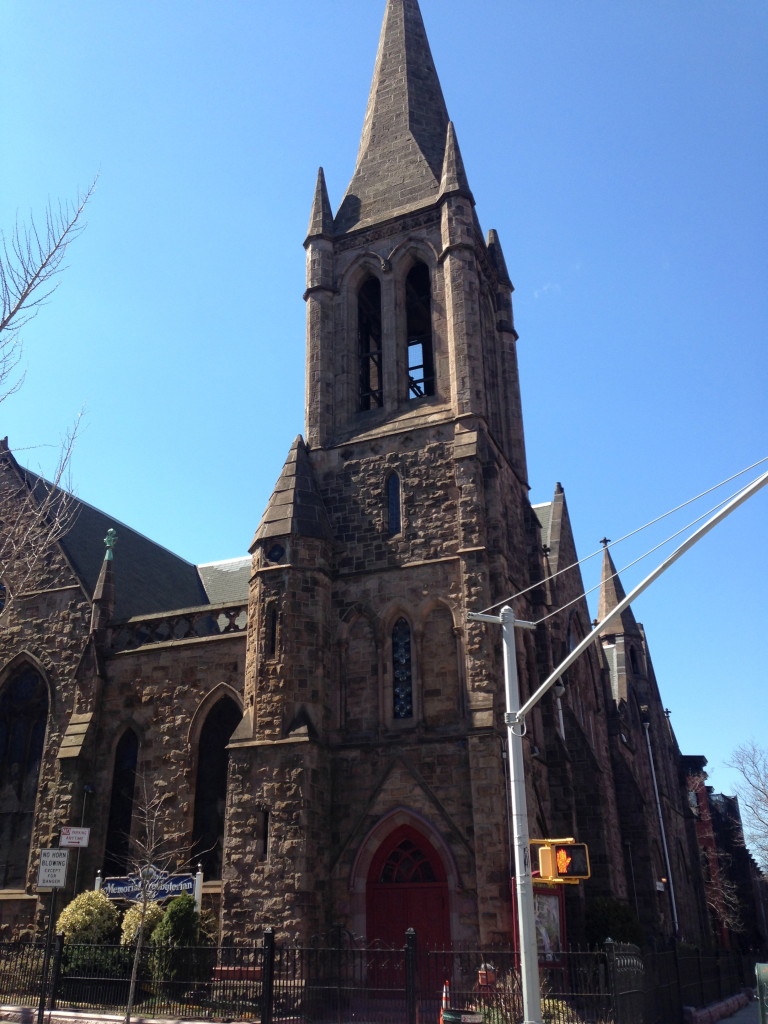 Back on 7th Ave. there are two notable schools in the block between St. Johns Place and Lincoln Place. First there’s the Brooklyn Conservatory of Music, a community music school with lessons, music education, and music therapy. Though it used to be a formal conservatory, the school now works with Music Partners, a non-profit dedicated to music enrichment. Around the corner, there’s the Berkeley Carroll School, a private K through 12. 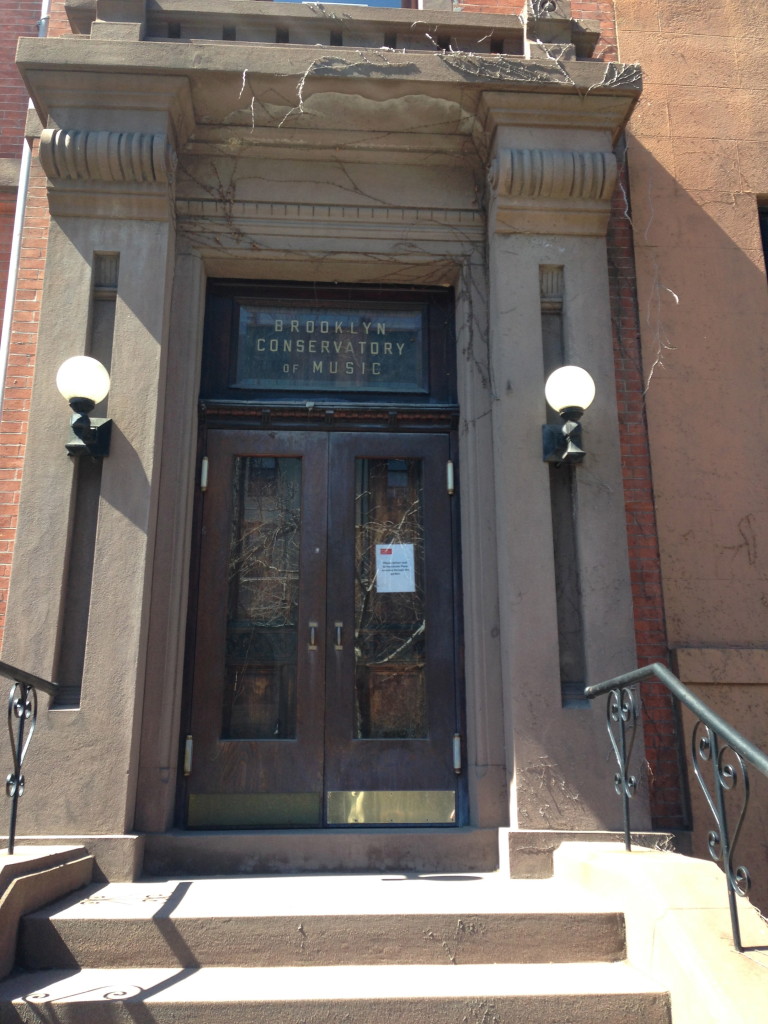 The Brooklyn Conservatory of Music

Once you get to Union Street and 7th Avenue, you’re in the heart of Park Slope. Turn right and walk down the hill toward 6th Ave. and you’ll see the Tea Lounge, a stroller-friendly cafe, bar, and restaurant filled with old couches, awkward first dates, freelancers toting laptops, and new parents. 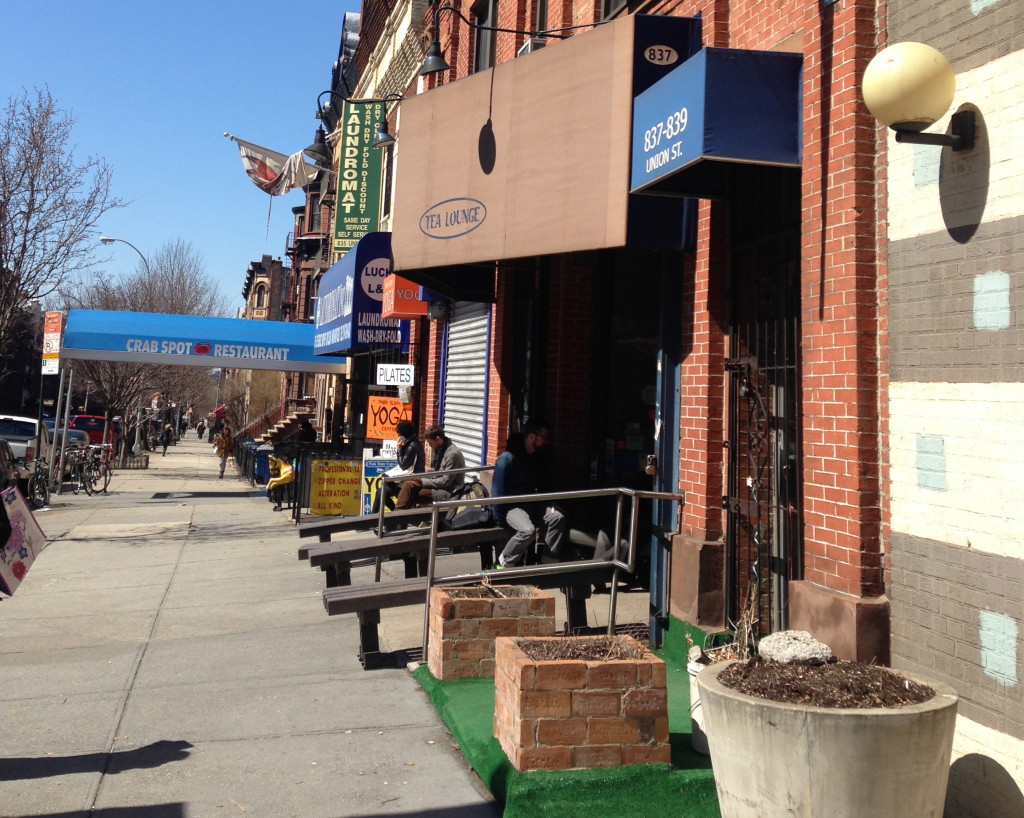 Across the street is the famous Park Slope Food Co-op, formed in 1973 and home to periodic scuffles between its 15,000 socially conscious members. And, if you continue down Union to 6th you will find a fancy  Union Market selling everything from artisanal chocolates to free range chickens to lattes. 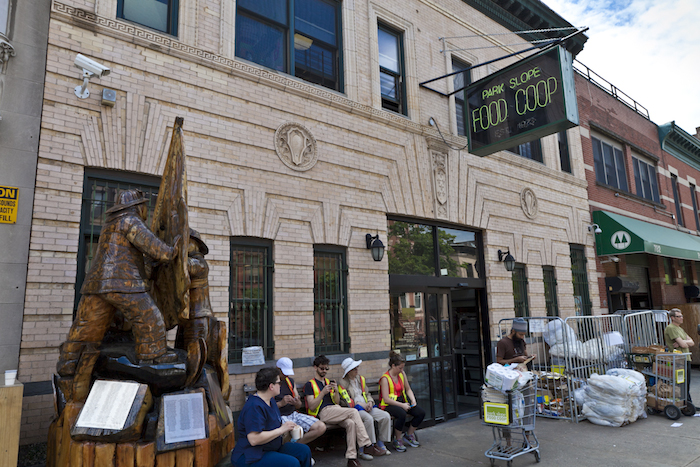 Closer to 7th, near the Co-op, People’s Pops, an artisanal popsicle company, recently opened a seasonal outpost. Their popsicles are all made of fresh, natural ingredients, resulting in delicious flavors like Peach, Chamomile & Honey and Rhubarb & Jasmine. 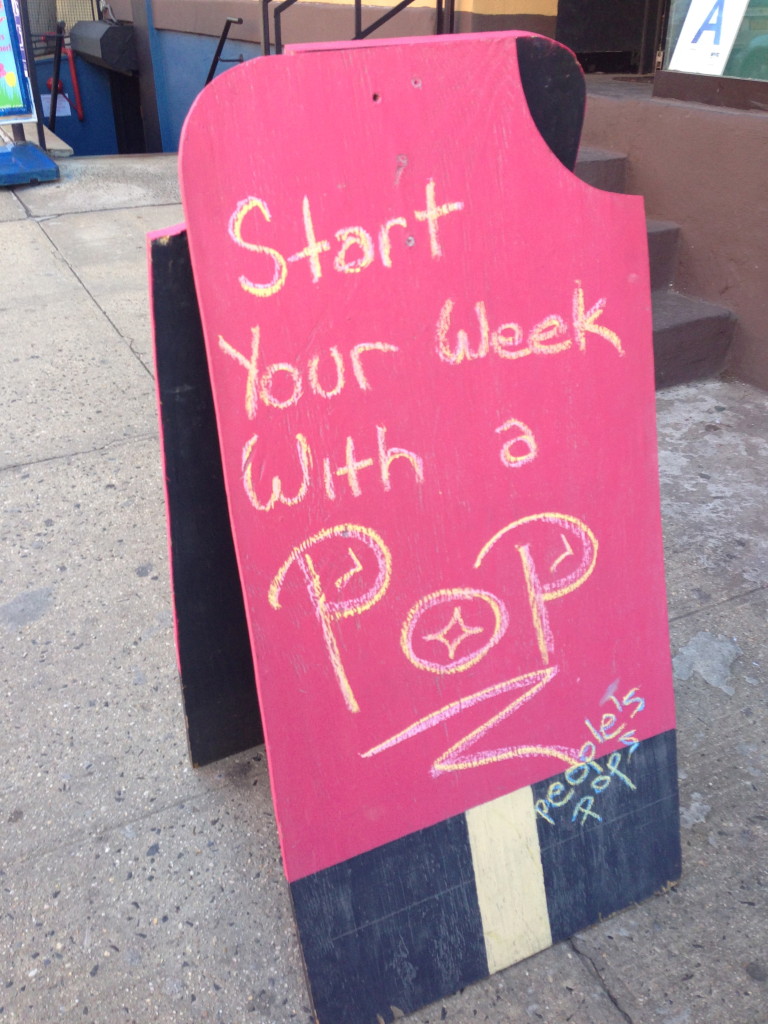