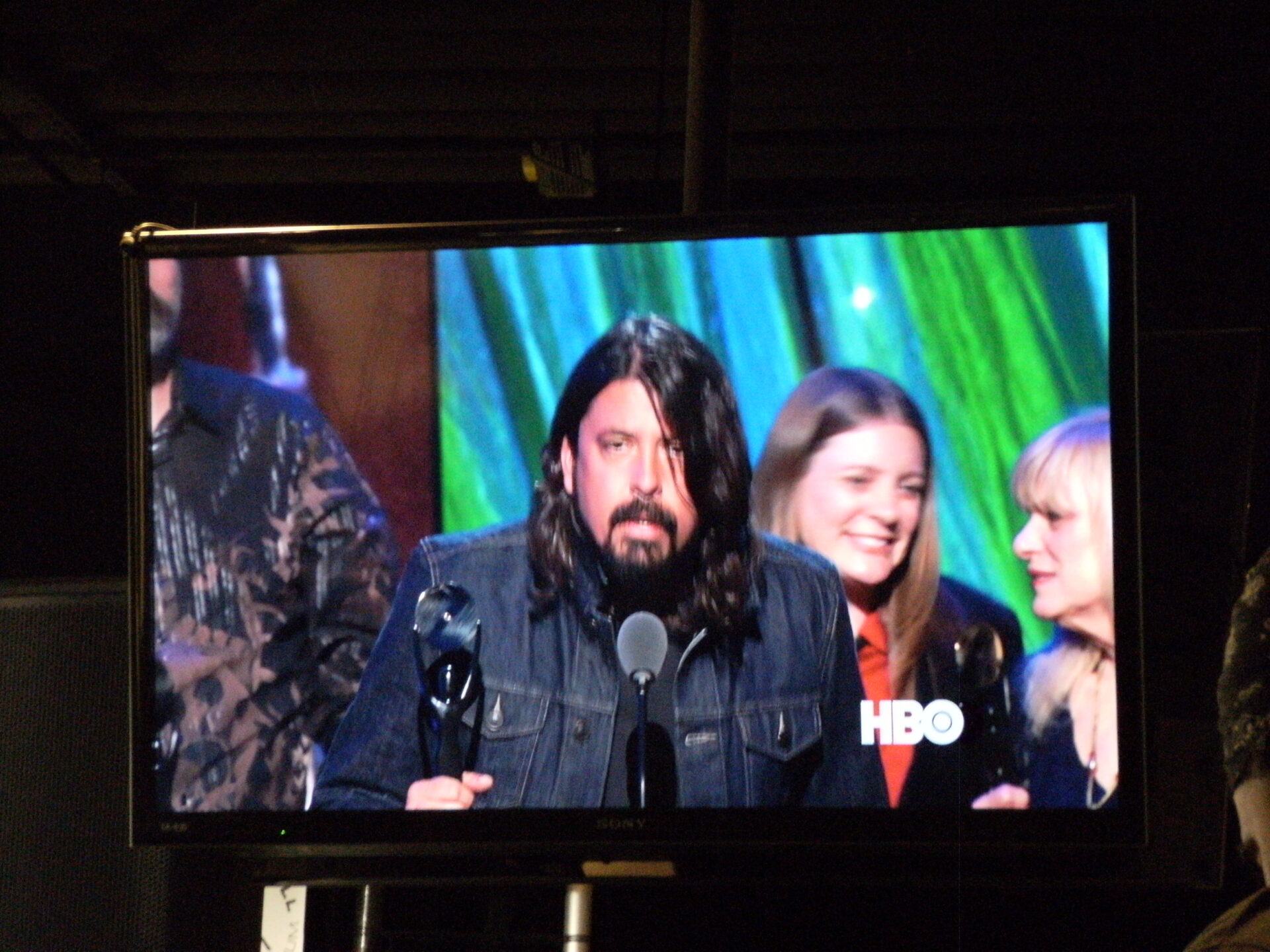 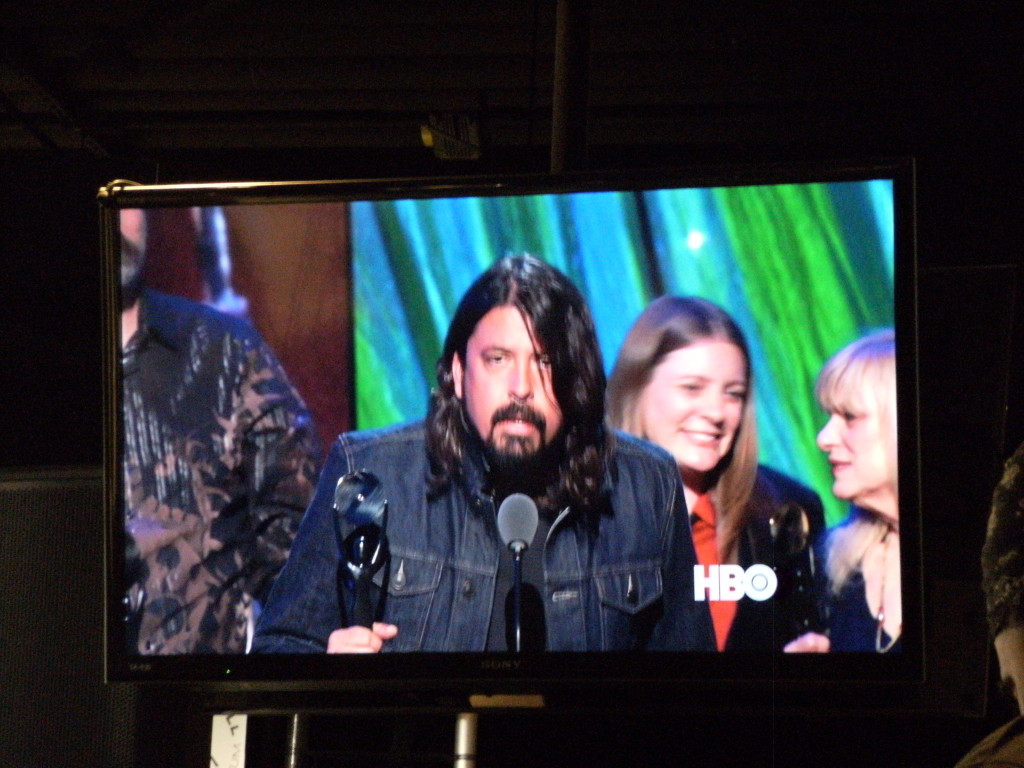 Former Nirvana drummer and current Foo Fighter Dave Grohl at the Rock and Roll Hall of Fame ceremony in which Nirvana was inducted. Photo: David Chiu

Nirvana was the last artist to be honored during the five-hour Rock and Roll Hall of Fame induction ceremony at the Barclays Center last night, which marked the first time it was held in Brooklyn. It was a very poignant moment given that last Saturday was the 20th anniversary of Kurt Cobain’s suicide. And though in his lifetime, Cobain struggled mightily with the notion of fame, and may well have had some reservations about last night’s pomp and circumstance, were he alive to attend, I’d like to think that he would have been inspired by the four generation and and genre-spanning artists who performed his songs.

Inducted by R.E.M.’s Michael Stipe, the surviving members of Nirvana, Krist Novoselic and Dave Grohl, along with Courtney Love delivered remarks about Cobain and the band’s music. That was followed by blistering performances from Novoselic and Grohl with special guests Joan Jett (“Smells Like Teen Spirit”), Sonic Youth’s Kim Gordon (“Aneurysm”), St. Vincent (“Lithium”) and Lorde (“All Apologies”). It speaks volumes of how much Nirvana’s music–despite only having released three studio albums–has influenced different generations of artists. 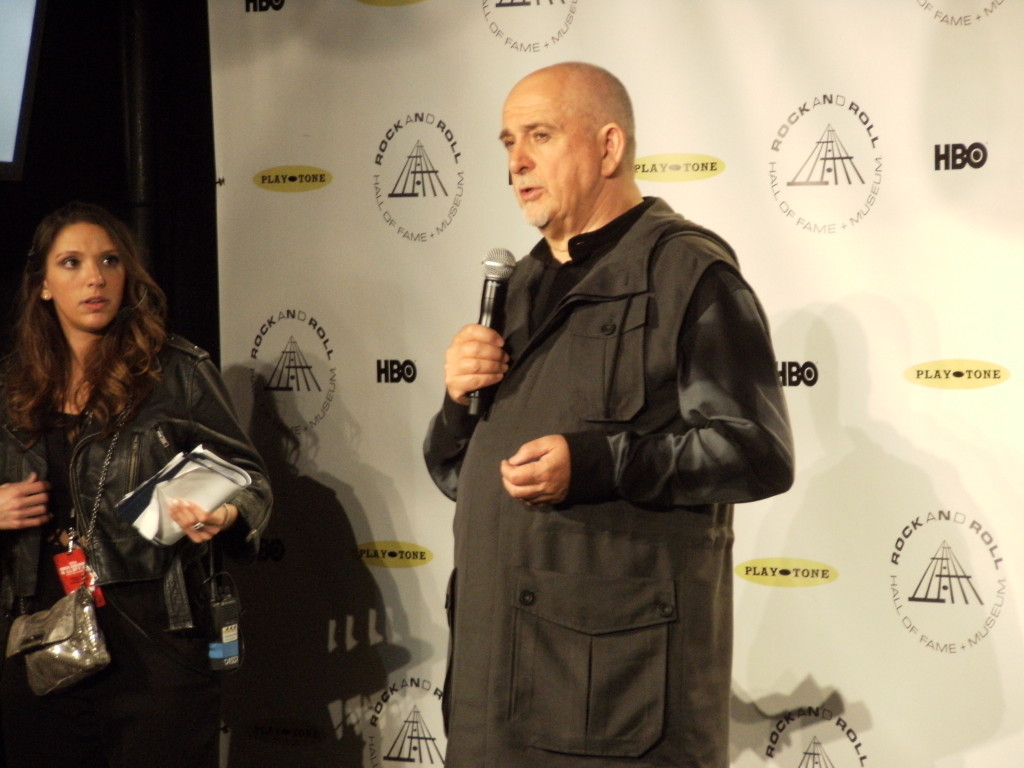 Peter Gabriel was inducted into the Rock and Roll Hall of Fame as a solo artist. Photo: David Chiu

Earlier in the evening the Hall honored a very eclectic group of artists for this year’s class, beginning with the legendary Peter Gabriel. He was inducted by Coldplay’s Chris Martin, who recalled listening to Gabriel’s 1992 album Us in his youth. Gabriel repaid the honor by performing “Digging in the Dirt,” “Washing of the Water,” and “In Your Eyes.” It marked the second time Gabriel had been inducted into the Hall, this time as a solo artist–he was previously honored as a member of Genesis. 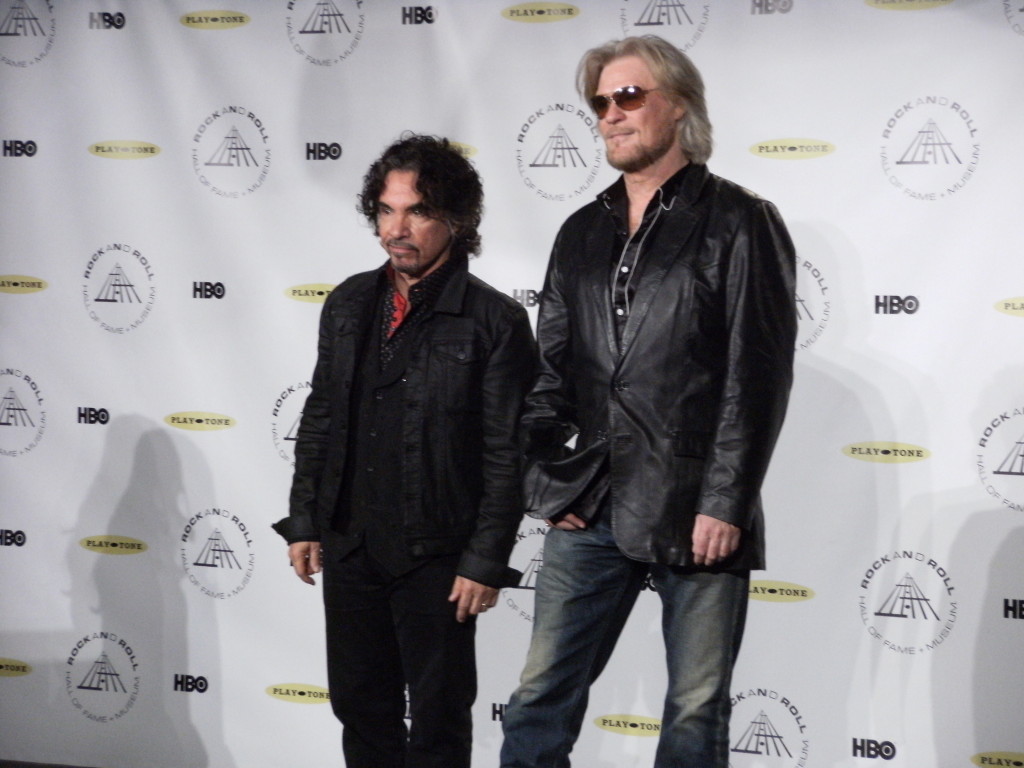 John Oates and Daryl Hall, the newest members of the Rock and Roll Hall of Fame. Photo: David Chiu

A major oversight was finally corrected last night when Daryl Hall and John Oates received their inductions into the Hall, courtesy of the Roots’ and fellow Philadelphian ?uest love. During their speech, Hall made a rather impassioned plea for more Philly artists to be in the Hall, specifically Todd Rundgren, The Stylistics, and Harold Melvin and the Blue Notes. With their trademark hybrid sound of rock and soul, Hall and Oates performed “She’s Gone,” “I Can’t Go For That (No Can Do)” and “You Make My Dreams.” 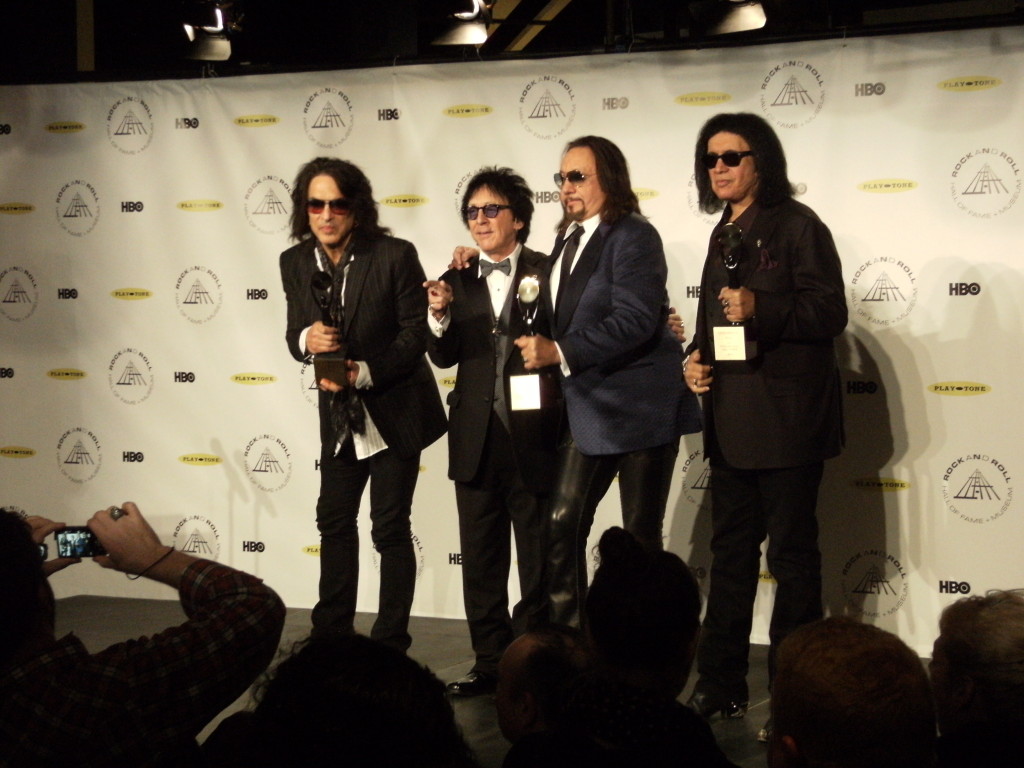 Rage Against the Machine’s Tom Morello delivered an over-the-top yet heartfelt speech in his introduction of hard rock band and new RRHOF inductee Kiss. Recent controversy swirled around Kiss prior to the ceremony over the exclusion of the latter members of the band into the Hall. Yet for this one night, the original four members–Gene Simmons, Paul Stanley, Peter Criss and Ace Frehley–appeared together harmoniously and graciously in accepting their awards.

Art Garfunkel inducted British folk pop singer Yusuf Islam, who is much better known as Cat Stevens singer of ’70s hits like “Morning Has Broken” “Wild World” and “Oh Very Young.” Stevens, who reemerged in public in the last several years after a long hiatus due to his conversion to Islam, performed some of his beloved songs, including “Father to Son.” 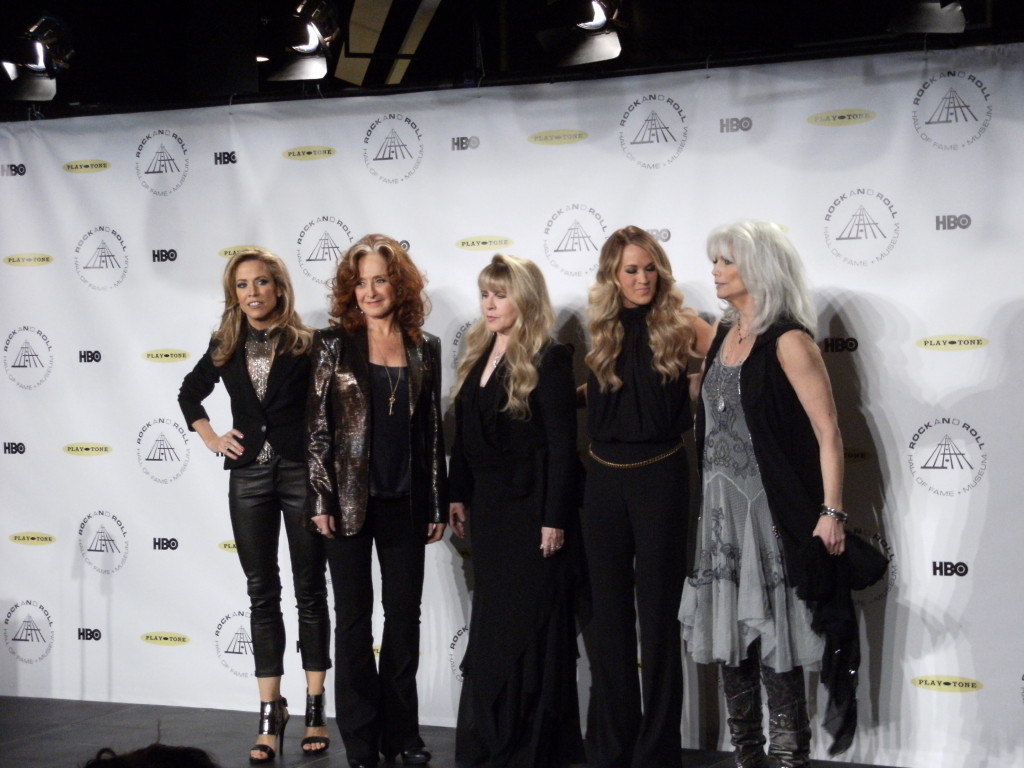 Linda Ronstadt, one of the greatest and most versatile singers in pop music, wasn’t able to make it for her induction into the Hall. But it wasn’t necessary thanks to some old and new friends. Instead, she was serenaded by an all-star cast of Sheryl Crow, Carrie Underwood, Stevie Nicks, Bonnie Raitt and Emmylou Harris on some of the songs that Ronstadt had popularized: “Blue Bayou,” “It’s So Easy,” “When Will I Be Loved,” and “You’re No Good.” 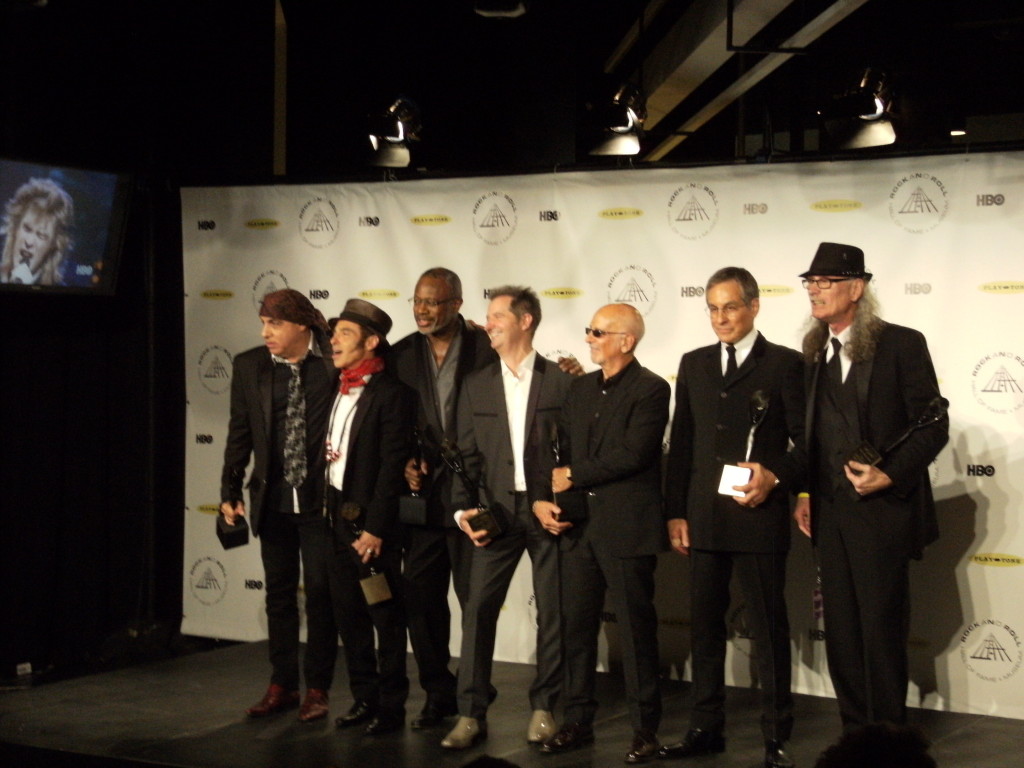 The E Street Band, the iconic group who had backed Bruce Springsteen for over 40 years, was honored in the sidemen category–appropriately, the band was inducted by the Boss himself. Again, it was a rather poignant moment since two of its beloved members, organist Danny Federici and saxophonist Clarence Clemmons (the Big Man) passed away. Together the band and Bruce performed “The E Street Shuffle” and “The River.”

At the very beginning of the program, music producer/ manager Peter Asher honored Brian Epstein and Andrew Loog Oldham, who as managers guided the careers of the Beatles and the Rolling Stones respectively. During the event, a memorial clip paid tribute to those who died in the last year, including Pete Seeger, Lou Reed, Phil Everly, and Devo members Bob Casale and Alan Myers.