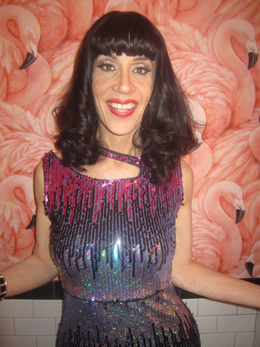 If shooting shuffleboard at the Royal Palms has given you a taste for geriatric gaming, be sure to expand your repertoire by swinging through on Wednesday to check out weekly bingo night. Don’t worry, this isn’t your typical stuffy church basement affair—it’s hosted by Linda Simpson and Murray Hill, celebrity drag personalities who have earned some serious bingo-emceeing chops over the years at venues all over the city. Last week, participants competed for prizes like a velvet painting, a crazy light-up laser gun, and a cold hard cash jackpot. Tiebreakers were decided through dance-offs and best underwear contests up on the big stage, which were as entertaining to watch as you would think it would be. There is no cover and bingo cards are $2 a pop, so if you throw in a beer or two and a cheap dinner from whatever food truck in in the bay (this week it’s tacos from Country Boys), you’ve got yourself a fun and budget-friendly weeknight out. Just make sure you don’t space out or you might miss your winning number!