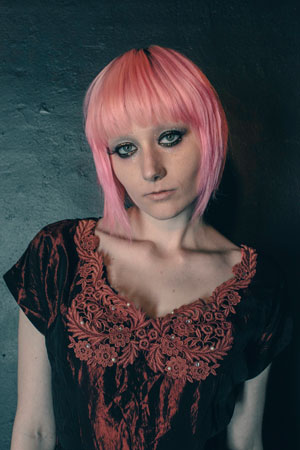 The first thing you might think when listening to Jessica Lea Mayfield’s music for the first time, especially her new album, Make My Head Sing, is how reminiscent it is at times of the Black Keys. Well, there’s a connection between Mayfield and that band–the Black Keys’ Dan Auerbach produced the up-and-comer’s previous albums, 2008’s With Blasphemy So Heartfelt and 2011’s Tell Me. Mayfield has also opened for the band onstage. Something must have rubbed off during those collaborations because her terrific new record (which she co-produced with Jesse Newport, her husband and bassist ) possesses a similar noisy, electric guitar-dominated spirit.
The track “Oblivious” opens the record with some heavy guitar and a pile-driving beat accompanied by Mayfield’s otherworldly, out-of-body vocals and Southern Gothic tension.The album’s first single, “I Wanna Love You,” is deceptively melodic and upbeat despite the narrator’s stalker-ish tendencies (“I’m insane/I wanna love you” and “I’m standing outside your house/Watching what you do”). This is the Police’s “Every Breath You Take” or Sarah McLachlan’s “Possession” for a new generation.  From there on, the album is mostly burningly raw rockers with some shimmering and ripping guitar (“Pure Stuff,” “Unknown Big Secret”) and a few stark and moody slow tracks (the very depressing “Party Drugs,” “No Fun”). There are also moments when the songs recall British post-punk, grunge and New Wave.

Ironically, the final track “Seein’ Stars,” closes the album on an almost optimistic and romantic note following the tension and drama of the previous songs, which I can only imagine will sound even louder and rawer when she takes the stage for her two New York City appearances. It’s hard to imagine that this artist from Ohio is only 24 (I have vinyl albums older than her) and already Mayfield has three full-length albums under her belt–but she sure sounds like someone whose world-weary eyes have seen it all.