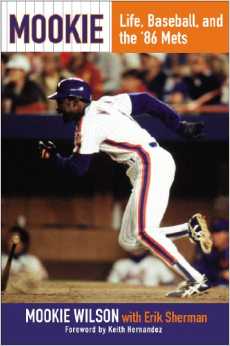 New York Mets fans will never forget Oct. 25, 1986: Game six of the World Series between the Boston Red Sox and Mets at Shea Stadium. Tied at 5-5 in the bottom of the 10th inning, Mets outfielder Mookie Wilson hit a ground ball that unexpectedly went through the legs of Boston first baseman Bill Buckner. It allowed the Mets to tie the series and eventually win the championship–a legendary moment in Mets history that Wilson is now recalling in his new memoir, Mookie: Life, Baseball and the ’86 Mets. The book, which Wilson will sign copies of this Thursday at the BookMark Shoppe in Bay Ridge, is already making news for his frank comments about his current role with the Mets and insider’s view of the volatile 1986 team that included Keith Hernandez, Gary Carter, Darryl Strawberry and Dwight Gooden. It promises to be a hot read for fans, who can now relive the Mets’ mid-’80s glory through the perspective of a beloved player.