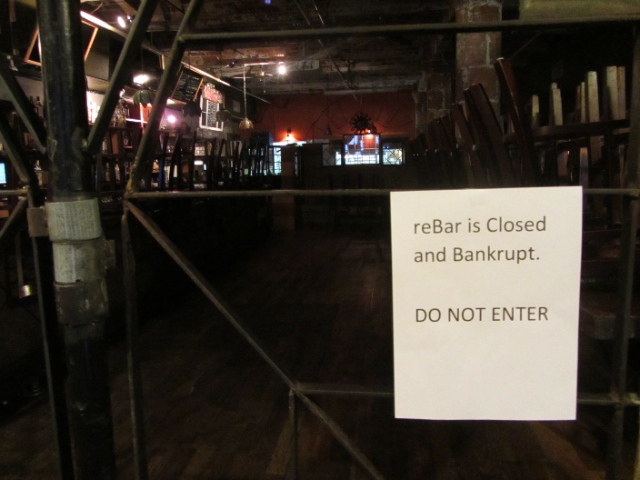 When my fiancée and I got engaged last December, reBar in DUMBO was the first and only venue we looked at. For two Brooklynites who wanted a fun wedding but had no desire to plan a wedding ourselves, reBar was a no-brainer. For one flat per-person fee, they provided the entire package: ceremony, reception, food, open bar, DJ, flowers, security…the whole nine yards. It’s a beautiful, industrial-chic space, the entire staff was friendly, and we loved the food tasting. We decided right then that we were going for it, and spent the past four months congratulating ourselves on what a stress-free wedding we planned. We greatly enjoyed shocking friends and family by telling them that we really didn’t have anything left to do.

On Friday afternoon, as I was boarding a plane to go to a friend’s (meticulously planned) wedding in Tulsa, another friend sent me a link to a story on Gothamist reporting that ReBar was closed and bankrupt. Many of the venue’s employees turned up for work Friday morning to find the place padlocked with a sign reading “reBar is closed and bankrupt. DO NOT ENTER.” Said employees, along with the hundreds of couples who have upcoming weddings booked and largely paid for at reBar, commenced freaking out.

Since then, Gothamist, which has been on top of the story all weekend, has reported that reBar owner Jason Stevens allegedly owes $2.5 million to the IRS, and that he took off with more than $150,000 in wedding deposits before shutting the place down. No one on staff at reBar seems to have talked with him, or knows where he may be, and anyone getting their money back is increasingly looking like a long shot.

Our wedding is planned for July 18th and we have already paid $16,000, the majority of the cost for the whole event. There are reBar weddings booked every weekend for the rest of the year, and into 2015, even 2016. Most of those couples are out as much money as we are, if not more. (ReBar also sold catered packages at nearby DUMBO Loft, and while the couples who booked weddings there aren’t out of a venue, some of them have likely lost some money to reBar as well.) And of course, reBar’s 35 employees are out of a job. Friday was payday and no one got a check for the work they have completed in the past two weeks.

For those who had weddings planned for this week, the situation is a nightmare to say the least, and more than a few have had some choice words for Stevens. On the other hand, reBar’s ex-employees have been absolutely amazing. The venue’s two wedding planners, who now must be facing serious financial hardship themselves, have been working tirelessly to help the stranded couples find new venues and vendors, even though they are no longer employed by reBar. And a whole bunch of reBar staff members, vowing that this past weekend’s weddings would go on, volunteered to work for free at two weddings, one of which was moved down the block to Baco, and another to Bacchus. Several others event spaces across the borough have pledged to give significant discounts to those who need to book a new wedding, including DUMBO Loft.  Some of those places, like Atrium, have also encouraged reBar’s employees to send on their resumes. An indiegogo campaign has been launched to help couples offset their losses, and there is also a Give Forward fundraiser to help the employees.

As for my formerly stress-free bride and I, we’ll be spending the week visiting venues that have been kind enough to set-up last-minute meetings and have said they’ll work with us to keep pricing down as much as they can. We sent our invites out last week and have family coming in from across the country and as far away as Ireland, so changing the date isn’t really an option. We have been incredibly touched though, by the way in which reBar’s former employees, and the entire DUMBO/Brooklyn community, have reached out to help in any way they can.

We know that many worse things have happened in the world this weekend, and that it will all work out in the end. Come hell or highwater, we’re still getting married, and that’s what counts, not the party or the money. But, you know…$!#!%$#$!

If you work at a local venue or vendor that may be able to help stranded couples or the dedicated reBar employees who now need jobs–please leave a comment below.

Brooklyn venues we have been in touch with that have already offered to cut costs on available dates, and who have reached out since this article was published (there’s contact info for many of these in the comments, plus suggestions for other great spot) include:

There is also a google doc of vendors and venues who are helping displaced couples.