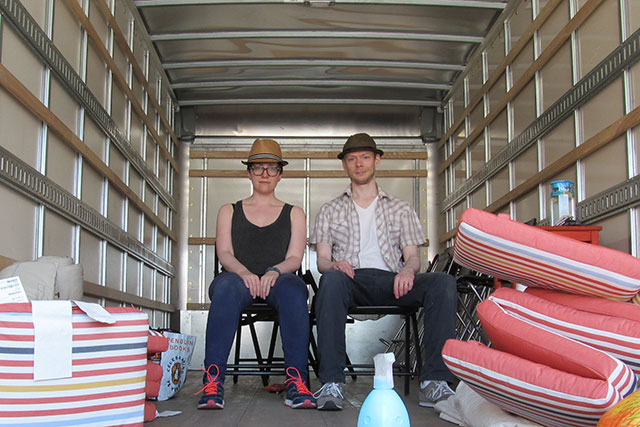 New York ‘s art scene is inherently nomadic, migrating across the city from SoHo to Williamsburg, Bushwick and the Bronx searching out affordable spaces in which to create, exhibit and perform. These days though, even artists willing to uproot are finding cheap rents nearly impossible to come by, no matter how remote the real estate. Rather than scour the city, some artists are finding creative freedom on four wheels. Art trucks, somewhat like food trucks before them, are gaining momentum among a creative sect willing to leave brick and mortar behind for a more mobile existence.

Jean Ann Douglass and Eric John Meyer, co-founders of The Truck Project and early adopters of the mobile art movement, are currently staging a pair of short plays out of the back of a 24-foot rental truck in Williamsburg.

Ticket holders get directions to their four-wheeled theater four hours before the curtain goes up, which in this case is an industrial rolling door. Space, as you can imagine, is limited. Sixteen people at a time file into the parked truck’s cargo hold for a 30-minute play, followed by a 15-minute intermission at a nearby bar and then a second 30-minute play back in the truck. Both pieces were written and are performed by Douglass and Meyer, who make it a habit to grab a drink with their audience after the show to discuss the intricacies of creating art in an automobile.

“It helps us under-promise and over-deliver,” Meyer says. “You don’t expect all that much from theater that’s in the back of a truck. Most people get excited about it because of the novelty. When the artistic quality is also high, it’s a great surprise.” 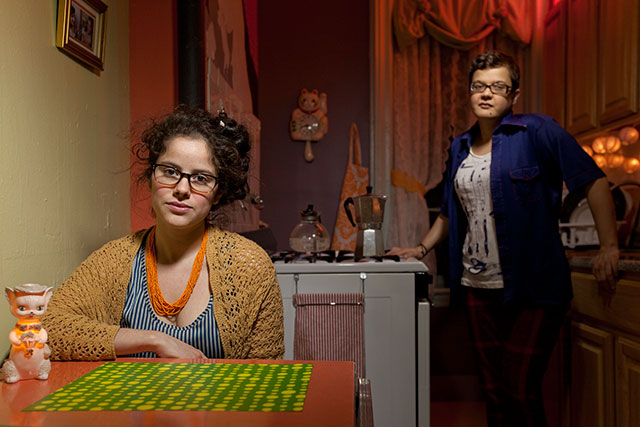 When Cara Reynolds and Maria-Emilia Borja decided to convert a box truck into an art shop on wheels, they were concerned with keeping their overhead down.  The two women are the co-founders of Mushpa y Mensa, a small eco-boutique through which they sell their own illustrations screenprinted on organic cotton T-shirts,  jewelry and decorative arts created from recycled plastic bottles. Their art truck, which they’ve named Maya, is without precedent–and without permits.

“There are only a few handfuls of us, and we all struggle with the same issue,” Reynolds says of the art truck movement. “In NYC, a rental space is incredibly expensive, and a huge investment in itself. We can either pay for a space at a market, or take a risk, park in a corner and potentially get a fine. It’s like the wild west in a sense. No regulations, equals no laws, which equals no permits.”

Like food trucks before them, these art trucks are reacting to sky high real estate prices that make renting a space next to impossible. “Retail in a truck, or in our case, art in a truck, is something NYC will have to deal with eventually,” says Reynolds. “The fact of the matter is that this is the most affordable way to do this for us at this moment in time. For us, a truck is a creative way to overcome this obstacle in our path.”

As artists though, Mushpa y Mensa and The Truck project aren’t simply finding a clever workaround to high rents, they’re incorporating their surroundings into the experience of their work. “Theater in trucks isn’t for everyone,”  says Douglass. “But for the adventure-seekers that make up our audience, the crazier the elements, the better.”