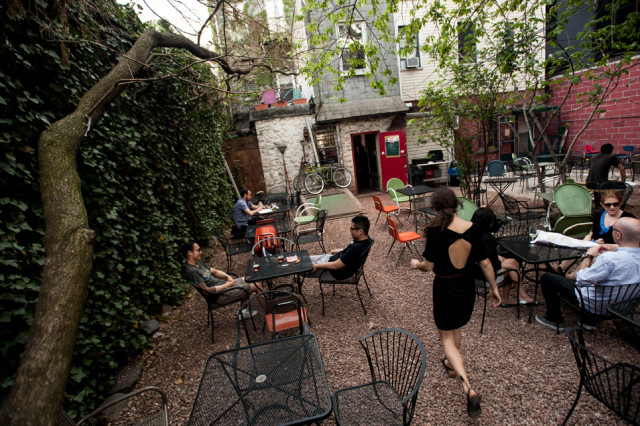 Most people can enjoy any cold beer in the sunshine–these bars are made for aficionados who care about the range of beers on a draft list, and how often it rotates. The fact that they all offer sweet patios and gardens to kick back in will just extend your drinking session.

An oldie but a goodie, Spuyten Duyvil’s beer garden is still the prettiest paradise for beer lovers. Photo:

Uncle Barry’s (Park Slope, 58 5th Ave. between St. Marks and Bergen, 718-622-4980) I’m going to be totally honest here: my relationship with Uncle Barry’s is a little bit love/hate. The man in my life, a beer fanatic/lunatic who attempts to plan our vacations around brewery visits and arranges FedEx bottle swaps with people he meets online, discovered this bar a few years ago and it instantaneously became his Cheers. He knows everyone there and has a regular seat, and I’ve more than once been reduced to calling the main number to look for him–a la Lilith Crane–when his phone is going straight to voicemail. Obviously that gets old, and as a person whose beer palate is pretty unrefined, it’s hard for me to really appreciate the things about UB that make Lawrence so happy: hard-to-find brews like Piraat, vintage Victory at Sea, and Hill Farmstead, one offs and collabs, beer release events, and a bunch of people who will talk to you about beer for hours on end, whether you’re a newbie or a seasoned hophead. What I do love is the bar’s Wednesday night trivia, its friendly vibe and the relaxed, sunken outdoor area in back, which I’ve never sat in without striking up a conversation with the people at the picnic table next to ours.–Kate Hooker 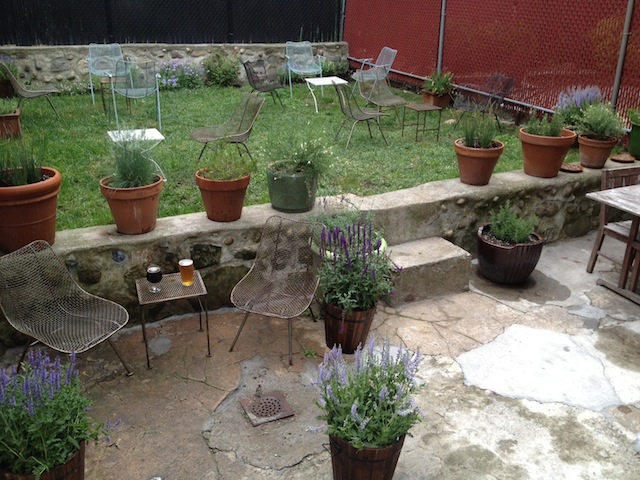 In back of Covenhoven is a perfect patch of green for your pints. Photo: Covenhoven

Covenhoven (Crown Heights, 730 Classon Ave., 917-449-6793) There’s a reason why it’s so much more fun to be a beer snob than a wine snob, and it’s mostly that it feels infinitely less, well, snobby. This Crown Heights newcomer is a perfect example of why, as it manages to be one of the city’s most serious new beer destinations, and also one of Brooklyn’s most comfortable neighborhood bars. The draft lines are a constantly rotating mix of flavor-bursting Belgian sours, rare West Coast finds, and seasonal New York City brews. The friendly owners, who live just upstairs, encourage sampling ales before committing, and there’s even more variety on offer in the on-site bottle shop section of the store, where hundreds of brews from around the world can be bought to stay or go, so even the most seasoned beer nerd will always find something new to sip on. The grassy backyard, equipped with low-slung lawn chairs, is the suburban-style patch of green you wish you had every summer sunday, while at the front of the bar, the garage door entrance opens up high to make even indoor drinking a little more outdoorsy, with airy breezes and prime people-watching opportunities streaming in from Classon Avenue.–Brendan Spiegel

Bierkraft (Park Slope, 91 Fifth Ave. between Berkeley and Union) For people who are serious about beer, this place is a beer nerd’s delight, with a stellar collection of rare and interesting brews curated by a staff of Ph.D.-level aficionados. The good-sized yard is scattered with picnic tables and mini globe lights and is the perfect place to nurse a pint and split one of the huge house-made cheese and charcuterie sandwiches, a bag of complimentary Zapp’s chips, and locally-sourced chocolate with a drinking buddy.–K.H.

Hot Bird (Clinton Hill, 546 Clinton Ave. between Fulton and Atlantic, 718-230-5800) Ever since it opened in an old garage, obscured by a tall red fence, and surrounded by constant street construction, Hot Bird has been easy to miss, were it not for the party of bicycles chained up near the entrance. This is the dead giveaway that something good is hiding within. Inside that fence lies picnic tables, and space for more than Clinton Hill’s fair share of beer drinkers. Here, the list of drafts, mostly craft and local, change with such a frequency that it’s hard to have the same thing twice. The full bar and prosecco offerings round out the options. A few things have changed now that it’s grown up– BBQ joint next door no longer delivers, you have to pick it up, and kids are no longer allowed, to the delight of many in the neighborhood.–Lauren Bell

Washington Commons (Prospect Heights, 748 Washington Ave. at Park Pl., 718-230-3666) Only in Brooklyn could a beer bar this serious about its suds be known primarily for its pretty patio. The back courtyard is indeed a shrine—one of the biggest outdoor areas in this stretch of the borough, it’s constantly filled on weekends with everyone from rowdy post-sports groups to couples cozying in the corner to parents with strollers in tow. Beer-lovers who come for the outdoors effect will be pleased with the tap selection, too, a rotating list of rare, high-A.B.V offerings from across the country, with dozens more by the bottle.–BS

Other serious beer gardens of note:

Mission Dolores: (Park Slope, 249 4th Ave. between Carroll St. and President St., 347-457-5606) A service station turned beer lovers’ haven, Mission Dolores trades in greenery for an interior courtyard unlike any other outdoor drinking spot–and they update their list of 20 beers and one cask ale on draft daily.