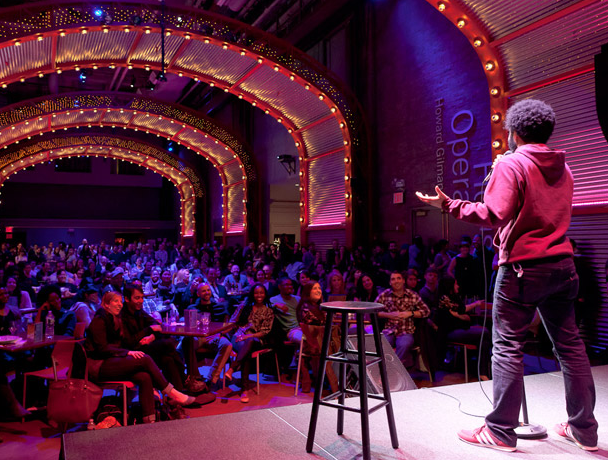 A night at Get it Out There. Photo: BAM

Get it Out There at BAMcafé is basically the best setting for stand-up in Brooklyn. There is no other venue here that gives you the fancy comedy-club feel, minus the annoying drink minimums and cramped seating. But it’s coming to an end. This Thursday is the last installment of its spring season, but more importantly, it’s likely the last time Caroline Creaghead will be putting her imprint upon this showcase. The woman responsible for booking some of the coolest series in Brooklyn comedy, like Big Terrific and formerly, Pretty Good Friends, is leaving the behind-the-scenes world of stand-up producer to begin producing her own work. Even if you don’t recognize all the names on the lineup for this Thursday—Claire Titelman (Chelsea Lately on E!), John F. O’Donnell (Keith and the Girl podcast), and Kurt Metzger (Comedy Central Presents Kurt Metzger) and host Jared Logan (VH1’s Best Week Ever)–rest assured, Creaghead has a knack for introducing audiences to rising stars. Arrive early to get a seat.