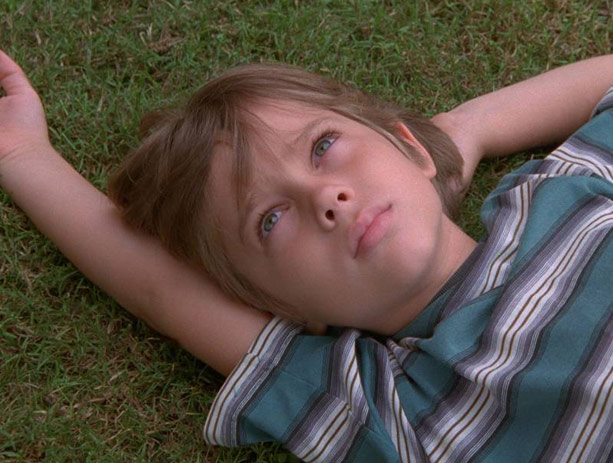 It’s slightly embarrassing to admit, but sometimes running times for movies confuse me. I’ll occasionally forget that the clock is in base 60, not base 10, and that 120 minutes is two hours, not an hour and change–like my brain wants time to be on the metric system. So when I walked into the press screening of Boyhood and overheard another attendee say, “Are you ready for the next three hours?” I thought, “What’s this guy talking about? This movie is only 163 minutes long.” Then I realized my mistake, cancelled my lunch date and settled in.

If you’re not familiar with the set up, here goes: director Richard Linklater and his cast spent 12 years making this movie, filming a few days each year to capture the passing of time for an unremarkable family in Texas. Yes, it sounds potentially gimmicky, but the result is like watching all of the emotional content in a television show or mini-series like Six Feet Under or Best of Youth, condensed down into three hours, and without any major drama. No one gets cancer, no one dies, there are no car crashes or teen pregnancies; life just unfolds. Boyhood reminds you what film can do and the choices it demands from directors, in an era in which television, and its ability to host sprawling plots and bloated storylines, rules the roost.

As the title would suggest, Boyhood most closely follows a young boy named Mason (Ellar Coltrane), from elementary school through the end of high school. Mason doesn’t fall into one of the easy boy archetypes we see on screens of all sizes–he’s not a jock or a bully, he’s not shorthand for ADHD, he’s not a straight-A student, or a tortured loner. He’s a dreamy, introspective kid (his gregarious sister, Samantha, played by Linklater’s daughter, Lorelei Linklater, threatens to steal the film from him in several scenes) with an artistic bent, but without the broad strokes of the Hot Topic-sourced wardrobe you generally see on teenagers in movies who are supposed to be cool and different in some way .

Mason’s divorced, but uneasily amiable parents, played by Patricia Arquette and Ethan Hawke, who together could bankrupt the orthodontists of American with their charmingly snaggletoothed smiles, act more like the families you probably know than what we’ve come to expect on the screen.  Arquette especially is a heartbreaker as a super smart, determined single mom with a will of iron and terrible taste in men.

The refreshing thing here is that Boyhood gives its characters credit for being able to cope with human nature–and human mistakes–without falling to pieces. The parents in the film love their kids. They also make bad decisions, and then try to make up for them. Mason and Samantha absorb these experiences and move on, changed but intact. Some mistakes get repeated. Everyone grows older. That may sound trite, and it certainly sounds boring, but I think it’s a testament to that fact that we so rarely see family life depicted with such level-headed compassion and nuance that Boyhood absolutely mesmerizes for each one of its 163 minutes.

Boyhood  is the opening night feature at BAMcinemaFest; tickets are sold out, but standbys may be available the day of the show at the box office.