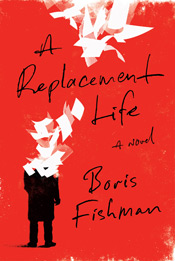 Away from the sleek towers, quirky manicures and high-end coffee shops of gentrified Brooklyn, a myriad of other New York experiences swirl and flow, some more familiar to fellow residents than others. A Replacement Life, by Boris Fishman, perhaps the only novel you’ll read this summer that is as much a page turner as a thought provoker, delves deep into the vast ranks of Russian speakers populating South Brooklyn.

Our hero is Slava Gelman, a young writer who has fled the confines of Bensonhurst for a tiny apartment in Manhattan and staff job at a fictional iteration of The New Yorker, known in the novel as Century. Slava’s career is somehow stalled, his voice, interests and the very timbre of his personality at odds with the high WASP style of his publication. Slava, along with his parents and grandparents, emigrated to the U.S. from Belarus, by way of Italy when he was a child, joining a community of Russian-speaking Jews from all over the former Soviet Union, bound by a common language, and the experience of living through the Nazi invasion only to become reviled and marginalized in Soviet Russia.

Shortly after the death of his beloved grandmother, a survivor of the Minsk ghetto, Slava’s grandfather, Yevgeny Gelman, a crafty provider who neighbors refer to as “a child of other people’s gardens,” tasks his grandson with filling out his grandmother’s Holocaust reparations application, only transferring her story to Yevgeny, who waited out the war in Uzbekistan. This begins Slava’s role as a spinner of tales for a variety of elderly friends and neighbors, projecting his grandmother’s suffering at the hands of the Nazis onto dozens who suffered at the hands of the Soviets and Pole, Belarus soldiers and in the Red Army.

Two love stories, one with a co-worker, the other with an old family friend, are woven into the intrigue, as Slava struggles to tease apart identity and narrative, higher truth and literal truth, and what it means to suffer. Though this is in no way a beach book, Fishman’s storytelling is so compelling that you may find yourself throwing this in your tote along with the US Weekly.

More of our summer reading recs>>