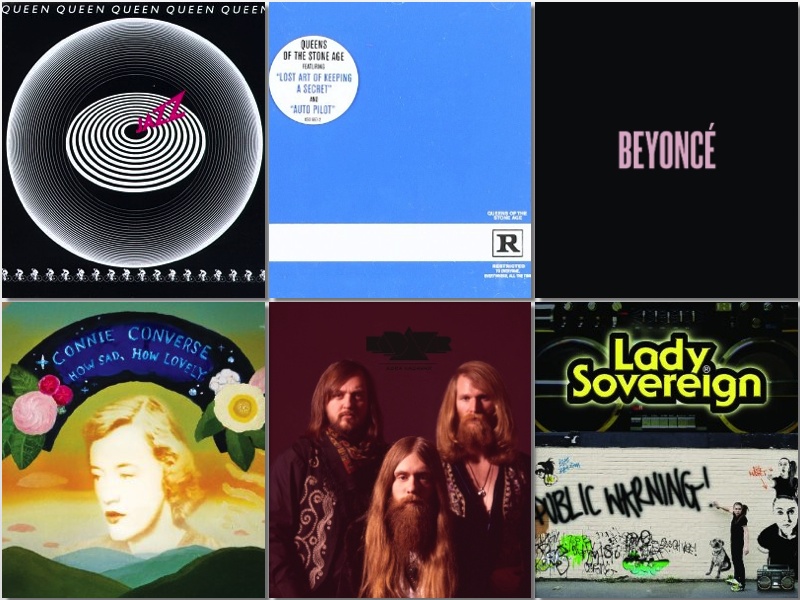 In a city as culturally diverse and and opinionated as New York, you find eclectic tastes in pretty much everything, and especially in music. We asked three locals to share a 10-song playlist with us, and to riff on why they chose each track. So give these tunes selected by your neighbors a listen. Who knows–you may discover a new favorite artist or a soundtrack that gets your day going.

So this playlist is the one I call “Birthday” because I put it together recently on the eve of my 33rd b-day. I’m not a morning person, so I’ve always relied on music to wake me up and help me pick up the pace. This playlist does just the trick.

1) “Grown Woman“–Beyonce
This is my anthem right now. I feel like I’m finally in a place where my life is in some kind of order and no one can tell me what to do. In other words, “I’m a grown woman. I can do whatever I want.”

2) “Happy“–C2C
This song does exactly what the title promises. It makes me really, really happy and makes me want to dance. Also, check out the music video. It’s directed by the amazing Wendy Morgan and has some of my all-time favorite choreography in it.

3) “Happy“–Pharrell Williams
Do you have “Happy” fatigue? Too bad. I don’t. I love this song and it keeps the previous theme going.

4) “Man Woman Boogie“–Q Tip
The Renaissance is one of my all-time favorite albums. I probably listen to it about once a week. Back when Q-Tip DJ’d at the Ace Hotel, I used to go all the time. The dance parties were so fun and everything he played was impossible NOT to dance to. This song always brings me back to those nights.

5) “Feelin’ Myself“–will.i.am and Miley Cyrus
In case you haven’t noticed, I’m basically still 16-years-old in my heart. I LOVE to dance and I don’t hold back, and this song has that whole, “I own this club and all eyes are on me” thing going on. There’s something about Miley that reminds me of myself at that age (minus the whole famous millionaire thing). She’s totally ridiculous, but in that way we all are/were when figuring out our identities. Also, this song always seems to hit during the shower portion of my morning routine, making for some awesome bathroom dancing.

6) “Super Rich Kids“–Frank Ocean
I went to a prep school on scholarship from 7th-12th grade. This song always makes me think of some of the kids I grew up around. So much excess, but so little happiness. I’m generally obsessed with Frank Ocean’s voice. Can’t get enough.

7) “Superpower“–Beyonce with Frank Ocean
Beyonce AND Frank Ocean? Together on one track? YES PLEASE.

8) “Bitch, Don’t Kill My Vibe“–Kendrick Lamar
I live and work in New York City. So many things kill my vibe regularly. This is how I always want to respond.

9) “Jesus Sex Symbol“–Brigitte
I spent a lot of time in Paris for work during the past year and discovered Brigitte while there. I bought their album and, of course, immediately went to the longest track. It runs at a length of 7:45, but has this upbeat gospel-ish start before it moves into a really sexy groove. Plus, I’m a total sucker for an epic track. “Hotel California,” “Champagne Supernova,” “Only in Dreams,” “A Day in the Life”–I love them all.

10) “Love Me or Hate Me“–Lady Sovereign
Didn’t see that one coming, did ya? I have no idea what happened to Lady Sovereign, but this song kind of exemplifies the way I’ve always approached life. You love me? Great. You hate me? That’s your problem.

Nick Dietz, a producer who lives in Fort Greene

1) “Velouria“–Pixies
Because the Pixies are awesome and every time I see that Apple commercial where they play “Gigantic,” I want to listen to them even more.

2) “Frail & Bedazzled“–The Smashing Pumpkins
I love the Pumpkins. This came on at a bar I was hanging out at on the LES and I immediately added it to my Spotify.

3) “The Position“–The Impossibles
A band that never got the recognition they deserved. One of my favorites of all time. They reunited to put out these two songs after a Kickstarter-like thing for it sold out in, like, two seconds. First new music from them in 12 years.

4) “Cut Me Some Slack“–Paul McCartney/Dave Grohl
I finally got around to watching the documentary Sound City. It was awesome. This song rocks. Plus, it’s Nirvana, but with Paul McCartney, what’s not to love?

5) “Invisible Touch“–Genesis
My friend in Florida has this on vinyl. And, we had a blast cranking this up and drunkenly dancing in his living room. Such a solid dance track.

6) “Talkin’ Like You (Two Tall Mountains)“–Connie Converse
This is my new favorite artist. I heard a beautiful voice coming out of the speakers in a Williamsburg coffee shop. Asked who it was, to which the barista enthusiastically replied “Connie Converse.” Connie’s story is fascinating. I love everything about her and her music. It’s a perfect record to put on first thing in the morning.

7) “The New Nathan Detroits“–Braid
Another band that didn’t get the credit they deserved. Killer drums/drummer/drumbeat. That whole album kicks ass. Plus, they’re back together, on tour, and have a new album coming out this year.

8) “Fat Bottomed Girls“–Queen
Because it rocks almost too hard. Plus, Queen is one of the best bands of all time and Freddie Mercury is the greatest rock singer of all time. Also, this is one of my karaoke go-to’s.

9) “Boogie Shoes“–KC & The Sunshine Band
This song is perfect to accentuate and/or create a good mood while walking down the streets of New York. It adds a dance-y air of confidence to every step I take.

10) “Agenda Suicide“–The Faint
A friend of mine brought them up the other day and I remembered that this song is totally bad ass. Actually, that whole album is solid.

Jason Persee, an editor who lives in Williamsburg

1) “Doomsday Machine” –Kadavar
The wife and I just got back from Austin Psych Fest, and this riff-damaged trio of hirsute Berliners was the most pleasant surprise of our entire weekend. This song, which seems to be about a really badass car, epitomizes their super-tight, back-to-basics sludge metal.

2) “Let’s Jump In“–Dead Meadow
Speaking of Austin Psych Fest, Dead Meadow played my favorite set this year and I’ve been listening to them obsessively since. “Let’s Jump In” sounds like Black Sabbath, but with more distortion pedals, 30% slower, and 100% more stoned.

3) “No One Else“–Weezer
Weezer’s “blue album” is celebrating its 20th anniversary this year, so I’ve been torturing myself with nostalgia. “No One Else” is pathologically catchy, and it may be the greatest (only?) pubescent-bubblegum-metal song ever.

4) “Dance“–ESG
They played this at my favorite restaurant a few months back, and all conversation came to an immediate halt. It was like the “Dry the Rain” scene in High Fidelity—a bunch of strangers simultaneously derailed by this insanely great piece of music.

5) “Oxygal“–Speedy Ortiz
Speedy Ortiz is a great way to simultaneously revisit the ’90s and reassure yourself that you listen to new bands. Sadie Dupuis sounds like a young Mary Timony, and “Oxygal” does that old Sonic Youth trick where the lead guitar plays along with the vocals, but the song came out in 2014 so you’re technically keeping relevant.

6) “Broken Wings“–Mr. Mister
Two separate friends with normally unimpeachable taste in music swore up and down that this was a great song to run to. So, despite their obvious insanity, I set skepticism aside and added this big ol’ slice of cheese to my playlist. It totally works. I have no explanation. You’ll just have to suspend disbelief on this one.

7) “Feel Good Hit of the Summer“–Queens of the Stone Age
Speaking of tracks for your running mix, it doesn’t get more inspiring than this fist-pumping ode to drug abuse. One little problem: halfway through you may become aware that you are sprinting as fast as you can and your heart is about to explode in your chest. Much like drugs, this song is a lot of fun until it kills you.

8) “Sunbathing Animal“–Parquet Courts
Parquet Courts are f**king amazing. In spirit, at least, they’re reminiscent of the sunnier side of SST Records (Minutemen, Meat Puppets), only faster and more instantly gratifying. I picked up this 7” on Record Store Day and it’s been in heavy rotation since, but honestly you can’t go wrong with anything these guys put out.

9) “Funnel of Love“–Wanda Jackson
Jim Jarmusch movies always have amazing music, and his new one, Only Lovers Left Alive, is no exception: a rendition of this Queen of Rockabilly classic opens the film. Jackson’s version was released in 1961, but the tremolo on the guitar gives it a snaky, psychedelic vibe that gets into your bones.

10) “Encrypted Bounce“–Thee Oh Sees
Thee Oh Sees’ usual fuzzed-out garage-psych gets a shot of the Stooges thanks to a driving beat and a tiny dose of baritone sax (but, thank god, no sax solos). The perfect soundtrack to a late-night drive down a haunted highway.