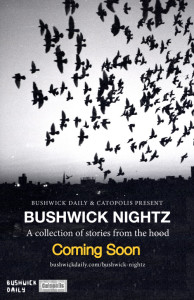 Whiskey shots, vegan empanadas, drugs and White Castle all show up in the pages of Bushwick Nightz, a new anthology that aims to map out and freeze-frame what the rapidly changing neighborhood means to its residents. Featuring stories by lifelong inhabitants as well as freshly arrived twenty-somethings, this collection doesn’t shy away from exploring gentrification, putting a wide variety of mostly fictional nights in Bushwick on display.

Published by Bushwick Daily in collaboration with local small press Catopolis, Bushwick Nightz is made up of 12 different stories, each acting as a window into a specific period of time, from a night to a lifetime, spent in Bushwick.

The collection pulls its title from a piece written by Catopolis’ own Dallas Athent. The opening story in the collection grabs the reader with statements that are at once poignant and humorous, interspersed with lines many of us have uttered at 2am. “I lived nightz of endless possibilities at the edge of a quiet desolate street and a train ride away, but always too far because rent’s always on the rise in this town,” says the narrator. “Fuck it I can’t comprehend getting on the L right now.”

Casual sex is a theme throughout, portrayed as something simply used to pass the time or misused in a search to find something deeper. It doesn’t do anything for the various characters who seek it out, their nightly plans and general attitudes reflecting a life willingly lived in the doldrums. They attend gallery shows and drink at bars that offer no excitement or intrigue, although they’re also aware that their lives in New York are the dreams of many, and once their own dreams. It is a pervading theme throughout the book, a lack-luster outlook on what you have, a feeling that there should be more.

A good example of this is the highly enjoyable story “Goodnight” by John Jarzemsky. The piece acts as a slice of life of a twenty- or thirty-something in Bushwick, an evening spent out and about in the trendy bars of the neighborhood. If you’re familiar with deep Bushwick you’ll appreciate the references to local dives like Gotham City Lounge and Bossa Nova Civic Club. The main character has a sort of sadness and resentment about him, a drifter mentality, the urge to keep going and keep drinking even though he is over the scene, a mix between wanting more and being too lazy and jaded to really give more. He narrates the evening with statements like:

“A girl in a ridiculous hat and dumpy high-waisted jeans tells me I look like Robin Thicke, and I try to give her an ingratiating smile, but I must not have good control over my facial muscles right now because her own smile goes sour and she goes back to talking gender politics with a six-foot-tall gay dude who weighs less than she does.”

He floats through the night meeting girls, playing drinking games, watching people do coke, hooking up. The whole time he is thinking about how badly he wants to eat some White Castle. Though in description he sounds repellant, in many ways he is a relatable character–an embodiment of someone who has lost the beat, with no real direction, sabotaging his chances at something greater by posting an Instagram of the girl he sleeps with, not caring whose house he sleeps at and how sad his early morning trip to eat fast food really is, all the while aware of his own failure to engage or connect.

Thankfully for the reader, sullen hipsters aren’t the only characters who populate the pages of Bushwick Nightz.

In “Finding My Way Back,” author Waldina Olivera discusses the true story of her time spent growing up in the neighborhood, as well as her departure and eventual return. “I was in love with my old neighborhood because it was tough and gritty but it wasn’t static–it was changing much like the people it had seen grow up,” she writes. “It was still a place for families, but also a place for bohemians, for students, New Yorkers and transplants.”

Bushwick Nightz also highlights the tension between the old and new. In “Reading While Standing, Reading While Walking,” author Prospero Vega takes a comical look at his neighbors who feel the need to showcase their love for big pretentious books.

“I’m talking about people who read while standing up for no God damned reason at all other than to make you aware of what they are reading. Less Than Zero, White Teeth, 2666 or The Vegan’s Guide to Avoiding Train Cars with Break-Dancers on the L Train.”