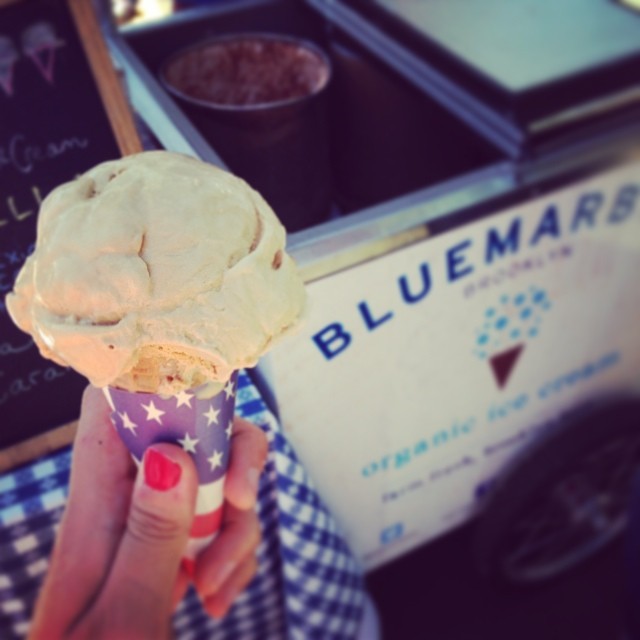 Local ice creamers are taking over at the Brooklyn Flea this weekend for its Annual Ice Cream Bonanza. Photo: Brooklyn Flea

Don’t let the weather and its overcast aspect get you down, there’s tons a of fun to be had this week. Our Total Greenpoint Immersion on Saturday is sold out, but even if you didn’t snag a ticket, come join us! You can still buy drinks and snack a la carte, and maybe a friend will share some of their walking around money with you. We’re skipping August, but will be back in September with another immersion in Bushwick, so get ready. If you missed your chance to celebrate Bastille Day with all the fuss over Germany earlier this week, don’t fret–Roebling Tea Room’s absolutely insane annual fete is Saturday night, from 6pm to 11:30pm. Last year there was a mime burlesque show. This year they promise effervescence, pigeon meat and duck parts, and they’re taking reservations for the occasion. Finally, Funny Story is back on Thursday night with a killer line-up including nerd-approved host of Ask Me Another, Ophira Eisenberg. Here are seven more events and tips from our editors and writers, to help you plan your ideal week.

Thursday, July 17: It’s only July, but tickets to two of BAM’s most anticipated pieces of fall programming are going on sale to the general public today—and if the presale response is any indicator, the window for scoring seats to the following events will be microscopic. The member’s only tickets to Lena Dunham’s sit down with Zadie Smith on Oct. 21 as part of BAM’s literary series Unbound have already sold out, but general-public tickets, which cost $38 and include a copy of Dunham’s first book, Not That Kind of Girl, go on sale today at 10am. Also at BAM this fall is Werner Herzog, the legendary German film director of such cinematic classics as Aguirre, Wrath of God, Fitzcarraldo and Grizzly Man. Herzog, who was nominated for an Academy Award for his documentary Encounters at the End of the World in 2007, is considered a master of his craft. He will discuss his 50-year career with Paul Holdengräber, the New York Public Library’s director of public programs, on Sept. 4. Tickets are $25.

Friday, July 18: Michael Jackson and Madonna still reign as the respective king and queen of pop, and with no successors in sight (no, not even Queen Bey no matter what TIME tries to tell us), tonight’s King & Queen of Pop Sing-A-Long at Union Hall sounds like a fitting way to pay homage to pop-culture royalty. Friday’s party is pretty black and white: come in costume ready to strike a pose and belt out some of the biggest hits from the ’80s and ’90s. The partygoers able to express themselves the best will win prizes for best costumes and/or voguing capabilities. Tickets are $10, and themed drinks for the night will include such concoctions as the Eva Perón, Dirty Diana, Erotica and Moonwalker—all of which are guaranteed to be nothing like a virgin.

Saturday, July 19: Mister Rogers Art Gallery and the Awesome Foundation are teaming up this Saturday to present an art installation that sounds like just the type of crazy, stupid fun worth skipping brunch for—OK, don’t skip brunch, but eat early because you’re going to want to check out Balloonacy when it opens to the public at 2pm. Attendees of the interactive balloon immersion will be invited in small groups to enter a dark room in the gallery a given a chance to dance around in a dark surrounded by over 2,000 LED-filled latex balloons. (If popping balloons freak you out, this is probably not the place for you.) Over 3,000 people showed up to the first Balloonacy in San Francisco, so make sure to RSVP for the Brooklyn event if you’re interested. Here’s a video of exactly what you’re in for should you attend.

Sunday, July 20: It’s been a big week for people who like ice cream here in Brooklyn, starting with the opening of Ample Hills new scoop shop in Gowanus and ending with this weekend’s Annual Ice Cream Bonanza at the Brooklyn Flea. In 1984 Ronald Reagan declared July 20 National Ice Cream Day, and this weekend, for the past three years, the Flea has been inviting local ice cream makers to celebrate by scooping out some of their most unusual flavors in Fort Greene and Williamsburg at their respective markets on Saturday and Sunday. With over a dozen ice creamers preparing over 50 flavors for this year’s event, we’re sure there’ll be something for everyone to scream about.

Monday, July 21: Mimi’s Hummus in Ditmas Park is making date night simple for us this week by offering to prepare picnic boxes built for two filled with the Mediterranean restaurant’s most popular dishes, as well as two craft beers from Market, the speciality beer store next door. Each box only costs $25 and comes with enough food to feed two adults. Lunch boxes (available 11:30am to 4pm) come with a sandwich, salad, bag of chips, pickles and beer for both of you, while the dinner picnics (available until 9:30pm) are filled with labne, hummus, megadara, beet salad, cauliflower salad, pita bread and beer. Mimi’s is four blocks from Prospect Park and offering its picnic deal through the end of summer. Boxes can be ordered at the restaurant or by calling 718-284-4444.

Tuesday, July 22: There are already plenty of titles on our summer reading list to keep us occupied until Labor Day, but, California, the debut novel by Edan Lepucki about post-apocalyptic living on the West Coast, is one we’ve added to the pile. Lepucki, whose short stories have appeared in McSweeny’s, is a staff writer for the The Millions. Her first foray into long-form fiction is a page turner that’s earned Lepucki praise for her imagination and ability to keep a reader rapt from the first page to the last. She’ll be in Brooklyn discussing her debut tonight at WORD Bookstore at 7pm.

Wednesday, July 23: If you’ve never been to a taping of Randy Cohen’s podcast, Person, Place, Thing, tonight’s taping at Brooklyn Historical Society looks especially good. Cohen, who you might recall as the writer of The Ethicist column for New York Times Magazine up until 2011, turned his attention to public radio and discovered that having prominent people talk about things that interest them other than themselves is wildly entertaining. This week he’ll interview Jonathan Ames, former Guggenheim fellow and author of several books, including The Extra Man, which was adapted into the HBO series Bored to Death.