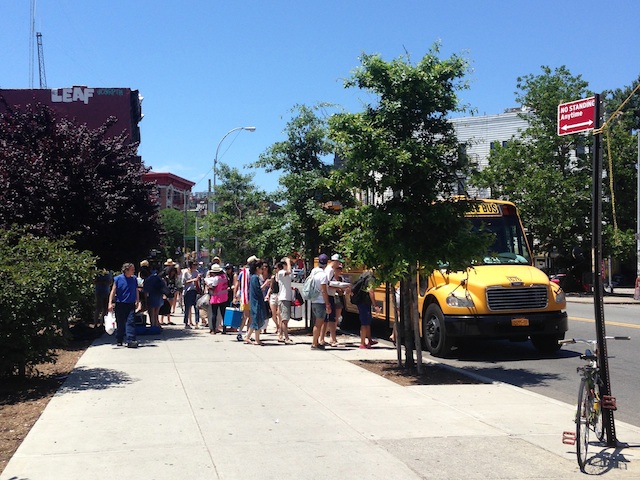 When we learned that Rockabus wouldn’t be making any trips to the beach this summer, we were decidedly bummed—riding a school bus to the Queens coastline with a cooler full of cold ones clamped between our knees was the most convenient way we’d come across to get to the Rockaways. We hear that Rockabus founders, Sam Morrill and Ryan Hefner, are working on a way to bring their shuttle-bus business back bigger and better than ever next year (the details of which we’ll make sure to fill you in on as they’re announced), but for now, here are three alternate options for getting from door to shore this summer that are fast, affordable and don’t require two subway transfers, a shuttle and a bus if your final destination happens to be Fort Tilden or Jacob Riis Park.

NYC Beach Bus
Formerly the Rockabus’ biggest rival, the NYC Beach Bus has emerged this summer as a reliable ride-share service making stops in the Rockaways at Beach 84 and at Jacob Riis Park on Saturdays and Sundays. Round trip tickets are $12 ($9 one way), there are two pickup points in Brooklyn: the Viva Movil store on Flatbush Avenue near the Barclays Center in downtown Brooklyn and in Williamsburg in front of the Capitol One Bank on Metropolitan Avenue. The first buses leave for the beach at 9:15am and they start making return trips beginning at 2:30pm. Here is a full schedule of arrivals and departures.

Alexis Van Lines
Known better as the guys with the white vans who like to listen to reggae music really loud, Alexis runs shuttle services to and from Bedford and N. 7th Street  or Grand Army Plaza to Rockaway Beach, Fort Tilden, Jacob Riis Park and Breezy Point on Saturdays and Sundays. Roundtrip rides are $12 (which seems to be the magic number for shuttle service this summer) and $6 one way—Alexis is also running a special, $10 roundtrip deal from Bedford to Breezy Point right now. Vans depart from Williamsburg or Prospect Heights once an hour from 10am to 4pm and start making hourly return trips from the beaches beginning at 4pm. The last bus back leaves at 9pm, which is later than either of the other ride-share services running trips to the Rockaways this summer.

Bushwick Beach Bus
North Brooklynites looking for a way to get to Rockaway Beach or Fort Tilden on the weekends can catch a ride on one of the shiny school buses that pick up beachgoers on Saturdays and Sundays from Pearl’s Social & Billy Club on St. Nicholas Avenue. The first bus from Bushwick departs at 10am and return trips from the Rockaways start at 3pm. Rides are $12 round trip or $8 one way. Each bus has room for 40 people, with 20 seats available for reservations until 8pm the night before and the other 20 seats saved for walk-up riders the day of. Check their site for the full schedule of arrival and departure times for a given weekend, as well as weather and cancellations updates, and to read about their beef with Alexis Van Lines. To reserve a spot on a shuttle, email
bushwickbeachbus@gmail.com.

All of the ride-share options above only operate on the weekends. If you’re looking for a faster way to reach the beach on weekdays and aren’t opposed to public transportation (so long as it’s easy), consider taking the Q or B train to Brighton Beach—Coney’s cleaner, quieter cousin. From Atlantic Terminal the B takes just 25 minutes to get to Brighton Beach, the Q slightly longer. You can also get off on the Sheepshead Bay stop and eat at Uma’s, an Uzbek restaurant that recently won praise from The New York Times. Or, if you’re more into the idea of sunbathing with a skyline and aren’t interested in swimming, the newly opened beach at Pier Four in Brooklyn Bridge Park is by far the closest, and quickest, way to get some sand between your toes.

Leave a Reply to Betty C