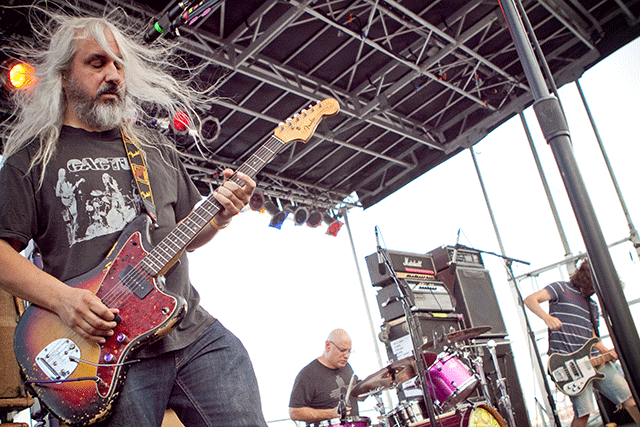 Free music is one of most redeeming qualities of the New York summer. In exchange for sweaty and pungent subway rides, and co-dependent relationships with our air conditioners, we are rewarded with free entertainment, in settings that, with a perfectly timed breeze, make us remember why we’re here in the first place. This year’s 4Knots Music Festival, the fourth (how’s that for symmetry?), was no exception.

Dinosaur Jr, after nearly 30 years together, are capable of out rocking bands half their age. My last encounter with J. Mascis, prior to his turning up at 4Knots on July 12, was at a college event where his backing band was a CD player, and I have to say, this was a major improvement. As the Peking tall ship where I stood watching moved slightly during The Wagon, they literally rocked the boat.

Speedy Ortiz was the only band whose music seemed to get lost in the river—as beautiful as many outdoor venues are, sometimes the music gets lost in them: the guitars not quite as sharp, the drums not as hard hitting. It’s a minor quibble though, for a band whose noisy pop and thoughtful lyrics were a welcome discovery.

I’d heard wild reports of Brooklyn’s Mac DeMarco’s live shows, including occasional nudity, but the antics are a sharp contrast to the languid loveliness of the music, full of shimmery guitars and a droll delivery—summer jams for those us who just want to slow down. Any anxiety over the aforementioned rumors of nakedness were quickly squelched. Everyone kept their clothes on.

Earlier, Those Darlins, combined girl group choruses with a punk attitude that lent itself equally well to a cover of The Crystals’ And Then He Kissed Me as it did to their own original sassy rockers like Screws Get Loose, which I’ve been humming to myself since, much to the annoyance of coworkers.

Music wasn’t the only attraction at this festival however. As endless fashion magazines remind us, festival fashion is a major marketing opportunity, and 4Knots provided a few opportunities to see these trends in their natural habitat. Last year it was babies in headphones more stylish than anything I was wearing that day. This year it was furry children instead of the human variety, whose accessory games remained strong despite the summer heat. On the actual festival goers themselves, I noticed lots of cut-off shorts paired with thigh-high tattoos, a pairing of leg muscles and bravery I can only dream of aspiring to.