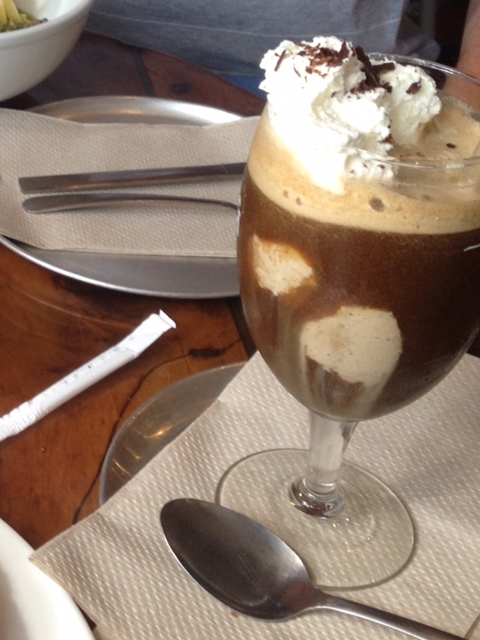 I went to college down South, and when it was hot (which was most of the time), my roommates and I used to make pitchers of mudslides from store-bought T.G.I.Friday’s mix, drink them in the afternoon on our porch, and think we had discovered ultimate bliss. Then again, we were also deeply invested in the interpersonal relationships on The Real World and considered our local Macaroni Grill to be fine dining. Times have changed, and frozen drinks took a major PR hit when cloying, pre-made, artificially-flavored syrups fell out of favor to make way for the current mixology trend, with its focus on high-end, exotic ingredients and silly, made-up words like “mixology.” Nowadays, outside of the occasional beachside piña colada or margarita, most discerning adults wouldn’t be caught dead with a frozen drink in hand.*

Cue the beer float.  A few summers ago while on a day trip to Beacon, New York, I happily polished off a Double Chocolate Float at The Hop, which is the sort of beer mecca that my boyfriend seems to have a knack for finding and adds to the itinerary of every excursion we take together. It’s increasingly clear that nothing can slow the craft beer industry’s roll right now, and amid the frenzy a handful of breweries have been developing chocolate stouts, so called because they are made with a darker malt that produces a subtle chocolate finish. As it turns out, a pint glass of this stuff with a scoop or two of ice cream added to the mix tastes pretty awesome, providing all of the rich, cold satisfaction that a mudslide would without the syrupy sweetness. Also, it couldn’t be easier to make at home: fill a glass partway with your favorite chocolate stout (I’m partial to Brooklyn Brewery’s Black Chocolate Stout), and then add a generous scoop of ice cream.  Note that it’s important to pour the beer first to avoid a foamy mess. Traditionalists might stick with vanilla or chocolate, but coffee ice cream takes this treat to a higher plateau, as does a sprinkling of grated dark chocolate on top.

Of course, there’s no requirement that you use chocolate stout, and you can still have someone else make you a beer float without having to enlist the services of Metro North. As of a few weeks ago, Uncle Barry’s bar on Fifth Avenue will be serving up $8 beer floats all summer long. You know Yuengling, that beer that everyone from Pennsylvania and southern Jersey is always pushing on you? Apparently, they also make ice cream, which started when the brewery needed to find new revenue streams during Prohibition. Uncle Barry’s is stocking the vanilla and espresso-chocolate chip varieties, and will gladly enhance your pint of Yuengling lager, Yuengling Black and Tan, or good old Guinness with a scoop of either flavor.

*Note that as much as I would like to include myself in this camp I cannot, because once on a particularly scorching Fourth of July, I ordered ribs at a chain BBQ place along with something called “Allota Colada” that most certainly involved Blue Curacao and came in a margarita glass that was bigger than my face and I drank the entire thing.