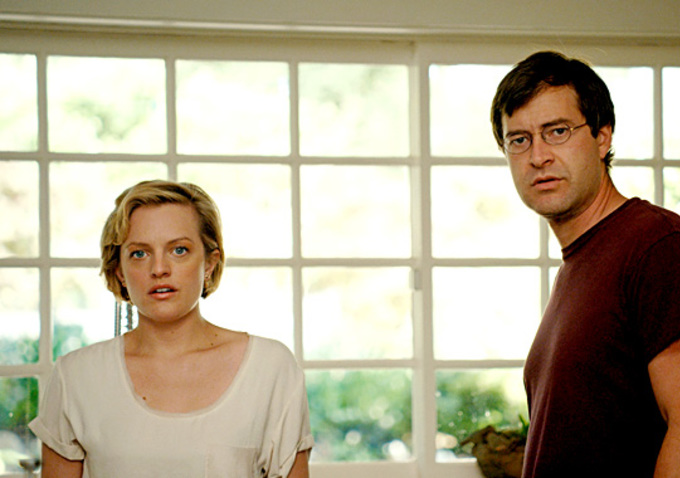 Catch a sneak preview of Chris McDowell’s anticipated directorial debut, The One I Love, starring Elisabeth Moss and Mark Duplass on Aug. 4 at Industry City, and stick around after the screening for a Q & A with the author-turned filmmaker and his cast  Photo: Radius TWC

August is already upon us, but despite all those automated vacation responders in your inbox and the slightly empty feeling around the city, there are still plenty of seasonal events for those of us left here in town to enjoy. For starters, we’ll be heading to Red Hook for a happy hour and beer tasting at the new brewery Kate Hooker clued us into earlier this week before hitting up Brooklyn Bowl for some surfer rock and a midnight dance party. While the weather is still nice, you’ll also find us at Industry City to take in an outdoor flick as part of Rooftop Films, which turns 18 this summer. Add in a pretty sweet pop-up shop, a photo exhibition that promises to play tricks on our eyes and a prix fixe dinner done right, and you’ve got your ideal week.

Thursday, July 31: VICE magazine’s 13th annual Photo Issue Exhibition, which opens today at Pioneer Works, will make you do a double take, as this year’s group show is based on illusion and features works of art intended to trick the eye. The term for this type of artistic deception is trompe l’oeil, which literally translates from French as “fools the eye.” Whether you make it down today, or sometime between now and Aug. 10 when the exhibition closes, it’s worth trekking to the waterfront to check out these images given the caliber of photographers who’ve contributed work—Weegee, Cindy Sherman, and Laurie Simmons among them.

Friday, Aug. 1: The waterfront between Red Hook and Carroll Gardens seems like the place to be this week, because in addition to the art show opening at Pioneer Works, we’ve recently come across a new craft brewery worth all the buzz it’s been receiving lately. Other Half might not be in the most picturesque of places—”smack between a scrap metal yard and a tired-looking McDonald’s drive-thru”—as our contributor Kate Hooker puts it, but their brews are gaining the admiration of some of the city’s most stellar suds houses, Double Windsor, Tørst and Greenwood Park to name a few. It’s open today from 5–10pm, making it the perfect destination for a TGIF beer tasting.

Saturday, Aug. 2: There is plenty of live music to keep you going during the next couple of hot summer weeks, starting with “The King of the Surf Guitar” Dick Dale at Brooklyn Bowl on tonight, with a midnight after party featuring DJ Josh Styles (Daddy Long Legs) and dancing from Anna Copa Cabanna. Want to know who else has sets in the city this week? Check our Jay Honstetter’s roundup of some of the best gigs going on in BK between now and Aug. 9.

Sunday, Aug. 3: Without a doubt, you will find us in Williamsburg this weekend for the La Selva pop-up inside Antoinette on Grand Street to grab some of Celina Paiz’s new one-of-a-kind designs. Paiz creates women’s wear from a combination of heirloom Guatemalan textiles and contemporary fabrics. She nails it with these smock dresses, and her other looks are equally as impressive. Stop in anytime today from noon to 7pm to talk to Paiz in person and pick out a new addition to your wardrobe. Better still, Paiz is offering a 10% discount on all purchases made at the pop up, and part of all her proceeds go to the the Museo Ixchel del Traje Indígena, Guatemala’s national textile museum.

Monday, Aug. 4: It’s hard to believe that Rooftop Films turns 18 this summer, particularly because the outdoor film series still finds ways to engage an audience almost two decades in. This Monday, head to Industry City in Sunset Park for a sneak preview of The One I Love (which doesn’t arrive in theaters until Aug. 22). Elisabeth Moss (Mad Men) stars in this Sundance darling as one half of a married couple on the brink of breaking up. A weekend trip away intended to rekindle their romance only leads the pair into a more bizarre set of muddled circumstances. Moss, her co-star Mark Duplass and director Charlie McDowell will all be on hand after the film for a Q & A. Doors open at 8pm, and tickets are $13 and available here.

Tuesday, Aug. 5: Applewood, which is coming upon its 10th anniversary this September, is a mainstay of the farm-to-table food scene, and it’s a classic for a good reason. Laura and David Shea actually own and work on the upstate farm that supplies their South Slope restaurant with much of its produce, and Mondays through Thursdays they offer a substantial $30, three-course tasting menu that incorporates fresh ingredients from their organic farm, like a perfectly poached applewood egg atop roasted delicata squash, drizzled with a maple gastrique. Check out all their creative pairings on the Applewood menu, which changes daily, and don’t be afraid to add wine or beer to the meal—you’ll still walk out for less than $50 a head.

Wednesday, Aug. 6: Elizabeth Gaffney, editor-at-large for the literary and culture magazine, A Public Space, launches her sophomore novel, When the World was Young, tonight at Greenlight Bookstore. Gaffney, whose family has lived in the same Brooklyn brownstone for generations, mined some of her memories growing up here in the borough for her new book about a female misfit being raised in her grandparents’ brownstone in the years prior to World War II under the not-so-watchful eye of her unstable mother. Gaffney will discuss her immersive tale about mothers and daughters with fellow Brooklyn author Susan Choi tonight at 7:30pm.