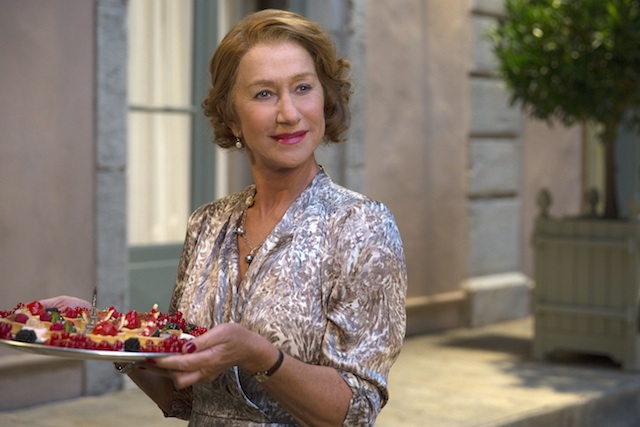 Last week, I saw an advance screening of The Hundred-Foot Journey, a new movie with Helen Mirren and Om Puri that opens today, and I have to confess that I’ve been dragging my feet on writing the review.  I definitely didn’t hate it—really, it’s tough for me to completely dump on a feel-good romcom about a talented (and, incidentally, extremely attractive) chef who moves from Mumbai to the French countryside and feverishly dedicates himself to infusing the rigid, traditional cuisine of his new home with the loud and bright flavors of his culture while simultaneously wooing the beautiful girl/fellow chef-next-door.

The problem is that I wanted to like it (Helen Mirren as the stodgy battleax with a sharp tongue and a soft underbelly! Long, sweeping shots of sunsets in the South of France and good-looking people cooking amazing-looking food!) a lot more than I actually did. It’s just impossible to be entirely generous about a film that relies as heavily on stock characters, brazenly obvious foreshadowing, and an intransigent belief that cheesy plotlines and dialogue will be forgiven by simply training the camera on Helen Mirren, sunsets in the South of France, or good-looking people cooking amazing-looking food as this one does.

In today’s New York Times review, A.O. Scott complains that The Hundred-Foot Journey would be much better if it “were really interested in food, culture, ambition, family or any other themes it reduces to slogans and clichés,” but fails because it “is so systematically wrong about all of these things as to seem actively dishonest.” I’m not sure I’d go that far. It’s true that the main character, Hassan, and his family are driven out of India by supporters of some nebulous political ideology and are then subjected to overt xenophobia and racism upon their arrival in France, and that the introduction and resolution of these plot contrivances is so superficial and oversimplified that the film risks insulting its audience.

On the other hand, anyone who is looking to a PG-rated Disney movie for a nuanced and thought-provoking discussion of geopolitics and race relations is probably not new to being disappointed. This is pure escapism, designed for people who, like me, can tolerate a little predictability and phony optimism in their movies every once in a while. If you liked Under the Tuscan Sun or Chocolat, you’ll find things to savor here. If you’re going to be enraged when you realize that you can tell exactly what it going to happen in The Hundred-Foot Journey, down to the smallest plot points, within the first half an hour, you should probably stick with Boyhood.