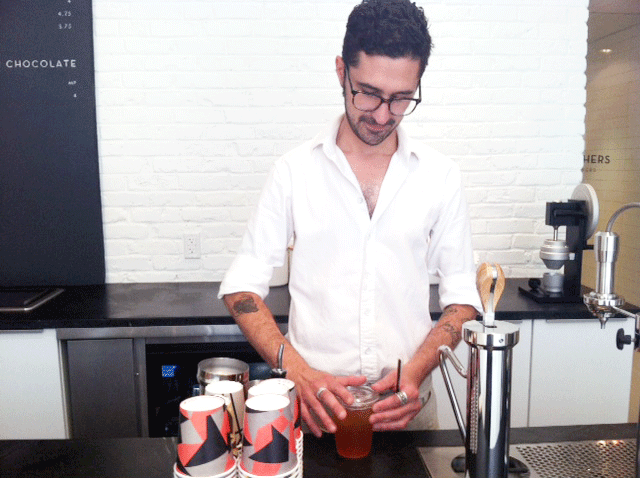 This may be the coldest summer in over a decade, but we’re still in the thick of iced coffee season. As you savor the last few weeks of summer, here are three new takes on classic cold brew coffee, our favorite style of caffeine on the rocks.

Chocolate Cold Brew
Rick and Michael Mast, the confectionary focused siblings behind Mast Brothers Chocolate, recently solidified their position as the Willy Wonkas of Williamsburg by opening their first Brew Bar, a watering hole devoted to drinkable chocolate—including a chocolate cold brew. The brothers Mast announced the opening of their new enterprise on Aug. 7, calling it the world’s first chocolate brew bar. Given the seriousness with which this duo approaches its dark-chocolate bar business, one would assume that’s not a superlative they’re throwing around lightly. Brew Bar’s menu includes standard drinks like chocolate milk, as well as more obscure offerings like chocolate soda, and finally, the focal point for this piece, a chocolate cold brew. Unlike the traditional concept of the cold brew, this one does not come with coffee. Instead, it’s more akin to an iced tea. Cocoa nibs are soaked in filtered water for 24 hours to create this bittersweet drink, which can be served alone, with simple syrup or a splash of milk. Just FYI, if you’re looking for a morning jolt, you might want to look elsewhere—cold brew chocolate does naturally contain caffeine but not as much as coffee or tea.
Brew Bar, 105A N. 3rd Street, Williamsburg

Iced Coconut Water Americano
While the health and hydration benefits of coconut water are still open for debate, it does have a distinct flavor. Subtly tropical on the tastebuds, the baristas over at Cup in Greenpoint and East Williamsburg have been using it to infuse a bit of exoticism into their iced Americanos. Don’t be fooled: coconut water isn’t going to rehydrate you any better on a hot summer day than regular water—a recent study found them to be about even in that area—but it does add a certain amount of sweetness and a flavor profile all its own. (You could also try this at home, and use coconut water in place of plain old H20 in your own cold brew.)
Cup, 79 Norman Ave. (between Lorimer St. & Manhattan Aves.), Greenpoint, 646-265-6494, and at 221 Montrose Ave. (between Humboldt St. and Bushwick Ave.), East Williamsburg

Cold-Brew Sachets
If you though sachets were just a fancy way of keeping your underwear drawer smelling nice, please allow us to introduce you to the concept of the cold-brew sachet. For the days when even the thought of caffeine isn’t enough to make you consider leaving your air- conditioned apartment for a coffee fix, Grady’s has got you covered. Not only does the Brooklyn company hand-bottle take home versions of its New-Orleans-style cold brew for you to keep in the refrigerator, it also makes something called a Bean Bag, which allows you to make your own iced coffee on the go. Product-name puns aside, each of these cold-brew sachets contains Grady’s signature mix of ground coffee beans, chicory and spices. Sold by the can, which contains four sachets, each bean bag creates 2.5 servings of cold-brew concentrate (10 ounces total give or take). While Grady’s Bean Bags as most easily located online through its own website, we also found them available through on-demand grocers like Good Egg and local markets (a full list of Brooklyn stockists can be found here). Each can costs $12, or roughly the price of three cold brews at your local coffee shop. These are practically made for scenarios in which your access to good coffee is uncertai—think Airbnb rentals or your parents’ house.