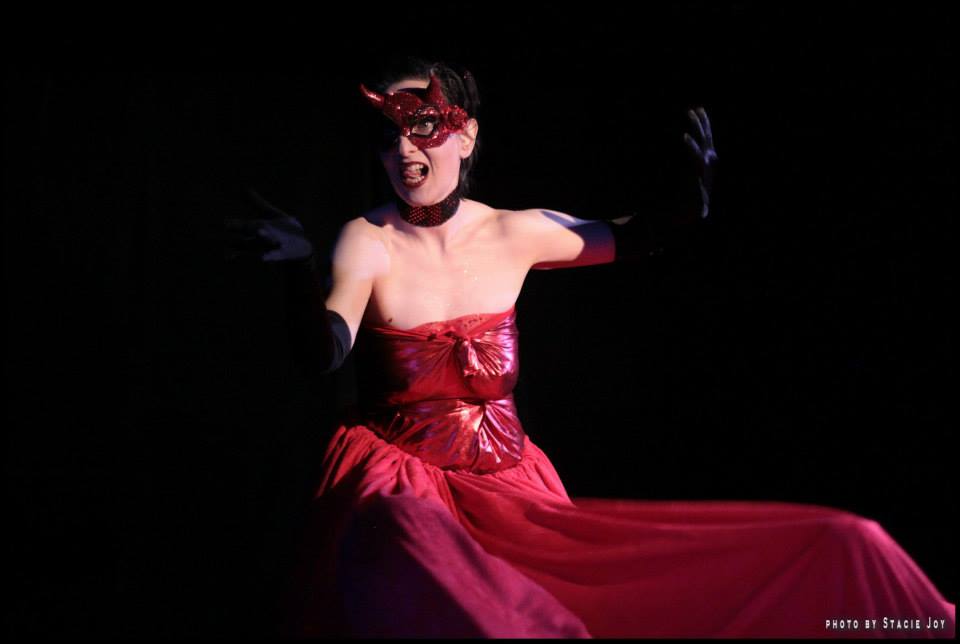 Some of the best queens and kings from Bushwick’s drag scene, including JZ Bich above, will perform at Bizarre bar on Aug. 20 as part of Crimson Kitty’s SWITCH! A Gender Bending Spectacular! Photo: Stacie Joy

Labor Day is only a couple weeks away, but summer isn’t ready for a swan song just yet. While lots of the seasonal programming like waterfront film screenings and fireworks displays are winding down for the year, there are still opportunities to take in both types of outdoor activities this week. There’s also a sideshow and a drag show we think you should see, as well as a literary talk between Matthew Thomas and Joshua Ferris we promise is worth the trip to SoHo. How’s that for your ideal week?

Thursday, Aug. 14: Make a move down to Brooklyn Bridge Park tonight for Syfy Movies With a View and catch Jim Jarmusch’s hip-hop samurai mash-up Ghost Dog: The Way of the Samurai–which has a soundtrack written and produced by the RZA and will basically be like pre-gaming for the upcoming Wu-Tang album. Or, if you’re looking for a weekend flick, when Saturday rolls in, you can spend the day tanning, swimming and doing your beach thing until the sun goes down then hit up the Rockaway Beach Surf Club for the first film festival devoted to female surfers.

Friday, Aug. 15: If you haven’t made it down to Coney Island for Friday night fireworks on the beach yet this summer, you have until Aug. 27 to do so, though we recommend hitting the boardwalk tonight by 9:30pm to take in the pyrotechnics, as it’s one of the last few Fridays this summer when you can also see the Coney Island Sideshow. If you lament the loss of a lot of what makes New York City weird, this is the perfect pick-me-up. Sideshows by the Seashore is one of the few remaining venues in the U.S. for this type of 10-in-1 circus act.  Tickets are $10 and the show starts at 8pm.

Saturday, Aug. 16: Get tickets to this Saturday’s first annual Level BBQ while you still can. The daytime party takes place in an unannounced location in Bushwick–partygoers will get directions to when they purchase tickets. The festivities include a DJ set from A/Jus/Ted, the duo of Justin Strauss and Teddy Stuart, who kicked off MoMA PS1’s Warm Up summer concert series back in June (you can check out their spinning styles here). There will also be a pig roast and plenty of tacos. Party starts at 3pm and tickets are $10.

Sunday, Aug. 17: While you’re spending your Sunday doing the usual things like brunching and trying to kill it at the Sunday Times crossword puzzle–thank you Elizabeth Gorski for making us flex our mental muscles–make sure to take some time to reserve tickets to the second annual Brooklyn Comedy Festival, which starts on Monday. For its second year, the festival is incorporating more neighborhoods and bigger venues, which means more opportunities to take in the hilarious people it has in its line up this year like Michael Che, Lucas Bros, Ted Alexandro, Jermaine Fowler, Mark Normand, Sean Patton and Sasheer Zamata. You can find a full schedule here. The festival runs through Aug. 24.

Monday, Aug. 18: I’ve been attending Creative Mornings for a couple years now, since interviewing founder Tina Roth Eisenberg in 2012. By far this free breakfast lecture series is my favorite monthly creative talk, and I’m not alone. Even though it takes place on Friday morning, Aug. 22, tickets typically sell out within minutes of going up online—which happens today at 11am. Start practicing your quick click and snag yours today because this month’s talk is all about a topic any creative type can relate to—failure. The discussion is taking place in Dumbo and the speaker is Ben Pieratt, the brand and product designer behind Svpply, which he sold to eBay in 2012. If Pieratt’s insight isn’t enough to get you out of bed at 8:30am on a Friday, did I mention the part about free coffee and pastries? –Jordan Galloway

Tuesday, Aug. 19: Make your way to McNally Jackson in SoHo tonight to hear Matthew Thomas discuss his new book, We Are Not Ourselves, with fellow author Joshua Ferris–Ferris’ latest novel, To Rise Again at a Decent Hour made the longlist for the 2014 Man Booker Prize. The two will be talking about Thomas’ fictional tale about a family of Irish immigrants in Jackson Heights chasing the American dream in mid-20th-century New York City. Their social climbing doesn’t come without costs. Thomas captures the golden age of American history post WWII with great detail. Talk starts at 7pm.

Wednesday, Aug. 20: Crimson Kitty has created quite a name for herself within the north Brooklyn drag scene. If you’re unfamiliar with the performance artist, here’s a pretty comprehensive Q & A with her on the Huffington Post. This Wednesday Kitty is presenting SWITCH! A Gender Bending Spectacular at Bizarre in Bushwick. The one-night-only event will include performances by five drag queens and kings as well as burlesque performers. All we can say about this one is expect the unexpected, because as Crimson Kitty says, “anything goes,” in Brooklyn’s no-holds-barred drag scene. The show starts at 10pm and the cover is $7.