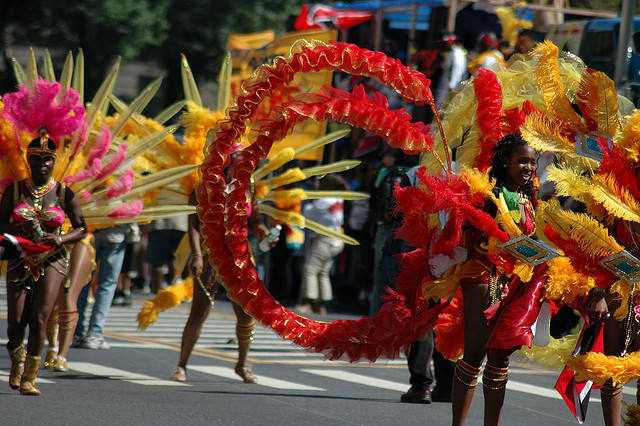 Brooklyn Carnival, one of the largest Diaspora celebrations of West Indian culture in the world, will take place Sept. 1 in Crown Heights. Photo: George Krauss

In many ways, September always feels like the start of a new year. So much cultural programming kicks off come Labor Day that we found ourselves flush with fun things to look forward to over the next week and well into fall–make sure to look out for our September Fun Map in your inbox tomorrow. While there will be plenty of time to celebrate summer over the long weekend ahead with backyard BBQs and beach trips, we would also like to direct your attention to a Michael Jackson karaoke party at Morbid Anatomy Museum, Brooklyn Carnival, a vampire film screening for anyone going through withdrawal following True Blood‘s series finale last Sunday, and a rooftop dinner in honor of the autumnal harvest we’re all about to reap. Your ideal week awaits.

Thursday, Aug. 28: Greenlight Bookstore has struck up a new literary partnership with culinary newcomer Peck’s Specialty Food, owner Theo Pecks’ iteration of an old-school kosher deli, which Brendan Spiegel clued us in on when it opened in Clinton Hill in January. The fruit of this new fusion is Book/Plate, a literary dinner party that pairs the works of authors with food dishes inspired by their writings. First up will be Francisco Goldman (Say Her Name) whose newest book, The Interior Circuit, a genre-bending book the follows Goldman through his grief after his wife’s passing as he rediscovers himself and his life inside Mexico City during the Mexican capital’s most recent time of socio-political upheaval. Tickets to the family-style dinner cost $45 and include a copy of Goldman’s book.

Friday, Aug. 29: Tonight the Morbid Anatomy Museum is throwing a karaoke birthday party for Michael Jackson. Let that thought sink in as you’re clicking over for tickets, because the oversized-curio-cabinet of an institution is going all out for the Gloved One. Along with a mic and karaoke machine, the museum has also organized gin cocktails, music videos and an illustrated talk by Shannon Taggart on “the curious afterlife of Michael Jackson.” Oddities start at 8pm.

Saturday, Aug. 30: Werner Herzog seems to be everywhere right now. The famed German filmmaker will be in conversation with Paul Holdengräber, the New York Public Library’s director of public programs, next week at BAM, and this past weekend Brain Pickings published an excellent piece on his creative process. If you’ve yet to take in one of Herzog’s many celebrated pieces of cinema, Nitehawk is screening a Herzog classic, Nosferatu the Vampyre (1979), tonight at midnight that we recommend checking out. Just be prepared to sleep with the lights on if you do.

Sunday, Aug. 31: This weekend kicks off the fourth annual Communal Spaces Festival, which contrary to what its name might imply, has nothing to do with celebrating the overcrowded living conditions of twenty-somethings in Bushwick. The festival is actually devoted to outdoor theatre, something we’ve come to appreciate about Brooklyn this summer. Starting at 1pm today, eight one-act plays will be performed inside community gardens in Bed-Stuy and Clinton Hill. You can check out a map of all the performances locations here, all of which are in walking distance of one another. Each play is about 30 minutes long, which ensures you can appreciate some art and still have time to brunch. You can find a full list of plays and performance times here.

Monday, Sept. 1: Those unfamiliar with the history, costumery and celebratory spirit of Caribbean Carnival should head to Crown Heights today to dance to the rhythms of the steel drum bands as the annual West Indian Day Parade winds and grinds its way to Eastern Parkway. Though, if you really want to feel like you’re in Trinidad (and don’t mind being pelted with paint), be at Grand Army Plaza by 3am for J’Ouvert, the pre-dawn street party also known as dirty mass that features music, dancing and midnight mischief.

Tuesday, Sept. 2: Kate Hooker is our go-to source for comedy events in BK. She has yet to let us down in the laughter department, so when she tells us to add Mortified to our social calendar, we’re inclined to fork over the $15 it will cost to hear grown adults relive some of the funniest moments of their teenage angst—their first kiss, first puff, worst prom, fights with mom, life at bible camp, worst hand job, best mall job, and reasons they deserved to marry Jon Bon Jovi–tonight at Littlefield.

Wednesday, Sept. 3: Autumn’s harvest is almost here, and Brooklyn Grange is inviting us all to partake in its seasonal bounty by hosting Veggiepalooza, a special dinner party taking place at its rooftop farm in the Brooklyn Navy Yard. Guests will get a chance to watch the sun set while enjoying dishes from five of the farm’s favorite chefs prepared with its rooftop crops. For $85, you’ll get to taste farm-fresh veggie dishes created by Pickle Shack, Scratchbread, VSpot and Northeast Kingdom, which are being paired with infused ice teas, cocktails, wine and beer. Sounds like the perfect way to toast a beautiful summer.