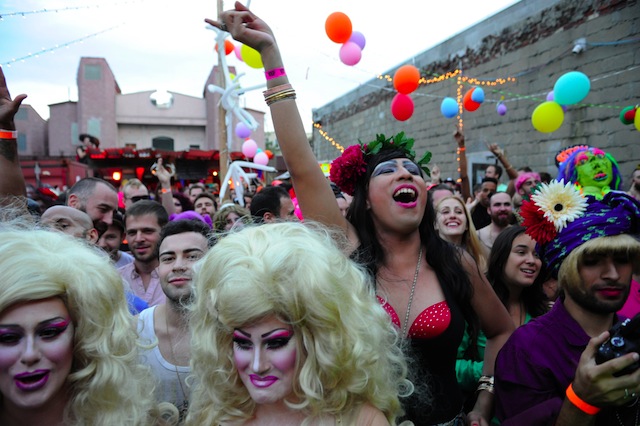 How it is possible for the first week of September to be hotter than our entire summer is a mystery of climate change, but somehow it’s fitting. Yes, technically we should be moving on to a productive, packed fall, but it’s hard to break from our hedonistic August ways, so why rush into anything? Tonight there are still tickets left for Veggipalooza atop the Brooklyn Grange Navy Yard farm, or for something more beefy, it’s steak night at Meat Hook Sandwich—$25 gets you steak, sides (we hear there’s fried calamari on the menu tonight) and unlimited cans of beer. Steaks start coming off the grill around 6pm. Tomorrow, grilled cheese sandwiches will literally float down from the sky outside The Diamond, and the weekend is packed with art openings, frozen drinks, and drag queens. Come Monday, anyone in walking distance of Black Forest Brooklyn should perk up their commute with a free coffee between 7 and 9am, which they’re serving all week to celebrate their new breakfast hours. Not in your neck of the woods? Here are seven more ways to take the edge off your summer hangover.

Thursday, Sept. 4: If the word Carcosa sounds familiar to you, chances are you’re a True Detective fan who got caught up in the HBO show’s haunting mythology, much of which hinged upon an ancient, mysterious place first mentioned in an Ambrose Bierce story, which then later resurfaced in an 1895 collection of horror stories by Robert W. Chambers, The King in Yellow, before Matthew McConaughey resuscitated this rabbit hole of references last fall. This fictional place has worked its magic on everyone from Raymond Chandler to True Detective writer Nic Pizzolatto, and now Masters Projects in Dumbo has chosen the cursed city as the theme for its inaugural exhibit, featuring street art, sculpture and other media from 20+ artists. It’s an alluring topic for a group show, and it’s just one of many to see during Dumbo’s monthly First Thursday art crawls.

Friday, Sept. 5: You made it to Friday, and it’s still hot out. You deserve an adult beverage, or better yet, a grown-up frozen drink. At Ramona in Greenpoint, whose generous happy hour from 5 to 8pm includes 2 for 1 specials on all beer and wine, $6 Sazeracs and Old Fashioneds, and $8 margaritas, they concoct two frozen drinks—a Gin Fizz Creamsicle, which tastes just like the popsicle of your childhood, and a peppery Moscow Mule, for those who don’t like their slushies cloyingly sweet. Williamsburg’s Donna is a similarly gorgeous cocktail palace where they serve a more sophisticated piña colada made with Branca Menta that will provide that same, TGIF vibe.

Saturday, Sept. 6: Pig Island, a massive BBQ featuring 20+ NYC chefs cooking up 80 hogs, is not the only reason to visit Red Hook this weekend. Photographer Stephen Mallon, who specializes in arresting maritime scenes and feats of engineering, like the recovery of Flight 1549, the plane Sully Sullenberger III emergency landed on the Hudson River, has had a show at the Waterfront Museum since late July. The historic barge will be Mallon’s floating gallery until Oct. 18, but the artist reception is this Saturday from 2 to 4pm, with light bites from Naturally Delicious. His work will be on sale and a portion of the proceeds will benefit the Waterfront Museum.

Sunday, Sept. 7: Bushwig, the biggest party of the year for drag queens and their admirers, has grown into a two-day affair this year, with dozens of performers, DJs, and live music outdoors at Secret Project Robot Saturday and Sunday. North Brooklyn has become the epicenter for NYC drag culture and this penultimate event showcases the full spectrum of drag performers, with more of an emphasis on art than pageantry. On Sunday, you’ll catch legends like performance artist Penny Arcade and staples of the Brooklyn drag scene like Macy Rodman and Scarlet Envy. Tickets are $20 for a single day, $30 for the weekend.

Monday, Sept. 8: Between Jenny Slate’s Obvious Child and the Julia Stiles’ Phoenix, this seems to be the summer of films and plays about abortion. While these two depictions have been on the lighter side, 21-year-old Brooklyn playwright Ruby Rae Spiegel approaches the subject through a darker lens. Her new play, Dry Land, was inspired by a New Republic article on DIY abortions, something one of her characters chooses to do given her options as a high-schooler in Florida. Workshopped at conferences this summer, alongside talent like David Lindsay-Abaire, early performances have had a lasting impact on audiences (one woman actually fainted). It opens at HERE in the South Village this weekend, with performances through Sept. 27, including Mondays. Tickets are $18.

Tuesday, Sept. 9: Take a moment, or all of NYC Honey Week, to appreciate apis mellifera–the humble honey bee. Starting today, apiaries around the city will open for tours, RSVP with individual beekeepers to save yourself a sweet spot. If you’re more interested in tasting honeys than in hanging with bees, check out the Queen Bee Cocktail Classic at New York Distilling on Monday, with honeyed cocktails and small bites, or Honey Fest 2014 in the Rockaways on Saturday.

Wednesday, Sept: 10: Few music critics will ever achieve the notoriety of Greil Marcus, the first reviews editor for Rolling Stone and godfather of modern rock criticism. But Sasha Frere-Jones, pop critic and profiler for The New Yorker, already stands out as another master of music writing, and the two will be in conversation Wednesday night about Marcus’s new book, The History of Rock ‘n’ Roll in Ten Songs, a handpicked selection that eschews the iconic musicians you’d expect in favor of more eclectic picks like “Transmission” by Joy Division. Tickets to the Brooklyn Voices event include a copy of the book, and local band The Brooklyn What will perform excerpts of each song throughout the evening at St. Joseph’s College.