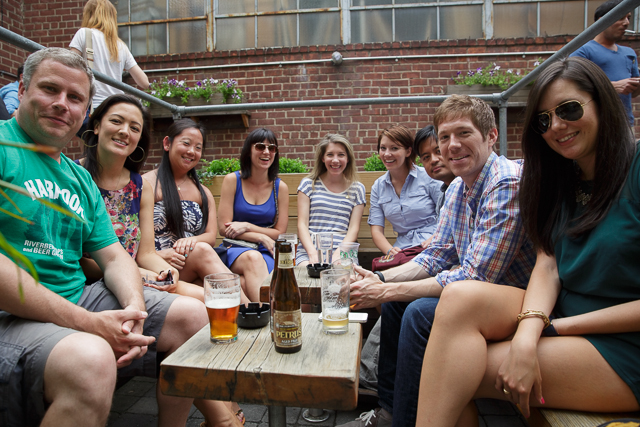 Spend the day drinking with us, and your favorite group of friends, during the Total Bushwick Immersion. Photo: Alison Brockhouse

So many festivals, so little time. The Beat Festival kicks off tomorrow with site-specific shows throughout Brooklyn, like a dance performance that takes its audience on an evening tour of Green-Wood Cemetery. Lovers of Nordic food will want to dig into The North Festival, which brings Scandinavian cooking demos and dinners to New York, including a beer-paired dinner at Brooklyn Brewery (get 30% off tickets with the code BROOKLYN at purchase). Nonesuch Records at BAM , a celebration of the adventurous music label’s 50th year, is also underway, and tickets for the Escape Music Fest, coming to Red Hook in October and featuring Yeasayer and Girl Talk, are on sale now.(Speaking of tickets, have you gotten yours for the Eugene Mirman Comedy Fest yet?) It’s not just festivals on the horizon—the week to come is full of big anniversaries, launch parties, even the start of a revolution.

Thursday, Sept. 11: Feminism, a movement prone to reinterpretation, is getting a reboot tonight at the opening of the Future Feminism exhibition and performance series on the Bowery. Five musicians and artists, including Sierra and Bianca Casady of CocoRosie and Antony of Antony and the Johnsons, have created 13 tenets of a new feminist manifesto; each is engraved on one of 13 rose quartz slabs to be revealed over the course of the next two weeks by an impressive roster of talented women including Kiki Smith, Laurie Anderson and Marina Abramović. The gist goes something like this: To end violence against women, protect the planet, and stop wars around the world, we need to embrace a feminine way of thinking—the future is female.

Friday, Sept. 12: All weekend long, Northside Media is serving up a feast of food-obsessed discussions with restaurant critics, food entrepreneurs and chefs, called Taste Talks. You can get single tickets or a festival pass to hear the editors of Bon Appetit and Food & Wine consider their future, Sam Sifton advise food bloggers on how to review a restaurant, or Andy Ricker of PokPok NYC and the Franks of Frankies weigh in on whether the Brooklyn food scene is too hot for newcomers. Interspersed with the panels are delicious brunches, BBQs and dinners, like tonight’s Mother-of-Pearl dinner, which begins with oysters and cocktails, and segues into a multi-course meal prepared by top chefs from Reynard, Brucie, Navy, and more. Tickets are $90.  (And if the foodie frenzy turns your stomach, head north to Greenpoint and attend the Garden to Table dinner at the 61 Franklin Street Community Garden instead—proceeds from the $40 ticket, $50 with drinks, go to support the Greenpoint Church Soup Kitchen.)

Saturday, Sept. 13: Take your Saturday and turn it into an excellent day of drinking during the Total Bushwick Immersion. A mere $20 will buy you a Brooklyn beer at four bars—Brooklyn Fireproof, The Rookery, Three Diamond Door and Radio Bushwick—plus lunch at either Brooklyn Fireproof or The Diggs, along with a wad of deals, from $3 cans of Brooklyn Lager at Cobra Club, to up to 25% off everything from clothes to haircuts. A lot of the deals last till the end of the year, so it’s like the bar crawl that keeps on giving. Get your tickets here.

Sunday, Sept. 14: For 10 years, Brooklyn photographer Rachel Sussman gave herself a fascinating assignment, to capture living organisms around the world that were at least 2,000 years old. The project led her to dive off the coast of Spain to photograph 100,000-year-old sea grass, to the Mojave desert for a picture of 12,000-year-old yucca plants, and to Greenland for an image of 3,000-year-old lichen, which grows one centimeter every century–slower than continental drift. The images were collected in a book, The Oldest Living Things in the World, and she will be showing her first major exhibition of photographs from the project at Pioneer Works through Nov. 16. The opening is on Saturday, but if you come Sunday between 5 and 10pm, you’ll also catch jazz and blues performances during the art center’s Second Sunday series, with Hazmat Modine, who backed Natalie Merchant on her latest album, and roots-soul singer Martha Redbone.

Monday, Sept. 15: Over the past 10 years, Brooklyn-based literary magazine n+1 has fostered the careers of sharp writers like Chad Harbach, Keith Gessen, and Benjamin Kunkel, and brought us wryly written, original reporting, from a series of interviews with an Anonymous Hedge Fund Manager, who helped break down the 2008 economic meltdown, to this sociological examination of the hipster.  If you’ve never been a subscriber but still count yourself as an admirer, there’s now an anthology that captures the best of the journal over the last decade. BookCourt hosts the launch of Happiness: 10 Years of n+1, tonight.

Tuesday, Sept. 16: Pierogi Gallery, a pioneer of North Brooklyn’s art scene, is another Brooklyn institution celebrating a major milestone right now. To honor 20 years in the neighborhood, the Williamsburg gallery is exhibiting a group show of their artists in their main space, and holding a special edition of their annual race of artist-made cars at their warehouse-y outpost, The Boiler. All cars are made using the Cub Scouts Official Grand Prix Pinewood Derby Kit and the races, which start tonight at 7pm and continue each night until the final race on Friday, follow Cub Scout rules for the most part (we’re pretty sure the “What Were You Thinking?” award is a new addition).

Wednesday, Sept. 17: Brooklyn electronic rockers Bear in Heaven have a new, moodier album out, Time is Over One Day Old, filled with their signature lush, textured sounds, which their live shows only intensify. David Chiu, who profiled the band, asked guitarist/basssit Adam Willis what it’s like to translate their ornate and textured music to the stage, and Willis said that the sound is twice as big. “We really put a lot of effort into our live shows and it takes a lot of technical hurdles to pull it off. We put on a good live show.” Check out their hard work at one of their homecoming shows tonight at Music Hall of Williamsburg. Tickets are $15 in advance.