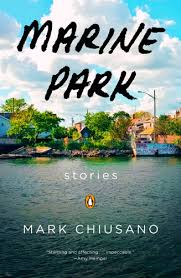 There’s something I’ve always found vaguely unsatisfying about short story collections, even by authors I adore. The luxury of a novel, for me, is to sink into a fictional world for an extended period of time and to fall in love with the characters I meet there. Short stories don’t allow enough time for that, and as an editor with a constant backlog of articles to read and assign and a million other publications to keep up with, their format makes me feel like I’m working, not escaping.

None of those things are true about Marine Park, the astonishingly good collection of short stories from Brooklyn native, Mark Chiusano.

Rather than a group of disconnected narratives, Marine Park feels like you’re reading an experimental version of the Great American Novel–like the slim volume was once an 800-page behemoth that has been cut down to its elemental moments. The stories are largely set in the southern reaches of the borough, in and around Marine Park, a neighborhood that was supposed to be the next great middle class pleasure playground, but then development, of two train lines, a beach resort and more, were halted just before WWII. The bulk of the action takes place in the 19070s through present day, though one standout follows a Brooklyn College graduate to the Manhattan Project at Los Alamos National Laboratory.

That’s not to say that the stories are exactly interconnected; some are quick vignettes starring characters you only meet once. Others don’t even name their players, and herpes, yes the STD, is the main character in one memorable piece. The Favero family, specifically the brothers, Lorris and Jamison, thread throughout the collection, but not following or building upon any particular narrative arc. The boys are Chiusano’s peers, and their experiences, of shoveling snow for cash in the winter, of riding the city bus, of the particular gravitational pull of a small town neighborhood perched on the edge of a global city, make for the most vivid, emotionally rich reading in Marine Park.

Chiusano, who grew up in Marine Park, is ridiculously young–23 to be exact. While Lorris and Jamison, the characters who track mostly closely with his own experience are the most evocative, the sheer range of human experience and emotional depth that he reaches in this debut reminds me of reading White Teeth, the incredibly precocious novel that Zadie Smith wrote while in her final year at Cambridge. Obviously, this is a writer to keep an eye on, and while I enjoyed Marine Park immensely, I’d still rather read a novel, and I hope there’s one coming from Chiusano soon.