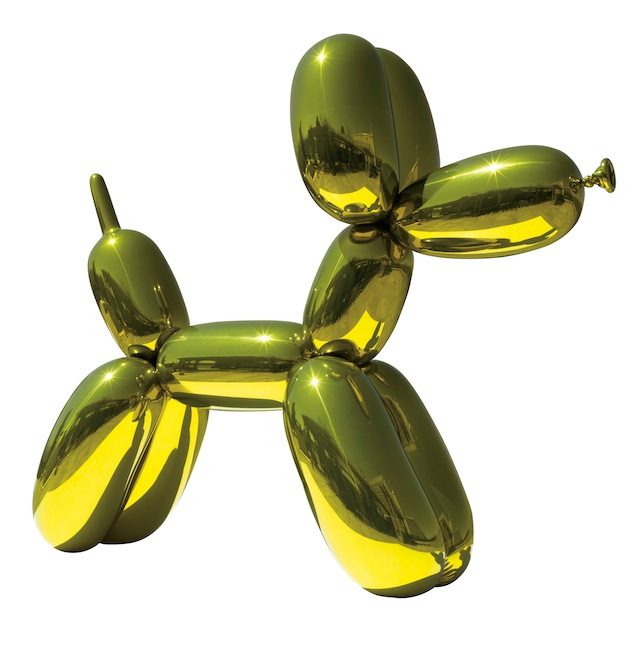 What child can resist balloon animals, even one made of steel?  Jeff Koons’ “Balloon Dog (Yellow),” photo courtesy Whitney Museum

The Jeff Koons retrospective at the Whitney Museum (the last hurrah before the museum moves downtown) is four floors of surprises and astonishing sights. The artist is quoted in the museum’s family guide as saying, “If you follow your own interests, it can take you to a very magical place.” And with the blink of an eye, my kindergartener and I were transported to a land of shiny objects and floating toys.

There’s no doubt that Jeff Koons is one of the more divisive artists. (In August, a man vandalized one of the walls of this exhibit when he splattered his own blood in the shape of an X.) Many critics have dismissed the superstar artists’ work as vapid and expensive, so Koons is used to controversy. Surprisingly, in spite of being one of the most contentious living artists, his work is (mostly) child friendly.

My son’s favorite piece was a large painting of a Lego farm scene, in which the pieces were recognizable from my son’s own bedroom. A close second was an actual organ made into the shape of the Incredible Hulk. There’s lots for kids: the mirrored balloon dogs (one of which sold for $58.4 million last year), basketballs suspended in equilibrium tanks, a shiny metal rabbit, and inflatable pool toys. The “Banality” series of sculptures includes a Pink Panther, a pig surrounded by angels and the incredible Michael Jackson and Bubbles piece. The “Easy Fun” series of mirrors in the shapes of cartoon animals was also a hit for us. My son’s jaw dropped at “Play Doh,” a hyper realistic, ten-foot-high mound of play doh made entirely out of painted aluminum and which took 20 years to complete. The scope of textured, shiny and mirrored materials used in so much of the work is an indication of the artists’ quest for perfectionism, but never takes away from the fun factor. 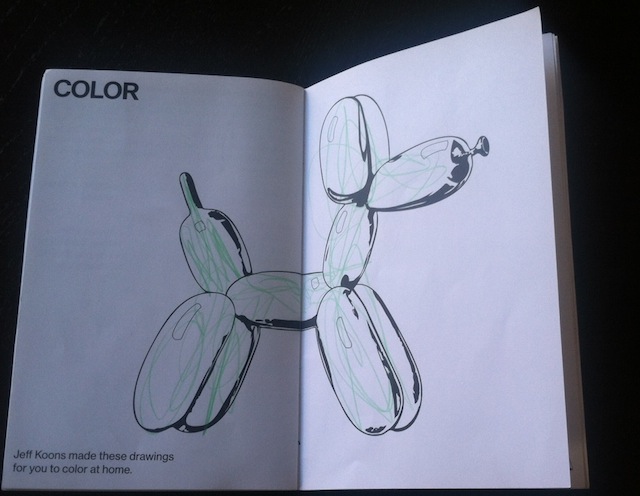 Before getting too comfortable with this family outing, you may want to steer your children away from the “Made in Heaven” floor. We breezed through it and didn’t make a big deal about the larger-than-life paintings depicting the artist and his then porn-star wife, La Cicciolina, engaged in a wide variety of extremely intimate positions.

We’ve brought our son to more exhibits than I could count in his short five-year-life, and it’s hard to know if anything stays with him. A few weeks after attending this retrospective we were at a party where a man was twisting up some balloon animals. “Look at that,” my son exclaimed. “It’s a Jeff Koons!” Finally, art that made a lasting impression! Talk show host Stephen Colbert once joked that Koons “is the world’s most expensive birthday clown,” and really, who doesn’t love a clown?

Jeff Koons: A Retrospective- Whitney Museum of American Art– 945 Madison Avenue at 75th Street. Through October 19th, 2014, with a special family day on Sept. 27. The Whitney has expanded its hours for the duration of the exhibit, and is now open on Mondays: Monday 11 am–6 pm; Tuesday Closed; Wednesday–Thursday 11 am–6 pm; Friday 11 am–9 pm; Saturday–Sunday 11 am–6 pm