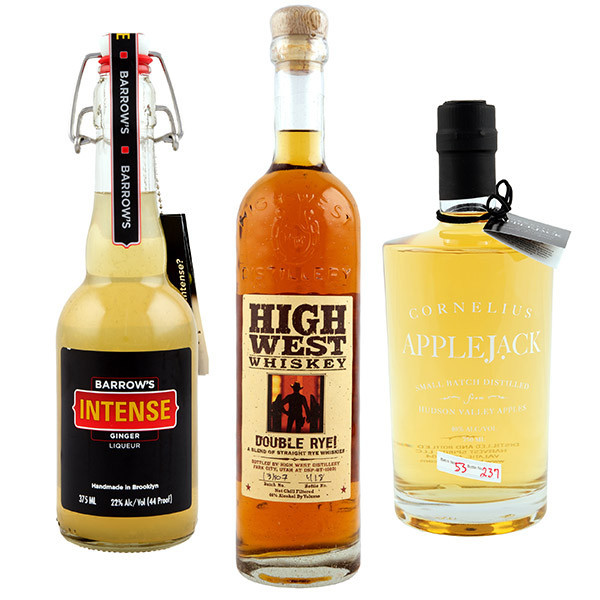 A decade or so ago, the standard apartment warming gift among my group of friends was a liter of Jack Daniels, or if you were really feeling fancy, Maker’s Mark. Now, in a time when it seems like everyone suddenly has a “home bar,” and that home bar is stocked with multiple varieties of bitters and $18 Luxardo cherries, I’ve noticed a clear shift in preference toward the more obscure labels—the kind that look austere and old-timey but probably result from a healthy graphic-design budget–that signify small-batch booze production. Yes, I realize that at this point just hearing words like “small-batch,” not to mention its eyeroll-inducing pals “artisanal” and “bespoke,” is enough to make you want to immediately go SuperSize it at the nearest McDonald’s out of pure spite, but there’s no reason to get reflexively annoyed in this case. A nationwide trend toward relaxed distillery regulations has created a huge and competitive market for spirits that are created with local ingredients, minimal additives, and extreme care about the quality of the finished product.

In short, we’re talking about alcohol that is well-made by people who really care, and that is definitely something to drink to.

Dave Herman is the general manager of the spirits and wines division of Mouth, which is like an Etsy for small-batch food and drink, with a brick and mortar shop in DUMBO that showcases indie bottlers from all over the country. He says that ten years ago, a store like his would have been ridiculous. Now, he stocks 160 different varieties of indie booze from 26 states, and to hear him tell it, the small-batch spirits craze is just getting started. Herman thinks craft distilling is on a similar trajectory as craft brewing was several years ago. “Small-batch beer started out as a sideline, cult thing and then it was really everywhere,” Herman says. “The quality took the leap with the increase in volume, and that’s what we have here [with liquor].”

But with all of this volume and quality, how does the average consumer (who may or may not have been exclusively drinking Genesee Cream Ale all summer) know where to start? We enlisted Herman and another expert with small-batch bona fides, Talitha Whidbee, of Williamsburg’s Vine Wine, to give us some pointers just in time for fall.

So far, whiskey still seems to be the most popular category in the indie booze market, but gin is not far behind, spurred by a cocktail culture that shows no signs of fading away. According to Herman, gin is especially exciting when made in smaller quantities, because it gives the distiller the ability to experiment with the botanicals and the strength of the juniper in order to put his or her own unique stamp on the final product. Whidbee explains that when it comes to gin, her strategy for stocking the shelves at Vine is to look for a product that both satisfies a need and is interesting to her. “It could be something like the Breukelen distilling gin which is not a London Dry Style, or something that I have never heard of before like the Chief Gowanus made by New York Distilling,” she says. (If you’ve never been to The Shanty, the bar attached to NY Distilling, their drinks will renew your interest in cocktail culture, and they have a killer happy hour.)

Because of a lack of transparency in the industry, imbibers should be aware that not everything that claims to small-batch actually is, so Whidbee advises buyers to seek out “an easy to find face behind the brand, not just a story, and a spirit that is made for a specific reason, not just another gin.” Among her favorites right now are Barr Hill’s gin, which is made from honey in Vermont and is “ridiculously delicious,” and The American Gin Company’s Averell, which is made with New York State damson plums and is the perfect base for a Sloe Gin Fizz.

Another trend worth taking note of is the barrel-aged cocktail, which is premixed in advance and casked so that the ingredients are given time to meld together and soften. Whidbee recommends “anything by Fluid Dynamics,” including The Saratoga, a brandy-based Manhattan made from ingredients produced by three small distillers: Germain-Robin brandy, Low Gap whiskey and Vya vermouth. For its part, Mouth offers a Manhattan cocktail kit that contains everything you need to mix up a traditional version of the drink, made with whiskey from Breuckelen Distilling. Herman has also created a special package of three of his favorite seasonal bottles in the Fall Spirits Taster, which includes Barrow’s Intense Ginger Liqueur, Double Rye by High West Distillery, and Cornelius Applejack, an aged apple brandy from an orchard in upstate New York. He says that a splash of the Applejack can take your fall standbys–hot apple cider or mulled wine–to whole new level, but what he really loves is the ginger liqueur, which is made in Brooklyn and indeed intense, served on the rocks or floated on a flute of prosecco or cava for a new twist.

Herman’s number one piece of advice to anyone curious about the exploding new market of small-batch spirits is to just try whatever is being poured. “Give it a chance, put aside the brand you usually drink,” he says, “there is an amazing range of flavors out there and this is a really exciting moment to be a part of in terms of American spirit production.”