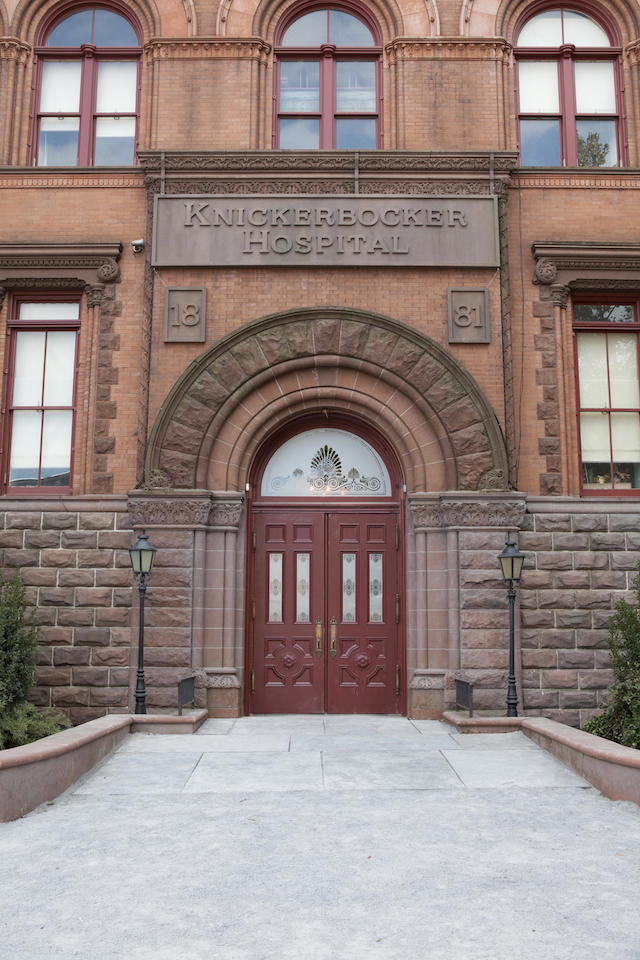 The exterior of The Knick is actually the Boys High School in Bed-Stuy. Photo: Cinemax

The New York depicted on The Knick is both utterly recognizable to present-day inhabitants and also another place all together. And a lot of it is filmed in Brooklyn, from The Knick itself to the sets at the show’s Greenpoint studio. We chatted with Howard Cummings, the show’s production designer, who also worked on Behind the Candelabra and Contagion with Knick director and showrunner Steven Soderbergh. 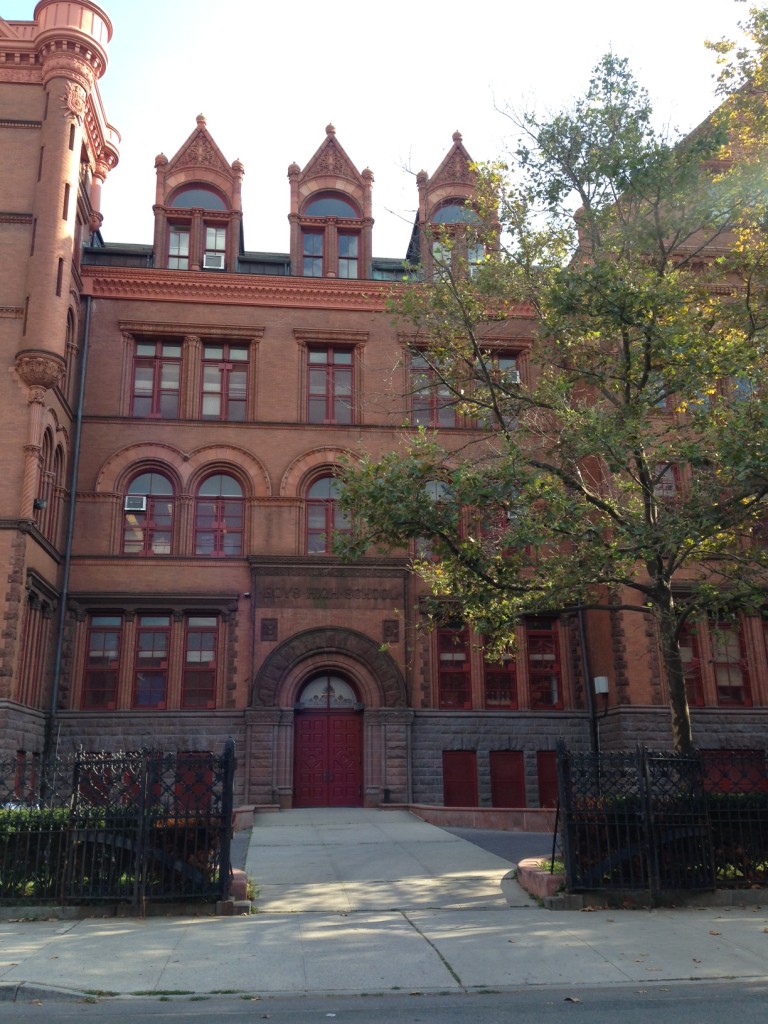 Boys High School in Bed-Stuy, as it looks today. Photo: Brooklyn Based

Brooklyn Based: You filmed the exterior of the The Knick, the hospital the show is named for in Bed-Stuy at the Boys High School, which was landmarked by the New York City Landmarks Preservation Commission in 1975. Why that building?

Howard Cummings: The heart of the story is the hospital, and the fact that the hospital had to be modernized and it was struggling. For me it was very important to choose an exterior that represented the Gilded Age, which was fading, going away in 1901. Manufacturing and the sense of uniformity was starting to become part of society, and I thought our hospital had to reflect that. The Boys’ High School is a really great example of kind of Romanesque, Victorian architecture. All the windows are all different and there lots of hand detailing and different carvings like terra cotta lions heads, which meant to me the interior could have things that were unique to itself, and a little bit chaotic, as opposed to a modern vision of hospitals, more uniform. 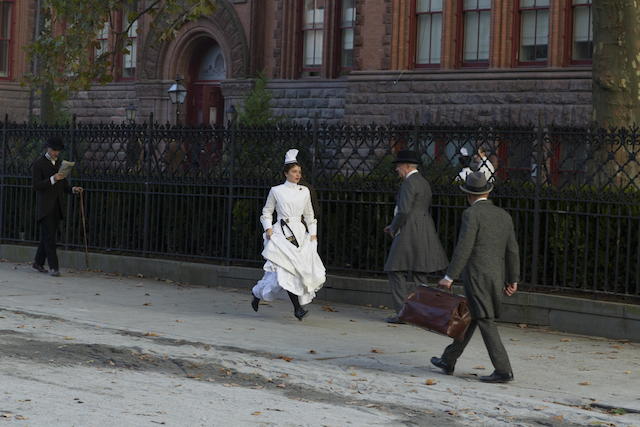 So what were some of the logistical issues, taking New York back in time a century?

It was all about the blood, making the blood stand out.

One of the big things we did on The Knick to make things feel more period was dirting streets. Which was challenging because the city was only willing to do it if we met certain safety standards–nobody I guess ever took it on quite like we did. I learned a lot about dirt. [laughs] Like if it’s below 32 degrees we couldn’t actually use dirt because if it rained it would freeze and you couldn’t remove it. So we had to use a gravelly mixture that would always be able to be removed quickly.

For instance at the Boys’ High School, in Bed-Stuy I knew that we were going to do some very high angle shots on cranes, to show the neighborhood, which is quite nice. That neighborhood has quite wide cement sidewalks, but in 1901, cement sidewalks were not very prevalent. They started coming in, from what I can tell, after 1904. So they had stone sidewalks made of bluestone, and so to make it all blend away I used a light gray sand and it sort of made the sidewalks go away, because there was no definitive line between the road and sidewalk.

I realized that the hospital, which we were building almost all the interiors for, the interior of the hospital is all colors of gray, white, black and the only color I would say would be wood–it was all about the blood, making the blood stand out.

So you balanced historical accuracy with sets that reflect the central themes of the show?

Steven’s whole take on doing the project was that he wanted to take a modern view on it, to say that era was similar to ours in that technology was starting to explode and it was changing people’s lives more quickly than they could actually adapt, kind of like how the internet is changing our lives. I knew that we weren’t going to do a nostalgic view of New York. I heard him [Soderburgh] say once, after you watch the first ten minutes, most people’s reaction is, “Thank god I didn’t live in 1901,” [laughs} because of the gory surgery, which we did very, very realistically.

In the show you use actual medical instruments from 1901 whenever possible, sourced from collections all over the country. All that medical research must have been…really something. [MILD SPOILER AHEAD]

There’s a syphilis victim whose cartilage has been eaten away by the disease and has taken her nose. Part of my job was trying to figure out what degree of nose was left. So I had to look at medical photographs of people who had this terrible condition. We even got a pair of the glasses with the fake nose attached, which were real. 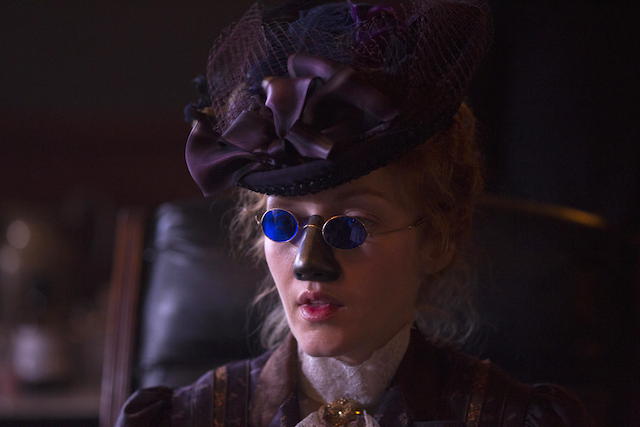 Jennifer Ferrin plays Abigail Alford, a woman whose nose has been destroyed by syphilis, seeking a skin graft at the Knick. Photo: Mary Cybulski/Cinemax

I have a question about that! The glasses-fake nose combo she wears on the show is very jarring to look at because the nose is made of flat, gray metal. Why wouldn’t they have painted that to blend in with her face more? Or was that your choice?

The real one we got had lost its paint. It was hard to tell because we only had black and white research materials–it seemed to me they would have painted it. But Steven saw the unpainted one and said no, leave it that way, I guess because it was more shocking. That maybe wasn’t the most accurate thing, but the particular woman, the character on The Knick seemed to not be embarrassed, she accepted her fate–she was perfectly happy to walk out of the hospital with her arm strapped over her head [part of a primitive skin graft treatment], so it could be argued that she didn’t care that the nose didn’t match.

So it was a reflection of her character.

In terms of historical accuracy, has Mad Men changed the game for art directors and production designers? Has Matthew Weiner’s obsession with nailing everything from current events, to office equipment to clothing raised the bar?

The historical part of it has become as fascinating as the storyline, and I think people prefer to know that. It makes you want to Google stuff all the time. A friend of mine designs Mad Men and sometimes I argue with him about the year something came out. There was one episode where they had something on I said, ‘That hadn’t come out yet!” and I went and looked and it turned out I was wrong. So I had to back off.

Those same arguments are happening on couches all over America, even if we’re not production designers–we all have Google.

That’s part of the fun of watching, don’t you think?

Absolutely! There have been a lot of shows filming around North Brooklyn lately, and I’m not just talking about say, Girls, which is set there. The Good Wife was all over the neighborhood this summer and it’s fascinating to think of you shooting Gilded Age New York, just blocks from where another production is shooting Chicago by way of Brooklyn.

Brooklyn works for Chicago because the buildings are lower–it’s sort of Chicago neighborhood looking. I can see why they’d do it. I had similar issues, and it had to do with heights of buildings as well. In 1901 the Flat Iron Building was just completed and it was a skyscraper.

You shot all over Brooklyn. In addition to recognizable structures, like Boys High School, are there any Brooklyn scenes that have been transformed in a way that we won’t recognize without you telling us?

We have a scene where there’s a woman who has had a botched abortion and she’s buried in a potter’s field. So we did some research on potters fields and we found that island…

Yes. It was only part of a day of shooting for us and there was no way we were going to travel to Hart Island. So there’s a little inlet right in Greenpoint and it has trees, it’s very overgrown. They used to build Civil War ships there and they built the Merrimack there [it was actually the Monitor, built to battle the Confederacy’s ironclad, The Merrimack]…

Yes! I would walk by it every day, and then we went out there and I said, if we shoot in this direction and we get the water, it really feels isolated and natural. And then the other side, we could replace digitally, so that’s what we did. We shot what seemed to be an island, two blocks away, in Greenpoint, from our studio. One studio day we just ran out and shot it. That was fun, because you just don’t expect to find in New York a grassy, leafy, wild inlet.

This interview has been condensed and edited for length and clarity.