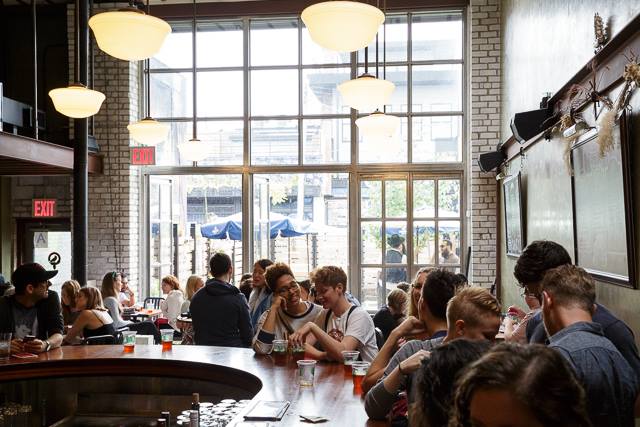 There are lots of adventures in store this week that will inspire you to break from your familiar haunts. Open House New York returns Saturday and Sunday, when you can take behind-the-scenes tours of famous homes, distilleries and architectural gems. You can also go on one of these Brooklyn outings, like a bike tour of the Navy Yard that will show you a greener side of the former shipyard. Our Prospect Heights Immersion on Saturday is another way to guarantee that you get out and explore spots you haven’t checked out yet, like Berg’n. The CBGB Festival may tempt you to intentionally visit Times Square to see DEVO and Jane’s Addiction for free. And next week, a group that commemorates the treasures hiding beneath New York waters is celebrating its five-year anniversary with oysters and beer.

We’ve uncovered more awesome events for you this week, and have some suggestions for fun days ahead. Jonathan Lethem’s upcoming talk about the 1970s Brooklyn setting of his novel-turned-musical, The Fortress of Solitude, is halfway sold out. And make reservations now for a tour of a ship graveyard aboard The Water Table, the floating tavern that will return to departing and dropping off in Greenpoint next Thursday.

Thursday, Oct. 9: Greenlight’s comedy show Steamboat draws from the same uber-talented comic pool as every other night of stand-up in Brooklyn, only many of the funny people here translate their humor to the page, either online or in laugh-out-loud books like Dave Hill’s Tasteful Nudes, whose title essay is about the time he reported on a nudist group’s dinner party in Sheepshead Bay. He’ll be at tonight’s installment along with Dan Kennedy, host of The Moth’s podcast and author of books like American Spirit and many hilarious pieces on McSweeneys. Evan Allgood and Amanda Duarte a Funny Story alum) join the group, and Bob Powers hosts. It begins at 7:30.—N.D.

Friday, Oct. 10: If you are old enough to have bought compact discs at your local big box retailer before the days of the download, chances are a few of those purchases were a Hollywood movie soundtrack album. The 90s had many notable movie soundtracks, among them Clueless (a mix tape of 1995’s Next Big Things, including No Doubt, Radiohead, Coolio, and the Mighty Mighty Bosstones) and Angus (one of those strange instances where the soundtrack garnered more praise than the actual movie). Included on both of those compilations were cuts from The Muffs. Fronted by Kim Shattuck, they are a raucous punk rock power trio from Southern California, with everything you might expect from such a band: loud feedback and pounding drums but also a fondness for bright melodies and occasional double-tracked harmonies.  Looking back, The Muffs are one of those bands that never seemed to get their due, despite the fact that they brought the same punk rock snottiness and hard-hitting riffs that made Green Day rock radio staples. Shattuck, who has one of the best screams in rock n’ roll, seethes with a rage that makes Courtney Love seem as tame as Natalie Imbruglia. She recently grabbed some attention when she took over bass duties for Kim Deal in the Pixies last year. Since dismissed for reasons Black Francis won’t fully disclose, the popular belief is that her Pixies pink slip was punishment for stage diving. All of this means that she’s back to touring with The Muffs in support of their latest pop-punk album “Whoop Dee Doo,” and you can see them at the Bell House tonight, as part of the CBGB Festival. Tickets are $15.—A.J.

Saturday, Oct. 11: Back in August, after Berg’n opened, we predicted that you would end up here “for just about every Brooklyn birthday party over the course of the next year.”  If that hasn’t panned out yet, Saturday’s Prospect Heights Immersion will ensure that you get to drink  at the brand-newish beer hall, even if it means a slight detour to Crown Heights on your four-bar tour. Also part of our day of drinking with Brooklyn Brewery is lunch at either Dean St. or Citrico, a Mexican restaurant we love, plus deals like 20% off at the gift shop Color Bklyn, and discounted entry at both the Brooklyn Museum and Brooklyn Botanic Garden. Tickets are just $20–incentive alone to leave your neighborhood and check out a new one.—N.D.

Sunday, Oct. 12: You may not think you’re in the market for creepy housewares and ouija boards, but a visit to the Day of the Dead Flea Market at the Morbid Anatomy Museum may inspire you to bring home something macabre in time Halloween. (To go along with your decorative gourds, of course.) Like their Holiday Fair, there will also be plenty of taxidermy, and we know at least one vendor planning on bringing a large, stuffed turkey, which would be a pretty amazing centerpiece.—N.D.

Monday, Oct. 13: If you have a fondness for schlocky ephemera, like old exercise videos, bits of random strangeness, like other people’s to-do lists and the weird vastness of the literal dustbin of history, Found Vs. Found at Union Hall should be your dream event. Davy Rothbart of Found Magazine, an annual journal cataloguing notes, letters and lists found all around the world, joins forces with Nick Prueher and Joe Pickett from the Found Footage Festival (which we profiled earlier this year), in an evening dedicated to shining a spotlight on what was once cast away. Tickets are $10. —A.G.

Tuesday, Oct. 13: Tonight, BRIC and its 24/7 TV channel, Brooklyn Independent Media, will host a community town hall at its Fort Greene venue on Race, Policing and Civil Rights in the wake of Eric Garner’s death and the ongoing civil unrest in Ferguson, Mo. Panelists will include local figures like City Councilmember Jumaane Williams, Esmerelda Simmons, executive director of the Medgar Evers College Center for Law & Justice, and Rinku Sen, publisher of Colorlines, and conclude with a special performance by hip-hop artist John Robinson. The free event will begin at 7pm at 647 Fulton St. in the BRIC House Ballroom, serving as the first in a series of public discussions on societal issues.—N.R.

Wednesday, Oct. 14: Most of us are not necessarily overcome with inspiration upon gazing at the East River or Gowanus Canal. For the founders of literary collective Underwater New York, it’s not just the city’s 160 miles of rivers, bays, creeks, inlets, and ocean that act as muse, but more importantly what lies beneath our waters. Nicki Pombier Berger, Helen Georgas and Nicole Haroutunian curate a list of objects—from wildlife to shipwrecks to the bodies of mafia members to the submerged piers of long forgotten Coney Island attractions—that serve as prompts to artists and storytellers who re-imagine New York City from this seldom-seen angle. In the last five years they’ve published work in a variety of mediums from over 100 contributors, and on Wednesday they’re having an anniversary party and fundraiser to celebrate, with craft beer and nautical drinks provided by The Gate, Coney Island Brewery, Van Brunt Stillhouse, and Waterfront Wine & Liquors, as well as Island Creek Oysters from Duxbury, Mass. Attendees get to peruse a selection of once-underwater objects from the collection of Staten Island diver Ed Fanuzzi, participate in a silent auction, and see two short film screenings: Nicole Antebi shows her animated ode to Gowanus, “Riparianism,” and Charis Emily Shafer’s documentary about a Sheepshead Bay couple in the aftermath of Hurricane Sandy. Plus, everyone goes home with a UNY tote and print by a contributing artist. It all takes place at Dumbo Sky, 10 Jay Street, at 8PM. Tickets range from $35-100 donation and are on sale here.—L.R.